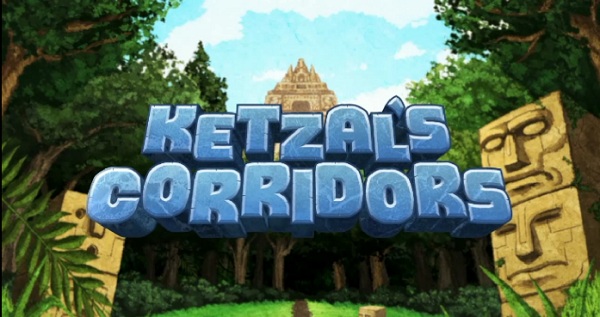 Despite sporting a completely different name, Ketzal’s Corridors is more or less a sequel to 2010’s Thruspace, a WiiWare title that had you maneuvering  blocks through gaps in walls. While the WiiWare title suffered from a rather lackluster presentation, Ketzal’s Corridors has taken a simple concept and expanded it into a full-fledged eShop title, one that is on par with titles like Mutant Mudds and Pushmo.

From a pure gameplay standpoint, Ketzal’s Corridors hasn’t changed much from its predecessor. It is essentially an on-rails version of Tetris; you’ll be moving, flipping, and rotating Tetris-like blocks through walls. By using either the Slide Pad or the D-Pad to move your blocks, and the face buttons to rotate them, you’re tasked with maneuvering your guardian (more on what a “guardian” is later) through the walls of ancient temples and tall towers in order to progress. While you can stumble your way through most of the single-player levels, the replay value comes from obtaining high scores, which is done by collecting hearts and maintaining a combo as you move from obstacle to obstacle.

But what really sets makes Ketzal’s Corridors stand out is its presentation and value. The stale and barren environments from ThruSpace have been replaced with temples and ruins, with snow, jungle and desert environments. While there is a story, it serves only to provide context for playing, but its rather silly nature is endearing. The game is set in a Mayan world created by the god Ketzal, where an evil force has taken over the land. You play as a variety of guardians (which are essentially different Tetris blocks with unique shapes) who need to traverse different temples to collect enough hearts to defeat Koruptal, who has stolen the source of Ketzal’s power: his sacred hearts. 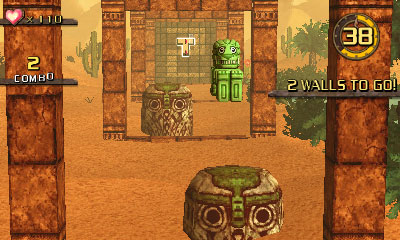 The game’s visuals are well done, but it’s the 3D effect that really stands out. As you speed through levels, the 3D helps when you’re guiding your guardian through tight gaps, and it all looks great thanks to the game’s sense of speed. While the music won’t stick with you after you close your 3DS, it suits the game’s setting, and it won’t have you complaining. Likewise, there is no voice acting, but there is very little dialogue to begin with.

Ketzal’s Corridors boasts a lot of replay value, which for the asking price, is just icing on the cake. The game’s single player contains close to 100 levels, which will have you zooming through temples, solving puzzles, and racing against the clock. The variety is surprising, and you’ll be replaying levels to perform tricks, collect hearts, and beat your best time in order to get higher scores. While the level progression is matched with a fair difficulty curve, there are times where you will have to memorize some sections in order to get a high score, simply because the level moves too quickly. If the lengthy campaign isn’t enough, Ketzal’s Corridors also has a multiplayer mode. There’s an option to duke it out on one system, with one person using the face buttons with the other using the D-Pad. You also have the option to play locally, but each player will need his/her own system and copy of the game. Despite only having a few modes, the multiplayer is actually quite good, and adds some longevity in case you have finished the single player story.

Ketzal’s Corridors offers a polished and addictive experience that is a good take on what would otherwise be a half-assed form of a 3D-Tetris. With nearly 100 levels to conquer, and a multiplayer mode to boot, it’s a great addition to the eShop, and one every puzzle fan should own.

Disclosure: A copy of the game was provided by Nintendo of America.