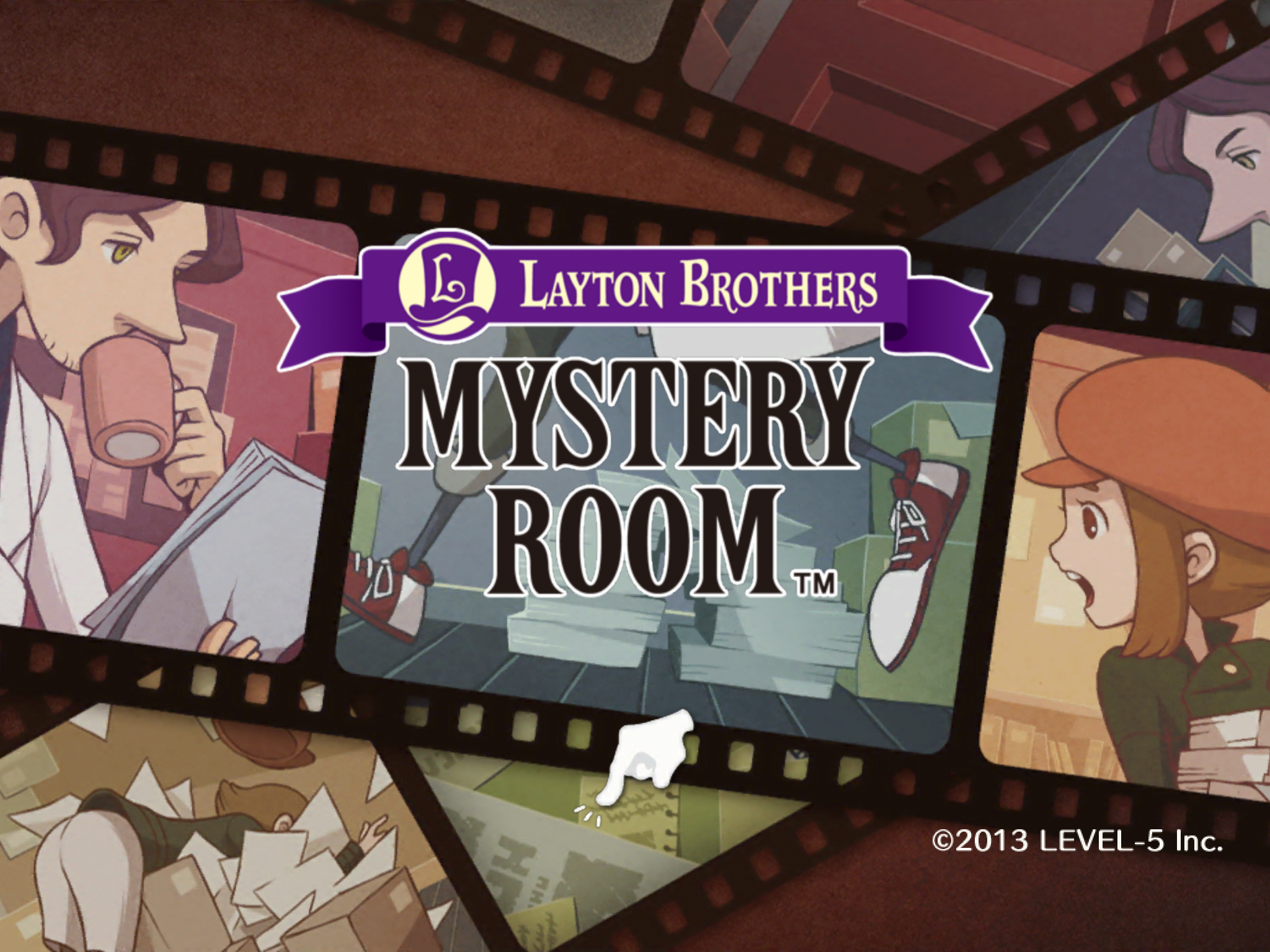 Layton Brothers: Mystery Room is an iOS game from Level-5 that follows rookie detective Lucy Baker and mild-mannered inspector Alfendi Layton on some of the most puzzling cases in Scotland Yard. As the name implies, Mystery Room is a spin-off from the Professor Layton games, but it didn’t start that way. Level-5 originally intended to make Mystery Room part of a completely different puzzle series, but later they decided to rebrand it as a Layton title, instead. That said, Mystery Room is definitely fun, though its Layton trappings might not be enough to entirely please fans of the original professor’s adventures.

If you go into this game expecting to explore colorful towns, seek out hint coins, play cute minigames, and discover brain teasers galore, you may be disappointed, at first. (Mystery Room actually shares more gameplay DNA with the investigation portions of the Ace Attorney games, which will be a plus if you enjoy that series.) Each case starts with a list of suspects, and after you inspect the crime scene, you have to guess who the culprit is. Once you take a guess, Alfendi tells you who he thinks was responsible, and the investigation begins in earnest. Every case is missing a few facts (Where is the murder weapon? How could the killer have gotten in and out of a room that was locked from the inside? Why on earth is the victim’s hand inside a fish sandwich?), and as Lucy, you have to review witness accounts, correctly identify inconsistencies, and scour the crime scene to find answers.

You examine crime scenes from above, with the roof cut away and yellow circles to guide you to the evidence. When you focus on an area, zooming further in with a slider reveals specific objects—the corpse, a bullet hole, and so on—that you can gather information from. If you need to look at things from a different angle, you can rotate the scene by swiping one finger left or right on the screen. You can drag the scene left, right, up, or down by swiping two fingers in your desired direction. The investigation controls are smooth overall, and you shouldn’t miss any evidence as long as you zoom in all the way on every focal point.

Some evidence won’t be useful to your case, but some will help you poke holes in witness testimonies to get to the truth. When you present evidence to a suspect, it fires at them like an arrow, and if it was the right piece, it chips away at a heart that indicates the person is hiding something. If that heart crumbles from enough evidence, you’ve unmasked your criminal. You don’t even need to worry about presenting incorrect evidence. Alfendi just tells you to try again until you get it right, and the only “penalty” you’ll experience is the occasional sharp retort from him. This can be a downside because it removes any challenge of working things out yourself, but if you’re having trouble making the right leap in logic, at least you don’t have to worry about starting over.

With all this CSI stuff, Mystery Room probably sounds like a total departure from the series proper, but it definitely keeps some of the Layton spirit. (This might be due in part to the fact that game designer/director Tatsuya Shinkai also filled the same role on Curious Village and Diabolical Box.) One series mainstay that you still see here is a plucky assistant and an interesting, encouraging “professor” figure. At the start of the game, Lucy Baker is assigned to work in the titular Mystery Room under Alfendi Layton. They hit it off, and when Alfendi tells the new girl not to worry about formalities, she decides to call her mentor “Prof.” He doesn’t like it because his father is our favorite archeology professor, Hershel Layton, but the nickname sticks, making him this game’s “Professor Layton.” (It’s a forced parallel for sure, but its heart is in the right place.) As the two detectives solve a series of murder cases, Lucy discovers that something isn’t quite right about the Prof: he has a dark side that he can’t control, and its origin proves to be one of the biggest mysteries of the entire game.

Another important trait that Mystery Room shares with the main Layton series is an excellent plot with memorable characters. Though the first two full cases in Mystery Room are available for free on the App Store, the plot alone is well worth the $4.98 it costs to buy the other seven. Each case builds the story to a big twist at the end, and Lucy saves the day hands down. (She actually channels Emmy a bit in her independent personality, minus the martial arts.) While Lucy and Alfendi are definitely the best developed of the characters, even the ones that only show up for a single case will leave a lasting impression. Between the little details you can see in the character art and the well-written (if cheesy) dialogue, you really get to know everyone you meet in Mystery Room.

Though the dialogue is well-written, I did have one minor nitpick with it. Any time the characters speak in a particular dialect, it’s written out exactly as it would sound instead of in standard English. Though this does help give the characters some extra personality that would normally be made up for in voice acting, it was grating to read. If you don’t find written-out accents annoying, you should be fine.

Getting back to the characters though, their hand-drawn portraits will make fans of the art style from the Nintendo DS Layton games feel right at home. Character designers Hiroko Shiino and Miki Inoue have both worked on previous Layton games, and these characters would fit in seamlessly with Luke and the professor. Apart from the art itself, the graphics in Mystery Room aren’t anything special, especially if you’ve played the main series Layton games. The character portraits are a bit pixelated on the iPad, and though the crime scenes themselves are actually 3D-rendered, they’re blocky and not very detailed.

Unlike the character art, Mystery Room‘s OST doesn’t feel like it belongs in a Layton game at all; you won’t find a single accordion note here. Composer Yuzo Koshiro has, however, crafted a jazzy soundtrack that’s an absolute joy to listen to, and the score really adds to Mystery Room‘s noir ambiance. The only downside is that none of the songs are very long, so the music can get repetitive if you’re not good at letting it fade into the background.

Even though Mystery Room does capture a lot of the spirit of the original series, this game definitely has more of a mature feel to it than you’d expect based on the other Professor Layton games. If you’re buying this for a puzzle-loving kiddo, then be warned: the App Store rating of 12+ is there for a reason. Every case in this game is a murder, and the victims die in all sorts of inventive ways: throttling, an axe to the head, being set on fire…You get the idea. The crime scenes aren’t very realistic, but some of the corpses do lie in pools of blood. If you are thinking of buying this for a child, just read the rating on the App Store page, download the free version, and play it yourself first to make sure you’re fine with it.

Ultimately, Layton Brothers: Mystery Room is a great iOS title, as long as you don’t hold its lack of slidey puzzles and tea making minigames against it. It’s an adventure game with a fun atmosphere, great characters, and an intriguing plot. You’ll get sucked into the investigations and the character arcs from the beginning, and since the game is relatively short, it’s priced well if you want to buy the whole thing. (It’s free to play the first two cases, and you can buy the other seven in a pair of in-app purchases that cost $2.99 and $1.99 each.) Professor Layton himself may not appear in Mystery Room, but the idea that every puzzle has an answer certainly carries over, and you’ll have a good time solving every mystery this game has to offer.