What lengths would you go to in order to save your sister? In Legasista, you play as Alto, the nimble and devoted dungeon explorer, as he searches for a way to save his sister Mari. She has been turned into a crystal by a cursed relic, and after searching ruins after ruins, Alto has learned that there is a way to turn her back somewhere in the Ivy Tower. The millennium-old tower, unfortunately, is overrun with monsters and traps, and Alto will need the help of an amnesia-stricken ancient weapon named Melize and others to survive the dungeons. As you go through the dungeons, you’ll find computer chips which will allow Melize to remember some of her functions with the hope that she will finally regain the ability to change Mari back.

Of course, you’re not alone in the tower, but there aren’t that many characters in the game. Along with the main characters, there is the aptly-named Ms. Dungeon who helps guide you through the dungeons, the greedy witch named Leina, Leina’s robotic assistant Shout, the genetically-enhanced Mimily, and the speedy thief Volks. The list of characters does not run terribly deep, and most of the characters themselves are pretty archetypical and shallow. Perhaps the best character in the game is Sprouty, a female bean sprout that guides you through the tutorial and falls in love with Alto in the process. She spends the rest of the game calling the other girls harlots for taking Alto away from her. While the characters and story are fairly humorous at times, overall the development is thin. That being said, it’s good enough to keep you playing.

Legasista is made by System Prisma, who also created the two Cladun PSP titles, and it shares many gameplay features with its cousin. You spend virtually all of your time either at your home base or searching through the dungeons. Every few dungeon levels, you’ll have a short series of dialogue to advance the story. This is where you’ll gain a little insight into how Mari and Alto got into this situation or where Melize will gain a new function that you can use back at the base, but these vignettes are mostly a means to string you along from one dungeon to the next. 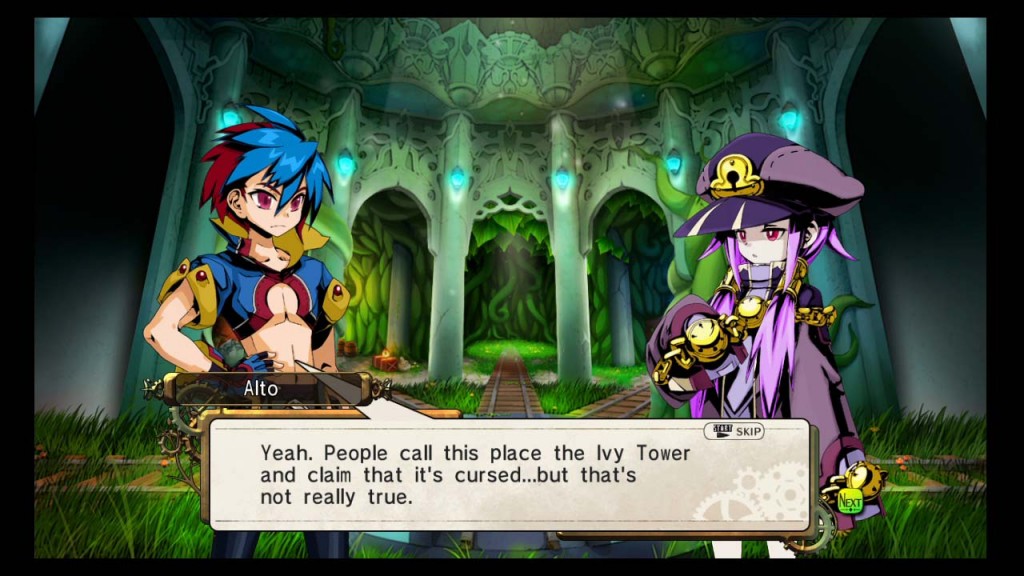 At your home base, you can spend a ton of time prepping for your next adventure thanks to the level of customization Legasista offers. Each character has access to 6 classes: explorer, warrior, pyro (fire mage), cryo (ice mage), thief and war mage, and characters can switch from one class to another once they reach level 20. As you level each class, they will unlock “energy frames.” These frames determine what that character is allowed to equip; one pyro frame may allow for 3 fire spells, 3 MP boosters, a knife and some armor while another may only allow one spell but 4 MP boosters plus weapon and armor. The different frames let you customize the character’s fighting style to whatever suits you best. Each piece of equipment has a mana cost and a durability, which can be modified by various titles you can place on them. Each slot in an energy frame has a mana value which goes up as you level, and equipment must have a lower mana cost than that value to be set in that slot. Durability is how much damage each piece of equipment can take. Once the durability gets to zero, the item breaks and can’t be used during the rest of that dungeon adventure; however, once you return to camp, all broken pieces are repaired.

Legasista also has a pretty extensive character customization system. You can customize your non-story characters to look like anything via the in-game editor, or you can upload a picture to use. In addition to the character’s looks, you can set them up as any of the six classes as well as certain character traits that modify their abilities and personality traits that determine what they say at the base. Once you’ve created these new characters, they too have all of the same customization options that the story characters have when it comes to equipment and spells.

Once you have your team set up, you can venture forth into the dungeons. Most of the levels are fairly quick, taking only a handful of minutes to complete the first time through, but they require a combination of planning, reflexes and observation. As the game progresses, not only do the enemies themselves get tougher, but the series of traps to avoid and levers to pull requires more forethought, too. Each area has its own theme: fire, ice, etc., and the levels in that area generally have one or two tricks to them. Once you figure out the trick, the levels become pretty straightforward, and as a result sometimes the game feels a little too easy.

Of course, the game would be really easy if all you had to do was run around an empty dungeon until you solved the puzzle, but there are plenty of traps and enemies around. Most of the trap triggers cause something to shoot at you from the walls, be it fire arrows or poisonous blobs, but you can also use the traps to shoot the enemies if you time it right. Since you’ll sometimes find yourself without magic against a physically immune enemy, these traps may be your only way to defeat them. The enemies themselves have the fairly standard mix of physical attackers, magicians, tanks and whatnot, but they come in unusual packages. You’ll find yourself fighting against giant squid and penguins who slide across the floor to attack you, armored sentries who can only be hit in certain spots and succubi who can summon spikes out of the floor. The variety of enemies that Legasista offers certainly keeps things fun for a good long while. 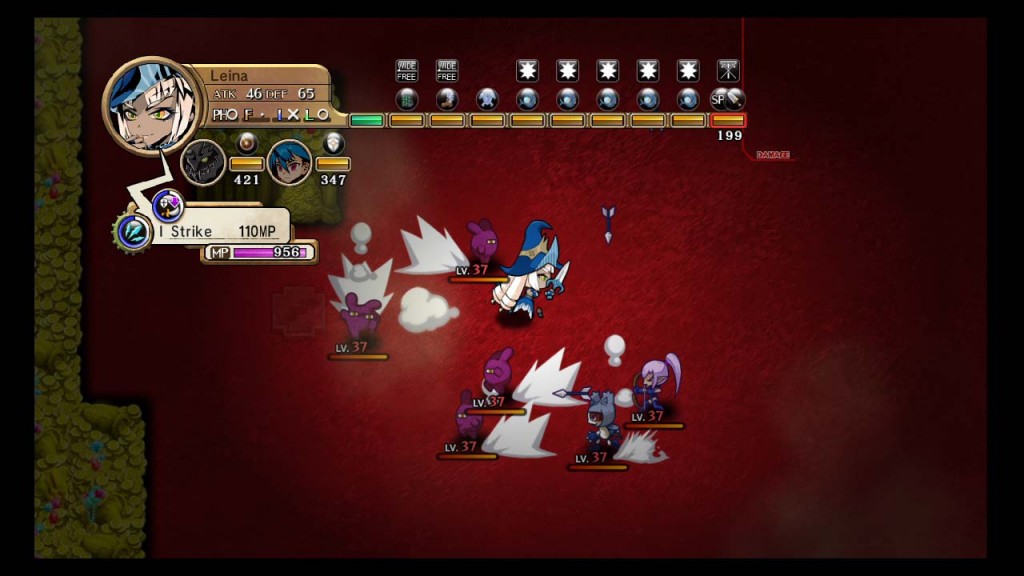 The game would get boring if you only had the set story dungeons to play, which is why Legasista offers a multi-tiered random dungeon generator. Once you unlock the “rangeons,” you’ll be able to start exploring them whenever you want. You can start with the low-level “baby-geons” and work your way up to the “demon-geons.” Each offers different levels of enemies and up to 100 floors for the harder levels. These dungeons are the best way to level and get new equipment for your characters. Just as an example, I happened to find a sword in a random dungeon that tripled my attack and doubled my durability numbers; as a result, I was able to bum rush through quite a few new levels without spending too much time grinding for experience.

The game uses high resolution sprites for all the characters and enemies. They look great for their art style, though the fact that they don’t have arms and legs connecting their hands and feet to their torso is a little weird. The character portraits that show up during dialogue are fantastic, if you enjoy the anime art style. Each of the dungeons has some differences in color palette and style that let you know which area you’re in, but they are similar enough that you aren’t shocked by the changes when you go from area to area.

Legasista‘s soundtrack is also quite fun and makes for great dungeon exploring music. As you play, you can unlock new songs by sending bean sprouts to explore for you. These new tracks keep the music from getting too stale on you as you traverse all the random dungeons. The voice acting is only in Japanese with English subtitles, which some people might see as unfortunate, but for a PSN only title, is quite understandable.

Legasista is a fun twist on the dungeon-crawler genre. You can easily get 10 or 15 hours out of the normal story mode and a ton more gameplay if you delve into the random dungeons. This game is definitely a nice option if you have the space on your PS3 to download it.

Disclosure: This game was reviewed using a copy provided by NIS America.