In what has become a yearly advertisement for its physical card game, Wizards of the Coast has released another edition of Magic: The Gathering — Duels of the Planeswalkers. With Hearthstone making waves amongst fans of collectible card games, Wizards and Stainless Games needed to bring their A-game to keep up. So how does this latest iteration of the granddaddy of the CCG fare?

For those who haven’t played the card game before, in brief, decks are typically based around one or more of five colors of mana (the game’s magic power): red (destruction/chaos), blue (wisdom/control), black (death/regeneration), white (healing/bands of smaller creatures) and green (nature/growth/large creatures). Decks feature a mixture of creatures used for attack and defense, lands which provide the mana, and spells with a plethora of uses, including altering creatures and stopping your opponent from casting a spell. Traditionally, these decks are played one-on-one against a single other opponent, but a number of other variations have appeared over the long history of the game. 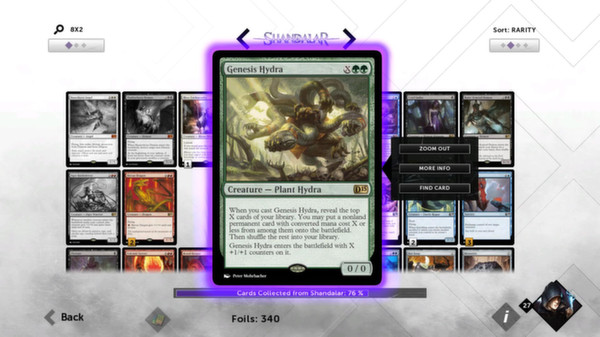 In its recent re-incarnation, Magic: The Gathering — Duels of the Planeswalkers (not to be confused with the fantastic, old Microprose title) has acted as a primer for people new to Magic: The Gathering, introducing them to the basics of gameplay using cards from some of the most recent editions and showing off some of the variants that even veterans of the classic, constructed-deck formats may not have tried. Previous editions in this series have offered up chances to play variants such as Two-Headed Giant (two-vs.-two, team gameplay) and even a modified version of Sealed Deck construction (where you are given a random set of cards and must build a workable deck with them); unfortunately, these features were stripped away in Magic 2015. The game still offers online multiplayer with up to four opponents, but there are no special variants to be found. Likely, this was Wizards of the Coast’s way of keeping the game from competing with their growing Magic: The Gathering Online system, but it does dilute the value of this game as a result. Magic 2015 also lacks the Challenge mode from previous games, where you are given a scenario and have to figure out what cards to play to win, which was a nice diversion from the main campaign.

Instead, Magic 2015 features a straightforward single-player campaign mode where your goal is to stop Garruk, whose curse has warped him to the point that he now hunts planeswalkers (the major characters in the MTG universe). You begin by selecting a deck and then travel from plane to plane, encountering various monsters and planeswalkers, using your deck to take on each opponent in turn. The AI in the campaign can be set to one of three difficulty levels, though it basically felt like you were choosing how often the computer top-decked the card it needed. Strategy-wise, the three levels of AI difficulty often felt very similar. On the easiest mode, though, the computer would occasionally make a stupid play, but never anything that would outright cost them the game. One thing that cost me several games, though, was the way that the system chose what mana to use when casting a spell. This has been fixed somewhat with a patch since release, but when suggesting which lands to tap, the game would frequently try to tap out all of the lands of one color, regardless of what else you could possibly play that turn. You have the ability to change which lands are used, but if you’re not paying attention, it’s very easy to screw yourself out of playing other spells on the same turn. The recent patch improved this somewhat, but it still offers bad suggestions here and there. 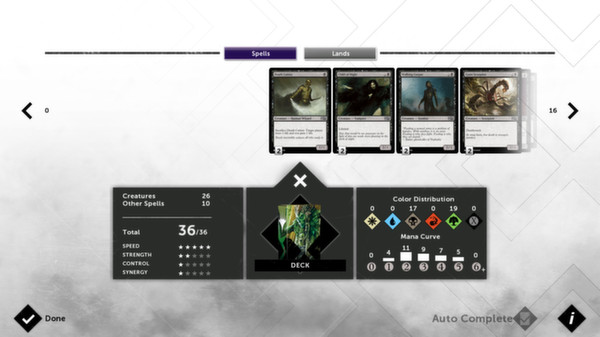 If you survive all of that, your reward for winning each match is a booster pack (a cute idea to tie it into physical Magic: The Gathering),which may or may not help you strengthen your deck before the next battle, based on the assortment of cards you receive. This plays into one of the highlights of Magic 2015: much more open and comprehensive deck-building options. Unfortunately, it often took three or more booster packs from the same plane to get enough copies of a card to make it playable, which means altering your deck is an arduous process. The catch is, once you start the campaign, you are stuck with that deck until you can amass enough booster cards to build another deck or choose to start the entire campaign over again. Because I like a challenge (read: I make bad decisions), I chose to start the campaign using a blue/green two-color deck which, while fun, has a fair number of weaknesses.  About halfway through the 10-15 hour campaign, I managed to put together a black/white lifegain deck that put my original deck to shame, and it never saw the light of day again.

Of course, if you so choose, Magic 2015 gives you the option to buy booster packs with real money ($1.99 apiece), essentially letting you pay to win, as long as you have enough money and a halfway decent understanding of deck construction. There are two issues with this: One, there are cards you can only get in boosters, making them essential if you want to complete the collection, and two, these are the same decks that you can use in multiplayer, which means that if you find yourself facing off against someone who bought all the cards, you just might find yourself having a bad time, which, to be fair, also happens in physical Magic. Outside of the occasional deck-buyer, though, multiplayer seemed to work just fine in Magic 2015. I never had any connection issues, and there were plenty of people to play. If you don’t have a local gaming store to go to, and don’t want to invest a ton of money into Magic: The Gathering Online, this can at least scratch the competitive itch a little for you. 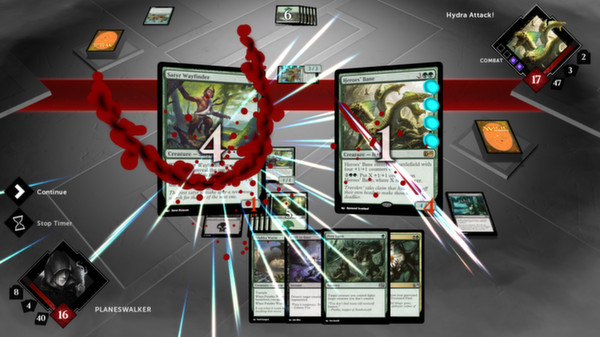 While the gameplay is lackluster, the visuals are anything but. The redesigned play area looks sleek and clean, though not too different overall from previous iterations. The card images are nice and clear, without pixelation when enlarged on screen, and there’s still an array of attack effects that appear based on what type of spell or creature is causing the damage. The overall board size is still a little small on screen, an issue that has always plagued the series, but it is not difficult to zoom in on cards if you need to read their effects again. The game’s soundtrack offers a nice ambiance for playing, though several of the songs do sound very similar, likely because their bass and drum lines don’t vary too much. While it’s better than listening to nothing, you may prefer to put on some music of your own if it gets too repetitive.

Overall, Magic: The Gathering — Duels of the Planeswalkers 2015 does what it meant to do: serve as an introduction to newcomers to the game. But if you’re looking for a more fun version, you’re better off picking up the 2013 or 2014 versions. Sure, you won’t have the newest cards and you lose some deck customization, but the game modes are definitely more fun.