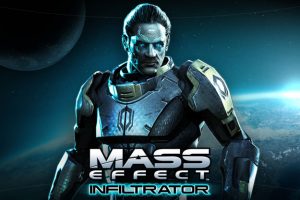 EA has left absolutely no stone unturned by undertaking an expansive marketing campaign, making sure Mass Effect 3 achieves the success they so desperately are hoping it will. The biggest surprise came with the decision of including a multiplayer component, which felt totally out of place, and was a clear indication that they were hoping to reel in more potential players. But they decided not to stop with that. In comes Iron Monkey Studios, developer of the critically successful and universally lauded Dead Space for the iOS. EA tasked them with developing a Mass Effect themed game to get the iOS enthusiasts excited about Mass Effect 3, and possibly convince them to invest in it. It all comes down to how well the developers managed to retain the feel and the overall gist of the Mass Effect universe in their new game, Mass Effect Infiltrator. So have they done it justice? Let’s find out.

Let’s clear one thing right out. Infiltrator is no RPG. Despite sporting the Mass Effect tag, it has no RPG elements whatsoever. There are no character classes, customizable characters, dialogues, choices, consequences or even morality. The only few instances where you’ll actually be faced with making a choice is when you find random citizens, or in some cases, particular enemies and you decide whether to kill them or spare them. And your decision has, in no way, any impact on how your campaign pans out. The only things that actually bear any resemblance to their console counterparts are the character species, the weapons, the biotics and to some extent the environments.

Mass Effect Infiltrator tells the story of Randall Ezno, a Cerberus agent working for the shady organisation having no clue of their operations. But once he finds out their illegal activities and witnesses the murder of his only friend, he turns on them and decides to take Cerberus down. With the voice of an unknown Volus to guide him through his quest, Ezno sets out to discover their motives, all the while causing as much destruction as possible. The story is pretty straight forward, and the game makes no attempt to forge any kind of an attachment to any of the characters or the events being shown on the screen. Having a voiced protagonist doesn’t really help things either as Ezno turns out to be extremely unlikeable and one dimensional.

The gameplay is quite different from that seen in general iOS shooter games. The game uses swipe based movements for controlling the character. When not engaged in combat, Ezno can be maneuvered using the screen to rotate the camera and move him forward, like in any iOS game. It’s in combat where the game takes a path less trodden. As soon as enemies appear, Ezno automatically takes cover behind the nearest object. You can swap between covers by swiping in the direction of that cover. Enemies can be simply tapped to shoot. Doing so brings up a reticule which can be used to aim at their highlighted weak spots and cause more damage. Pressing anywhere else disengages you from the shooting, which is vital since weapons have an overheat-meter a la the first Mass Effect. This combat system rewards you with enhanced aiming as well as the ease of the tap-to-aim mechanic. There are plenty of biotics too, including certain instantly recognizable ones such as Pull. And there is an additional cloaking ability to get you through sticky situations.There are a wide range of weapons, biotics and armor suits available to choose from, most of which can be bought, and also upgraded, at the store using the in-game currency–which is awarded based on how well you fare in each of the checkpoints the entire game is divided into. The game grades you in terms of the time taken, style, and damage taken. Earning more stars gets you more cash. There are also intel pieces to be collected, dropped as loot by the fallen enemies. These intel can either be uploaded to your Origin account to boost your Galactic Readiness Rating in Mass Effect 3, or simply be traded for in game cash.

While it certainly sounds good, this system doesn’t work all that well in practice. Connecting to Origin while playing the game takes a lot of time. I even encountered a couple of hang-ups, forcing me to restart the game. Even when the intel is uploaded, it has no real tangible impact on ME3‘s campaign–in fact you would be better off trading it for cash. Coming to the gameplay, even though the combat works effectively, the movement is really tough to get a hang of. The swipes are overly sensitive, sometimes leading to unintentional moves that eventually get you killed. The camera movement tends to be sluggish occasionally. Also, close quarters combat is troublesome. Switching between weapons is done in real time, which poses a problem since enemies really close in on you in that time and this, more often than not, leads to some unwarranted deaths, particularly when facing Krogans. The dumb enemy AI is atrocious. Enemies will simply hide behind cover, popping up conveniently for you to land a headshot. Although these problems are somewhat tolerable, the boss fights make every effort to glorify them. The boss fights are absolutely excruciating, and despite having the right tools to take them down easily, you end up getting killed a lot before you are able to make it past these encounters. No doubt, fighting a gigantic mech in constricted spaces sounds fun and challenging, but the aforementioned camera and movement problems make it a trudge to play through.

Having to kill the fundamentally same, albeit visually different, enemies over and over gets tiresome quickly. Even though the stunning visual design does its part in making the journey from one level to another worthwhile, in the end repetitive level design drags it down. With the game possessing so many great ideas and all of them falling way short of greatness, the spectacular visuals thankfully manage to wow at every turn. While not as brilliant as, say, Infinity Blade, Infiltrator still goes on to secure a place right at the top with some of the best looking games the iOS devices have ever seen. The lighting effects and shadows as well as the detailed textural work on the characters and environments alike are all top notch.
There is almost no dialogue to speak of. Most of the action is peppered with some occasional, yet consistently lame dialogue, which mostly involve “I will kill you!”, or “Go there, do that”, all accompanied by a lot of grunts and shouts. The sound effects that follow gunshots or even kills are not impressive and this, to some extent, takes the away the fun out of blowing enemies to smithereens using rocket launchers.

Mass Effect Infiltrator clearly tries hard to be a true, worthy iOS member of the Mass Effect family. But despite tailing some heavy duty visuals and a lengthy campaign (around 5 hrs), Infiltrator fails in a lot of aspects. The unique gameplay schematics ultimately boil down to mere swipes and taps which are nowhere near as thrilling as the firefights in Mass Effect games, or in any general iOS shooter, for that matter. The buggy gameplay and the unimportant storyline hamper the non-stop barrage of bullets that you unleash throughout the game. And worse, a heavy $6.99 price tag is really hard to justify for a game that stumbles across so many fronts.