After proving her dominance over the seven worlds of the original Mugen Souls and saving her best friend Belleria from a terrible fate, the undisputed god Chou-Chou has set her sights on 12 new worlds. Does her latest scheme come to fruition, and can she keep her status as the undisputed god?

Even before I got my hands on the game, I was excited to play it because you would not be playing as Lady Chou-Chou, the annoying, little rug rat with moe-bending superpowers, but as Syrma and ultimate god who has to stop and ancient evil threat. Just the prospect of not having Chou-Chou anywhere near the adventure had me hooked. Unfortunately, as soon as the game starts, one of the first people you see is none other then the little brat herself.

Mugen Souls Z picks up right after the events of the first game: Chou-Chou has taken over the seven worlds and has amassed a small army of peons to use in her adventures. They soon find another galaxy that houses 12 different worlds, so Chou-Chou decides to place one of her peons on each world to see who can conquer their respective world first. On the first world that Chou-Chou visits, she meets Syrma, one aspect of this galaxy’s ultimate god which has been split into 12 entities for unknown reason. Syrma carries a coffin and must use it to absorb the other gods so she can become the Ultimate God again and stop an ancient evil  Upon their first meeting, Chou-Chou demands that Syrma become her peon and attempts to work her magic without any effect. During her expected temper tantrum, Chou-Chou sees the coffin and, despite Syrma’s warnings, opens and enters it. The coffin then closes, sucks out Chou-Chou’s powers, and shrinks her down to the size of an annoying fairy. So now Syrma must not only stop a vaguely evil threat, she must find a way to return Chou-Chou’s powers by absorbing the powers of the other ultimate gods.

The battle system is largely unchanged from Mugen Souls. Syrma takes the place of Chou-Chou, and she can use the peon changing power, now known as Captivate. Captivate is essentially the same as Moé Kill, except instead of randomly guessing to find the combination to enslave the peon, there is a handy little gauge that shows you exactly how much of the peon meter will fill (but you still have to find the right combination). Going hand in hand with Captivate is the Coffin Effect; after enlisting a new peon, your coffin can heal you, damage the enemy or buff your party. One major improvement was the reformation of the Linked Attack system: In the first game, if your attacking character and other characters were in range of each other, they performed an attack that was accompanied by a cutscene. Normally this isn’t a bad thing, but you couldn’t turn off the Linked Attack function, and the cutscene interrupted the flow of the battle, even if you skipped it. Now, the Linked Attack is more of a special skill where you have to unlock it by leveling up and have the right conditions met to use it. You are also given the option to switch party members in the middle of battle, which gives you a strategic advantage in certain battles since certain monsters and bosses are immune to different abilities or will actually be healed instead of damaged. 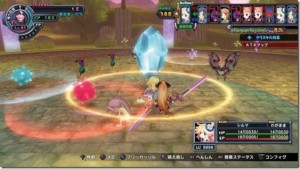 G-Castle battles are pretty much the same rock-paper-scissors format, as well, only now G-Castle has taken on the form of a Gundam instead of that weird rabbit amusement park. While this adds a new visual dynamic to the G-Castle battles, they are still scattered throughout the story and don’t fit in with the gameplay as much as it should. Because of this new form, G-Castle looks a bit different than before, with a smaller and rearranged shopping arcade in your base. Your basic item and clothing shops are still there, as well as the Peon Salon, where you create your own fighters, but since there is a wide cast of characters it seems like an unneeded luxury. There is also a store by the bath house area that allows you to trade different types of soaps and shampoos to receive stat bonuses in the field. The Mugen Field also makes a return and, other than a few stronger optional bosses, it remains unchanged except a few minor tweaks. It’s still an uphill climb to reach the last floor, but it’s still great for a quick level grind so you can get back to the story.

Story-wise the whole arc is just kind of bland, much like the first game. Although the final boss might be different, the whole concept is pretty much the same: Go to a world, meet a few characters, chase after the characters, fight the characters, throw one into a coffin to absorb powers, move on. The main story arc does like to trail off a little too much, which a couple characters seem to realize, and when they finally get back on track to the main plot, something else comes along and derails everything all over again. It’s like watching Naruto filler episodes, except without “Believe It!” being said every two sentences. When you finally find out about the ancient big bad and everything, you pretty much don’t care, and it doesn’t even feel like a final battle, mostly because you got sidetracked so often that it’s like there wasn’t a story to begin with. 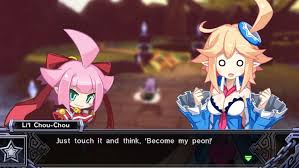 Despite having 12 worlds, the maps aren’t anything to amazing on their own. In the first game, you just traveled around the map fighting monsters, making things your peon and chasing down your targets all in an enclosed area. Unfortunately, this hasn’t changed much, except that every map has a secondary map which you have to unlock and access through G-Castle. The only difference with this secondary area is that it takes place underground, though it’s never really specified. Taking a page from Dragon Age 2, a lot of these underground dungeon places look exactly alike, with almost no distinguishing features besides the monsters that populate the area. The monotony is broken up in the overworld maps, though, with the worlds having their own landscapes which are visually distinct, but you won’t be gasping at wonderous vistas and intricate detail.

The graphics for Mugen Souls Z are cartoony, with characters on the map being rendered as chibis (smaller, cute versions of the character). Cut scenes are rendered mostly two-dimensionally, with character portraits just appearing on the screen and talking to each other. This isn’t necessarily a bad thing, but the dialogues are always too long and get longer when you gain more party members who all have to get a word in on each topic. What stands out the most is the blatant fan service. Every time they find one of the twelve ultimate gods they get thrown into the coffin, and their powers are absorbed by a sticky goo that oozes around them. Even if a male character is the target, somehow a girl gets trapped in there with them, and during the entire ordeal we are greeted with a picture of the girl character in a suggestive pose with the ooze sticking to them. 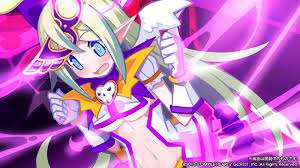 On the bright side, the voice acting used in the game is pretty funny and impressive. As a cartoony game, the voices of each character convey that perfectly. There are a plethora of characters portrayed and no one sounds the same. The one annoying aspect of the voices, though, are the battle cries. Each character pretty much has only three or four sentences that they utter when they begin a fight, when they attack, and when they win. Characters from the first game didn’t even get new lines. Ryuto, the pilot of G-Castle, for instance still screams “Watch me, Lady Chou-Chou!” every time his turn in battle pops up. Others have equally as annoying phrases, but thanks to the party swap ability, they can be spread out enough to not drive you completely insane. On the other end of spectrum, the music is unmemorable and boring. I wish I could remember the theme songs for different maps, but to even recall them I would have to find them on YouTube, and even then it’s not guaranteed. The theme song to the game itself is your standard cutesy-anime bubblegum pop, and while it’s a fun song, it’s not a great song.

Overall, Mugen Souls Z has enough to call itself a sequel. Unfortunately, it resembles its predecessor too much and is bogged down by unneeded mechanics, the Metal Gear Solid-esque cut scenes, and Chou-Chou. If you are one of those who likes weird, cartoony, niche games then this could be for you, but on the whole, there are plenty of other games out there you could play with this kind of quirkiness and have a relatively better time.