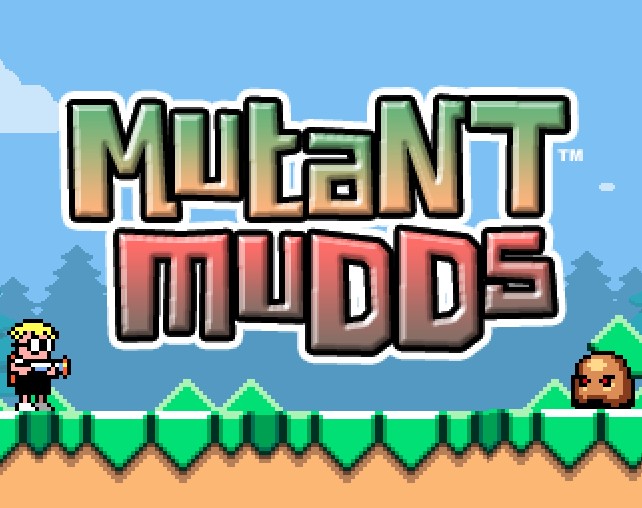 Having developed a slew of first-person shooters for the Nintendo DS, famed developer Renegade Kid are making their eShop debut with the release of Mutant Mudds. Originally designed as a third-person shooter, the game never found a publisher, and failed to gather enough support to see a release as a DSiWare title. Thankfully, it was remade as a simple 2D platformer, and it has finally seen a release. While some may think that describing Mutant Mudds as simple would sound condescending, it only serves to remind us of its, well, simplicity. This game doesn’t break barriers, redefine gaming, or innovate in any sense of the word. The only reason you need to play it is that it’s a damn good game.

While Mutant Mudds can easily be described as “retro”, it doesn’t only apply to its visuals, but to the package as a whole. Unlike other recent 2D indie platformers, it doesn’t simply look retro, it plays, sounds, and feels retro. The game follows a young boy named Max as he tries to save the world from the invading mud creatures, armed with nothing but a jet pack and a water cannon. As basic as its premise, the levels will have you doing the same thing: you enter a level, collect (up to) 100 diamonds, avoid pitfalls, blast baddies, and reach an end goal. It might sound repetitive, but similar to the NES Mario games, the level design is top-notch, and you won’t find yourself getting bored.

While the game certainly doesn’t change up the formula, it works because the platforming is as tight and satisfying as ever, and the game offers up a level of difficulty that hasn’t been seen since the 8-bit days. Mutant Mudds plays like your standard platformer/shooter, with shooting and jumping tied to two different buttons. However, pressing the jump button in mid air allows you to hover in the air for a few precious moments. It’s here where the platforming derives its difficulty, as most of the levels consist of jumps and obstacles that must be navigated with pixel-perfect precision. There are no unavoidable enemies or blind jumps. The game gives you all the tools needed to navigate each level, but it requires a high level of gaming skill on your part. If (and when) you die, it will be because of your recklessness. This is where the “retro” aspect truly shines. Mutant Mudds doesn’t rely on a flashy presentation or gameplay gimmicks, but delivers a solid outing with platforming in its purest form. 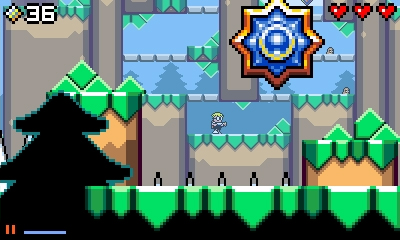 The one thing that Mutant Mudds handles differently is its level layout. While it is strictly 2D, by using special jump pads, Max can launch himself into or towards the screen. By spreading a level between the fore, middle, and backgrounds, the game is able to fit in more action without resorting to lengthy level scrolling. While this sort of layout might sound confusing, with the 3D turned on, you’ll easily be able to determine what plane an object resides in. The art style complements the 3D mode nicely; the mix of 8-bit and 16-bit is easy on the eyes. Unlike other titles on the 3DS, you won’t mind keeping the 3D on the whole way through.

While the game is a bit on the short side with only 20 levels, each of the main stages has a secret door that you usually cannot access without unlocking jet pack and water cannon upgrades, which is what the diamonds are used for. The secret levels are inspired by the green and red color schemes of the Game Boy and Virtual Boy respectively. While older gamers might cringe at the sound of Gunpei Yokoi’s failed project, it’s a fitting homage to a system that was monumental to the development of the Nintendo 3DS. The chiptune soundtrack also pulls you back to yesteryear, with a handful of catchy tunes that are only slightly hampered by their similarity. 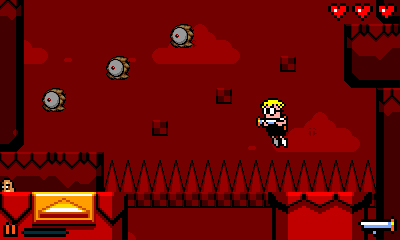 Regardless of its short adventure, Mutant Mudds is a game that truly deserves your attention. Not only does it offer up a slice of pure, unadulterated platforming, it stands out as one of the handful of titles that legitimizes Nintendo’s newest digital storefront.