Little Big Planet meets Super Mario.That’s the best way to describe Crescent Moon Games’ new 2D platformer Paper Monsters released on 26th January for iOS devices. Be it the level, art , or the lead character design, all are instantly reminiscent of Media Molecule’s blockbuster PS3 platformer. That is not, by any means, a complaint; if anything, Paper Monsters embraces it and utilises its unique artistic style to leave a lasting impression. By no means does it break new ground. It is a simple, straightforward platformer like we all have played in the past and loved. You play as a cardboard character who has to defeat the titular monsters who have invaded his land. The story is pretty much non-existent, but that just goes on to show the silly good fun this game offers.

The control scheme is easy to get a hold of. You control the character’s movement with a virtual left analog stick. Pressing the right side of the screen makes him jump. There are silver buttons to collect which increase your score, and golden buttons which can be used to purchase items of clothing for your character. 50 silver buttons award you one golden button at the end of the level. There are also hidden golden paper clips to collect which award you bonus points, and hidden adventure cards, each of which awards you with a gold button. There are plenty of enemies in each level, and you can jump on them to dispatch them and score additional points. Certain sections will have you play as a submarine and a helicopter, so that just mixes things up and goes a long way to make the overall game seem vibrant and fresh!

The most essential aspect of any good platformer is its controls. No amount of pretty graphics or sound design can save a game, much less a platformer, if it doesn’t win you with its gameplay. Fortunately, Paper Monsters delivers precise and responsive controls, with the option of using a virtual joystick or classic touchpad. Using both of them is a breeze, although personally I preferred the virtual joystick. 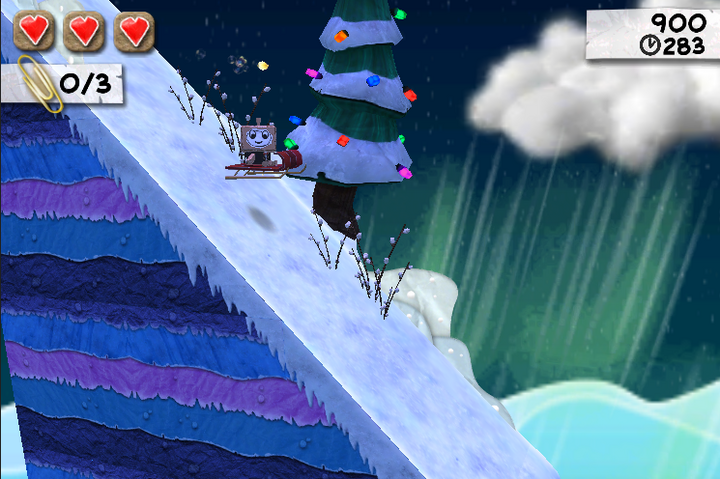 There are four chapters, totalling 16 levels, each of which should not take you more than eight to ten minutes, which makes it a pretty short game. This is one of the areas where Paper Monsters falters. Each chapter has its own uniquely themed graphics and a customised background score. The fourth level in each of the chapters has you face off against a boss, killing whom awards you a golden key to progress through the level. The boss fights don’t offer much of a challenge, but they are fun to play and imaginatively designed, offering hilarious ways to defeat the amusing and self-claimed ‘ginormous boss dudes’. The initial levels are pretty simple, but as you progress, they get tougher, and the game does a good job of preparing you for the next level. The collectibles are cleverly hidden, sometimes needing you to warp to different areas (a la Mario), and it will take you a few replays to get all of them with a perfect score.

The game has only one checkpoint in each level. But if you are aiming for a highscore, you will be better off restarting the whole level than from the checkpoint as doing the latter resets all the silver coins you collected to zero.

Presentation-wise, Paper Monsters never fails to amaze you. The game features 2D paper cut-out characters and environments presented in 3D, and the visuals are gorgeous. The game oozes charm throughout its campaign, with wonderfully designed levels. Imagine Sackboy made out of cardboard, and you have the hero for this game.  Making him wear wacky clothes, sunglasses and cowboy hats only makes him cuter! The soundtrack is something that really pulls you into the game. It superbly complements the game’s gorgeous graphics, but headphones are the only way to really enjoy the soundtrack. 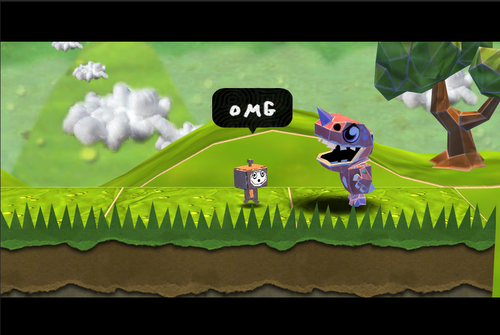 In addition to the 16 story mode levels, the game also offers a Dash Mode, in which the character runs to the right on his own and it only allows you to jump. You will need to time your jumps precisely to get far and collect the numerous coins and collectibles. It is a pretty cool feature, and is added as a bonus, although given the fact it is essentially a never-ending level, it could have been a game on its own. The game has an online leaderboard integrated with the Game Center, and has plenty of achievements as well.

At $0.99, Paper Monsters is a steal. Art design that impresses as well as it charms, a soothing and fitting background score, 16 challenge filled levels with an additional Dash mode, the myriad of collectibles that add replayability to the game, there is a lot up for grabs here. It is extremely easy to recommend and will more than just entertain you on a lazy Sunday afternoon!

Editor’s Note: This game was reviewed for the iPad, but a version is available for iPhone and iPod Touch