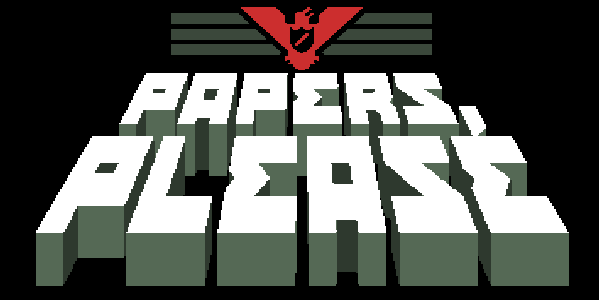 Papers, Please sounds like an extremely simplistic title, even by indie game standards, but only on paper. Playing as an immigration officer and a resident of the fictional Communist nation of Arstotzka, you are tasked with admitting or denying entry to people at the border of Arstotzka, which basically entails checking for the authenticity of the documents provided by them (preceded by you asking for “Papers, Please”, of course) and stamping their visas with the appropriate seal. However, it’s the ingenuous way in which Papers, Please builds upon this foundation that makes it an absolute gem of a title.

Despite being set in a single location for its entire duration, with no change of scenery whatsoever, Papers, Please hints at a much larger world brewing with conflict and much bigger powers at play, all of which ultimately affect how strict the checking process at the border gets. You begin with simply screening Arstotzkan nationals, asking for their passports, verifying the photographs in them and stamping them accordingly. But as the days progress, more and more foreign citizens will start seeking an entry into the country and that’ll entail looking at more documents, such as a permit for immigration, work permits for those who seek jobs in the country and so on. There will be plenty of unforeseen terrorist attacks taking place which force the Government to put stricter screening practices in place. All of these, in one way or another, make your job tougher, as it simply means verifying more documents. Letting slip a person with incomplete or forged documents will end in you getting a citation. Get three in a day’s work, and you start facing monetary penalties.

Such penalties prove really taxing, as money is what ultimately you work for. At the end of each day, the game screen will list out your earnings which depend on how many applicants you processed that day, leaving you to manage how you wish to spend it. The mandatory rent aside, you’ll have to decide if you want to spend the remaining money on food, heat or medicine for your family members. More often than not, the money you earn will not be enough to account for all three. This means going to sleep cold, sick, hungry or worse: some combination of the three.

In turn, this hardship forces you to make some tough choices on your job. You will be tempted to let people with forged documents in upon being offered even measly amounts of extra money. You might even illegally detain people upon striking a deal with the patrol officer who promises to pay you for doing so. All the while, you need to be wary of the citations and penalties that might be imposed owing to the wrongful detainment and admittance of people. This balanced system, which makes you choose between succumbing to the allure of extra cash or risk going to bed impoverished in fear of penalties, makes for some extremely tough decisions on the fly, most of which lie in the morally grey region.

Your decisions will also have dire ramifications down the line, which you’ll end up reading about on the front page of the next day’s newspaper. Let slip a Kolechian, and you might become the unwitting accomplice to a suicide bombing. Deny entry to a diplomat, and ties between Arstotzka and Kolechia become weaker. These consequences, however, are not just there for you to gain more insight into the political functioning of the country. They ultimately decide what route your game takes, since there are 20 different (but not necessarily different) endings in the game. Some may end in you being jailed owing to your debts, or having too many goof-up warnings and citations. In some instances, accepting large bribes will lead to an inquiry into your earnings which again may lead to your jailing. In the best of cases, however, you may be awarded a certificate of excellence for efficient immigration control along with cash rewards, leading to a ‘best ending’ of sorts.

These fleshed out and thoughtfully crafted gameplay elements are so beautifully tied in together that the entire experience ends up being absolutely memorable. The grim, often depressingly dark tale in which you find yourself to be nothing more than a powerless pawn is quite compelling at times. The story is by no means fulfilling, but it saves Papers, Please from being a mere ‘spot the difference’ game, and to some extent, helps alleviate its inherent repetitive nature. The game often incorporates much darker undertones of regional and racial profiling, including screening specific people for contraband or explosives regardless of whether or not they actually qualify for a strip search. It’s moments like these that elevate Papers, Please to a thought-provoking title and take it closer to its self-proclaimed description of a “dystopian document thriller”.

After playing for roughly 6 hours, unlocking 16 of the 20 different endings in story mode and trying out its Endless mode (which is not as fun, since it ends up being a score-chasing affair), it is safe to say that Papers, Please deserves to be played. It offers one of the most unique, innovative gameplay experiences, having a dark storyline replete with difficult and morally ambiguous choices at its very core. Sporting a pixelated art style and a primarily dark, washed-out color palette which rightly complements its overall theme, Papers, Please comes out a winner in the presentation department as well. It is accompanied with a somber, brooding soundtrack that elevates the moment-to-moment tension of the gameplay.

With all being said, Papers, Please, while not necessarily ‘fun’ in the traditional sense, is one of my favorite games of the year so far and it definitely deserves a place in your library, if you call yourself a lover of indie games or just meaningful experiences in general.