Pushmo, from developer Intelligent Systems, is an addicting little puzzler that is definitely worth downloading from the 3DS eShop. While it isn’t quite perfect, it is a great game that does a lot of things right. Intelligent Systems is known for its work on WarioWare: D.I.Y. and the Fire Emblem series, but Pushmo is the company’s first puzzle title on the 3DS. If you haven’t heard of Pushmo yet, take a look at the trailer below.

At first, there are eleven levels with eighteen Pushmo each, for a total of 198 initial puzzles to solve. Each puzzle has a difficulty rating from one to five stars, where single-star puzzles are the simplest and five-star puzzles are the toughest. There are two tutorials to teach the player different puzzle-solving techniques as well as how to use various gadgets that show up in the later puzzles. Along with the lesson levels, there are five challenge levels that test the player’s mastery of the skills learned. Finally, the toughest puzzles are found in four sets of mural levels. Once you’ve beaten the first 198 puzzles, there are three sets of bonus murals that are three-stars or higher in difficulty. There are over 250 puzzles total. 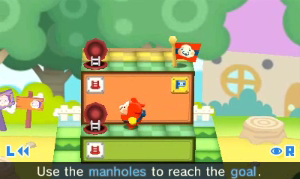 At the beginning, the puzzles contain only blocks. Starting with the second lesson level, gadgets are unlocked, adding a new degree of complexity. The first gadget is a pullout switch that automatically pulls any block of the same color out all the way. The second gadget is the manhole, which acts as a portal from one block to another.

Overall, the controls are well done, but there are a couple of tiny quirks. First, certain levels are made more difficult by requiring the player to make odd jumps that it isn’t always obvious your character can handle. Also, the little hero can be a bit floaty at times, causing him to land somewhere you don’t want him to be. Thankfully, the left shoulder button allows you to rewind the clock and return to any previous position. If a quick rewind won’t fix things, there is also a reset button that you can place Mallo on to restart the puzzle completely.

In addition to having good gameplay, Pushmo is colorful and fun to look at, making great use of the platform’s 3D technology. Each block is color-coded to indicate how far it has been pulled out, and blocks cast shadows so you know when one is overhead. As you pull a block toward you, it also seems to pop out of the screen. This is helpful for gauging the block’s depth. The 3D graphics are also useful for keeping track of where Mallo can reach when a block is not directly in line with him.

Like many eShop titles, Pushmo doesn’t really have a story. The game provides a premise for you to run around solving puzzles, but that’s about it. Pushmo are childrens’ climbing walls built by a character called Papa Blox. Someone has been resetting the Pushmo while children were playing on them, and the kids have been trapped inside. The old Pushmo maker has a bad back, however, so he needs Mallo’s help to save them. The player must control Mallo to shift Pushmo blocks and free the trapped children. 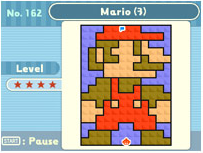 The aforementioned murals are Pushmo’s place to show off its color palette and potential for creative flair. Each uses the pixel-like Pushmo blocks to make an impressive picture of anything from a curry dinner to dinosaurs to retro Nintendo characters. Pushmo’s music, though pleasant to have in the background, isn’t particularly memorable. Each type of level has its own track, as do the menu screen and the level editor, but they all kind of blend together.

Hopefully, the possibilities presented in the murals will inspire you to try out the level editor and create your own puzzles. The interface is simple: just pick a color and draw your blocks. Once you’ve unlocked gadgets, you can also use them to make a more complicated Pushmo. Once you’ve made a puzzle and solved it, the game generates a QR code that you can share with your friends. (Nintendo’s website actually has a few QR codes you can scan to download puzzles created by the developer. You can find them here.) Though player generated puzzles are nifty, it is annoying that there is nowhere for us to download new levels. I could see Pushmo having a level portal where players can upload content they’ve created and access levels made by others. If this isn’t reasonable, it would even be nice to send friends puzzles in the same way you can send messages in Swapnote. It doesn’t really make sense that the only way you can acquire new levels from others is with a QR code.

Pushmo is a pretty simple game, but it is also a fun one. It has great puzzle mechanics, makes admirable use of the 3DS technology, and allows you to generate your own content to share with other players. All of these things come together to make Pushmo excellent, and you should give it a try.