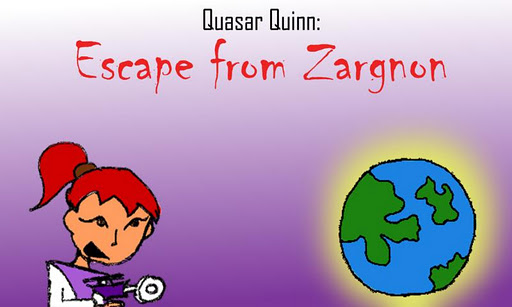 Quasar Quinn: Escape from Zargnon is not a typical game.  Not because of some technical marvels, but because of who made it.  Quasar Quinn was developed by Neil Schmitzer-Torbert, Associate Professor of Psychology at Wabash College.  The game is designed not just to be enjoyable but to to study how humans learn.  If you allow it, the game will send usage data back to Dr. Torbert who will use that data to help his research.  All proceeds for the game go to fund further research.

The story begins with a crash landing.  Our heroine Quinn escapes the wreck with the ship’s wise-cracking AI computer.  She immediately begins looking for a good mechanic, which she just so happens to find nearby.  However, by the time she returns to her ship, she finds it missing.  The local aliens tell her that some thugs came by and stripped it for parts.  Quinn then sets out to retrieve the parts of her ship so she can go home.  As stories go, it’s not very complex, but there is a bit of humor injected that the nerds will love; especially the explanation of how teleporters really work.

The game uses a basic experience points leveling system.  Skill points are earned at each level up and new skills are earned at certain levels.  The skill points are then used to upgrade said skills with a max of 5 upgrades for each.  These skills include a Jetpack for slowing your descent after a jump, an auto dodge ability, and a laser gun.

Being an Android game, all controls are done on the touch screen.  A virtual thumb stick is set in the bottom left, and three buttons on the right.  One for jumping, one for swinging a beam leftover from your ship, and one for your special attacks. Special attacks are changed by tapping the text above the buttons which will cycle through the available attacks. 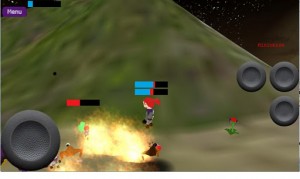 Without a physical thumb stick I found myself moving my thumb too far right at inopportune times.  Same issue with hitting the buttons. If I was surrounded by enemies I would find myself cycling attacks instead of using my melee or special attack.  Years of playing with a  real controller have caused me to rely on tactile cues to determine my movements.  If you are not used to playing touchscreen games you will likely find yourself in the same situation, but once you hone your movements the game responds fairly well.  At times, there can be a delay if there are too many enemies on screen, though.

Each level consists of a fairly linear path that is separated into segments of enemies and recharging flowers.  Yes, flowers.  Hitting yellow ones gives you energy for your weapons, while red flowers give you health.  The enemies vary from snake-like creatures to projectile-shooting flowers to one-eyed floating purple aliens. There are also friendly aliens along the path who won’t attack you on sight.   They offer no help to you in your quest, but they will become one of the strongest enemies if you hit them.  The first one you hit will scream for help, causing the others to use flame attacks.

Combat starts off quite simple; take your melee weapon and hit things with it.  You will be using this attack throughout the game as you will inevitably run low on energy for your special attacks.  Once you do have some special attacks to pick from, then combat can become quite funny.  One of the special attacks is called the “Minionizer”.  It turns the enemies into “mini-me” versions of Quinn that attack all nearby hostiles.  If there are no hostiles nearby then they will run ahead until they find some.   My favorite weapon was the missile as it auto-tracks and hits multiple times.

There were a few bugs that, while they don’t break the game, make things difficult at times.  Sometimes there were delayed hits from the enemies. I would see an enemy die, and a second or two later I would take damage.  There were some clipping issues, as well.  The projectiles from the enemies and my own missiles would travel through hills to hit their targets on the other side.  While that was great when it worked in my favor, it was annoying when it didn’t.  While I did figure out a strategy to work around this, there is still some work to be done.

Speaking of things that could use some work,  the camera view moves automatically and the total viewing area is set very close.  Most of the time this was not an issue, but there were stretches where the inability to see very far ahead caused me to walk and jump into lava.

The graphics were quite varied in their details.  The story boards are hand drawn by someone with very basic drawing talent (see the title screen).  The game field, Quinn and the aliens were custom designs.  As Dr.  Torberts skills are not in 3D modeling, those models were also of a basic design.  This contrasts with the night sky that acts as the background, which is a very high resolution image.  I would guess that they used a NASA photo, based on how detailed the picture is.

The one background music track (yes, just one track) is a light techno beat. Its styling is reminiscent of what movies have told us music will be like in the future, so it fits the scenery.  Because there is only one music track, it repeats throughout the entire game.  It does get old pretty quickly, and I did turn the sound off throughout most of my playthrough. Any sequels made should add a few more tracks to keep things fresh.

There are definitely some areas that need some improvement.  As a game, in and of itself, it doesn’t stand out.  If you’re looking for something as polished as Angry Birds, you wont get that here.  But if you want to help out with some scientific research, then $1 and a couple hours of your time is a small investment.