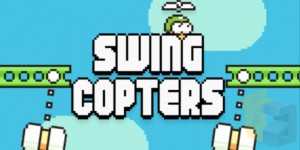 Dong Nguyen is back at it again with another frustratingly tough mobile game: Swing Copters, the latest one-tap-gameplay app and successor to his previous title, Flappy Bird. The Vietnam-based Dong and publishers Gears Studio just unveiled their new sanity-sucking effort in a bid to get you to throw your mobile phone against the nearest wall. I decided to take a chance, being the gaming daredevil that I am, and give the game the pleasure of being installed–which may have been a very big mistake.

Released on the Google Play Store and Apple App Store, the game is free–which is great–but bombards Android users with unremovable ads (you can pay $0.99 to have them removed on iOS). They are a bit of an annoyance, as you will find yourself once again, dedicating a lot of time constantly replaying the game to get a better high score because… Let’s just say the difficulty level in Swing Copters far exceeds that of Flappy Bird, and once you get playing it’s clear to see why. 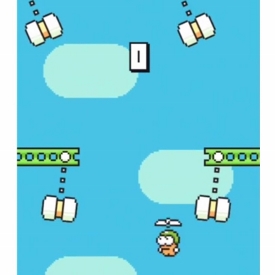 Like Flappy Bird, the aim of the game is to maneuver a small creature, but there is a twist–there are hammers swinging on either side of each opening. By tapping on the screen, you are able to swing the copter left and right in order to line up and pass through the swinging obstacles.

The tap mechanism is incredibly sensitive, and, as your goal is supposed to go straight up, furiously tapping the screen, in theory should work. But alas! The obstacles are pretty much impossible to get through, and that’s where the problem lies: It’s actually too hard to get anywhere with this game. Unlike Flappy Bird, which allowed you to get slightly better after a few (hundred) hours, with Swing Copters, the unforgiving swinging hammers don’t allow you to ascend anywhere near the top of the screen, and you’ll be lucky if you make it off the ground and through the first hammer whilst you seethe inside at the way the game is mercilessly created.

As you can see the graphics are simple, and the audio isn’t anything special either. In term of soundtrack, or the lack of one, I guess you could enjoy the sound of your propelling copter for all of a second, since you wont go very far, and then the sound of you hitting the wall with a thud. That’s all the ambiance there is to enjoy, so don’t expect any heartfelt drums, or rhythmic synths.

Hey, it’s worth a try or 10, but you may lose your head in the process, and possibly your Android or iOS device. Because it may just have been destroyed. By you.