One recurring trend among indie games is the ability to play with music you already own. This sub-genre of music and rhythm games has already seen entries such as the critically acclaimed AudioSurf and Beat Hazard. Symphony is more like the latter than the former, as it is an action shooter with levels and enemies determined by the pulses of your music, but it still manages to play completely different.

The game, which runs at almost 200 frames per second(!), has a rather barebones art style. Lights flash in different colours and the screen pulses to the beat of your music, but there aren’t any complicated lighting or graphical effects that slow down your machine. The simplicity benefits the game twofold; not only can the game run faster and devote more memory to keeping the experience as smooth as possible, but it also means that the player is not majorly distracted throughout gameplay. I normally am turned off when a game doesn’t provide much to look at, but when the art design matches the game so well and actively avoids interference, I am 100% for it.

The story revolves around freeing your music from evil spirits. You might expect that a story in this type of game plays a very minor role; you would be wrong. Sometimes, when you’re randomly playing a song, it will shift into a boss battle. Your score won’t be uploaded to the game’s leaderboards (which include friend and worldwide), and your goal will simply be to defeat the boss. Boss battles and regular songs don’t punish you very much for death, in that they let you continue. However, deaths remove a huge chunk of your score, so it might be best to restart anyway.

The game has as much replay value as songs in your library. Unlike games like Beat Hazard that change your power as the song changes, Symphony just seems to change enemy designs and patterns based on your songs, which is very nice. It provides constant change and the thrill of always seeing something new without ever becoming unfair or unpredictable. As you continue to get hit, pieces of your ship break off (thus providing you with less weapons and becoming harder). When your ship destroys completely, you lose points and are removed from gameplay for a few seconds, which is slightly irritating at first, but makes a lot of sense upon further consideration — it gives you exactly enough buffer time so that when you get back in, you’re more likely to be safe and successful. 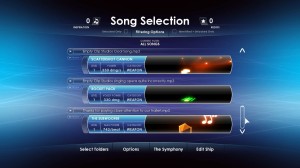 You can repair your ship with Eighth Note pickups that any and all enemies drop when defeated. These repair your ship, but collecting them is always a risk/reward system: do you risk going out of your way to increase your score and repair your ship when it means not having the opportunity to shoot the enemies? Or do you risk going without the repair, dealing less damage but staying safer? Coupled with the fact that journeying up the screen seems to exponentially increase your susceptibility to getting hit, and you have one of the deepest and most easily-understood systems in recent memory. The fact that the system goes completely unmentioned, allowing players to choose their own gameplay style, is even more flooring. You might be thinking that this is very similar to many other shmups, and in theory you’d be right, but Empty Clip Studios manages to pull it off with the most stunning grace I’ve seen in a game to date. Other pickups include power-ups and bombs that can destroy nearby enemies.

The game’s difficulty is also determined by how you set it. You begin with the quietest two dynamic markings in music – Pianissimo and Piano — and gradually unlock more, until Fortissimo. If you can beat any song over 90 seconds long on Fortissimo, you are absolutely flipping insane. By completing songs you can upgrade your ship’s weapons, granting you even more customization and making it easier to handle the higher difficulties, which by all accounts are truly brutal monsters in their own rights. 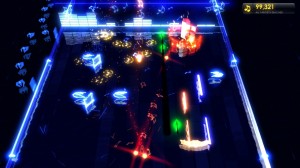 The game does have a few niggles here and there though. For all the insistence on the game’s story, it’s told a bit too passively for my liking, though your mileage may vary. I’m fairly certain that it exists simply to tie it all together as a cohesive whole, but with the game’s theme being “Liberate Your Music,” it could do with an extra story bit or two. Secondly, I couldn’t find a way to turn off the sound effects playing over the music, which sometimes overshadowed the music completely. It’s not really a big deal, as I can listen to my music sans-game any time and the sound effects really help pull you into the game, but it’s a problem nevertheless.

Bearing these things in mind, the game isn’t perfect. No game is. But I’ll be darned if you can find me a more addicting and enjoyable indie rhythm game experience for PC. Every single one I’ve tried has paled in comparison to Symphony. A symphony is an elaborate musical composition for a full orchestra, with every part working together to better the cohesive whole. In that regard, Symphony has the perfect title.

Oh — and how addicting is it exactly? I got the review copy 3 days ago. Within 72 hours I’ve clocked in almost 23 hours of gameplay.

Edit: The wonderful PR rep behind the game let me know that it’s possible to adjust the balance between the sound effects and music by pausing and changing something in the Audio Options menu, which I couldn’t find before. Adding +1 to the Audio Score.