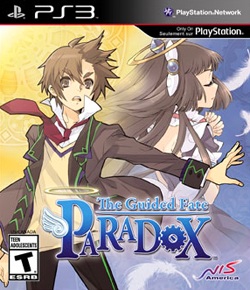 Strategy JRPGs have always been a bit of a niche genre, as they tend to be a much more dense experience and require more time than some want to dedicate. For those who can look the complicated mechanics and bizarre stories, however, these games can be very rewarding and deep experiences. In this genre, NIS America is, without a doubt, one the best in the business, and over the years they have built up quite a loyal fanbase. After a very busy 2013, NISA’s final offering for the year is The Guided Fate Paradox, which was developed with many of the members of team behind the Disgaea franchise and introduces a bit of rogue-like randomness to the mix. The end result, while not perfect, is a very solid title that any fan of this niche should check out. 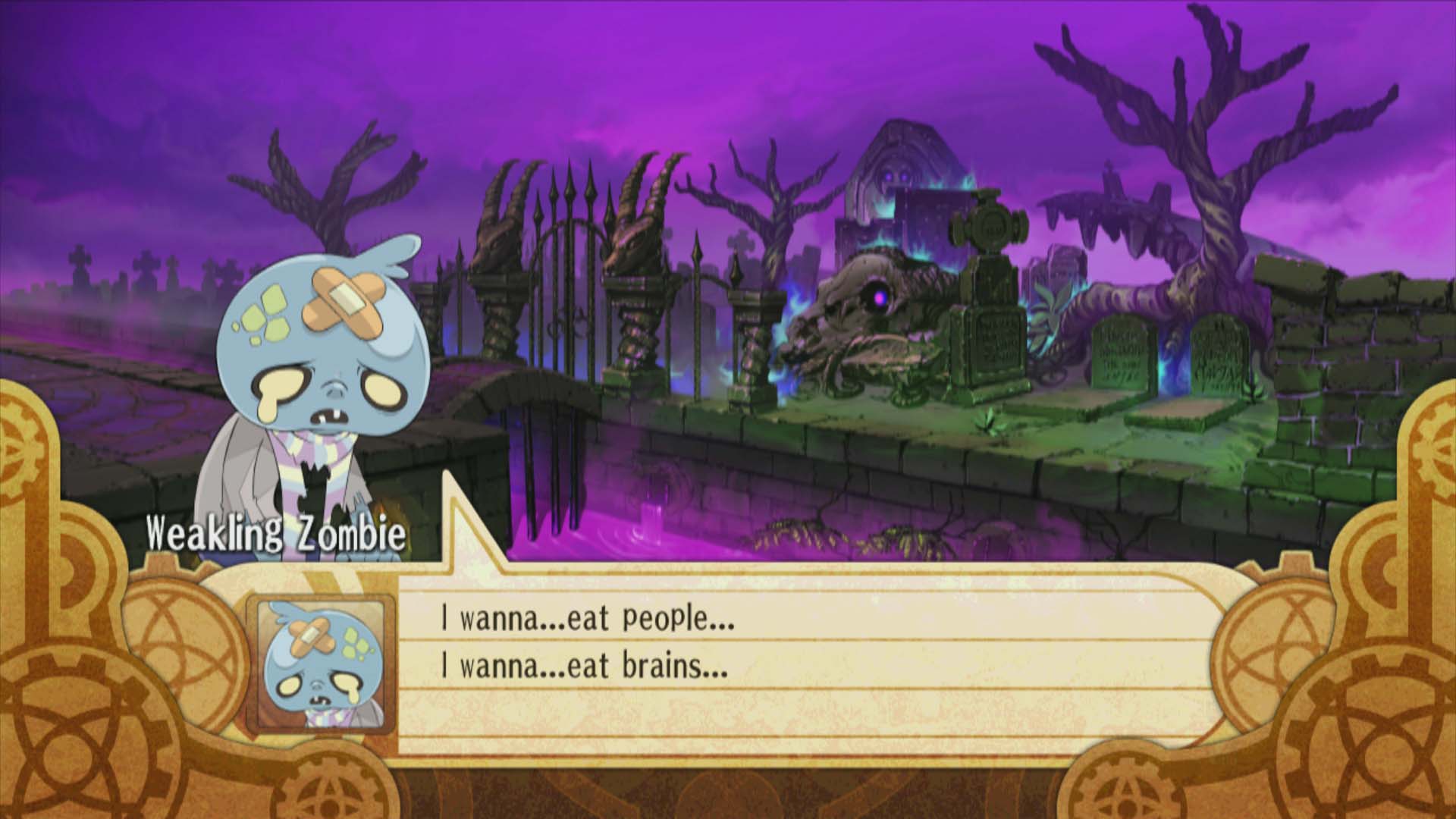 The story for The Guided Fate Paradox is just as bizarre as its pedigree would suggest. Our hero, the high school student Renya, is chosen to be God by a lottery machine at the mall. As God, he is tasked with entering the strangely high-tech Fate Revolution Circuit in order to answer prayers of believers, which, in this game, is done by exploring labyrinths and punching monsters in the face. Without a doubt, it is an unusual premise, and one that leads to some very strange situations. For example, the first wish the player takes on is helping a jaded Cinderella, who’s tired of just meekly following along with her fairy tale story. Supporting you on your divine quest is a group of angels consisting of a checklist of clichéd anime characters: the energetic tomboy, the voluptuous, innuendo laden she-demon, or the composed butler-type who obviously has a tragic past. While each of the supporting angels each get a bit of the spotlight as the game goes on, none of them ever feel particularly fleshed out, which is a bit disappointing. That being said, the constantly changing missions help the story stay interesting, especially as things get a bit darker and philosophical toward the latter half.

There are two distinct art styles in The Guided Fate Paradox. The first is the character portraits that are used during certain cutscenes. The artwork in these is very clean and colorful, and characters actually have short animations during dialogue, which is greatly appreciated during longer scenes. The second style, the sprite artwork, makes up a majority of the game. Each of the character models are very crisp and detailed, making it easy to distinguish between characters, even in crowded areas. Probably the standout feature, however, is the enormous amount of equipment available, each piece of which is modeled on your characters. Whether you want to see Renya dual-wielding broadswords, sporting a jaunty pirate hat, or rolling around with tank treads for legs, this game has got you covered. Collecting a full set is unlikely, so players are encouraged to mix and match pieces, which can lead to some very odd and hilarious combinations. One particularly memorable situation for me involved both Renya and his partner walking around wearing enormous fish heads. Along with its own look, each piece of equipment also has its own special ability or attack, and the animations that accompany these are full of amusing and fun little moments. 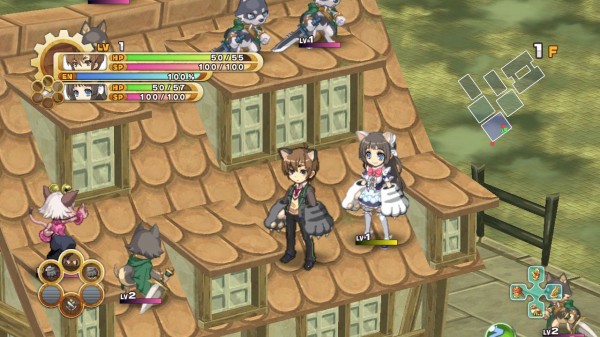 You’ll be seeing all of those animations quite a lot, because at its core, The Guide Fate Paradox is a dungeon crawler, with all the trappings that one would expect from that genre. Each chapter in the game is made up of ten randomly generated levels, and have their own theme and special gimmicks. While some are more straightforward, asking players to simply find their way to each level exit, other levels will have players outrunning a scrolling map, hopping across rooftops, or flipping switches to raise or lower water levels. This variety helps set each chapter apart and keep the player interested, something that I always thought the first few Disgaea games struggled with. That being said, the game never offers much explanation for each new mechanic, and there were times when I felt the game was punishing me for not implicitly understanding what I was supposed to do. Underscoring this issue is the stamina bar, which slowly decreases over time, forcing players to choose between thoroughly searching a level or rushing an area. While I can appreciate how that led to some very tense moments, there were multiple times when I simply found it frustrating. This problem is made all the more serious by the amount of randomness that is involved in the game. If a player dies, they lose not only their current equipment, but their entire inventory. Since most of the game’s weapons, armor, and items are found randomly, a single mistake can set you back hours. I had to make certain I always had an escape item handy, and even so, I was taken back to square one multiple times. Similarly, the fact that players are reduced to level one at the start of a stage led to me getting overwhelmed by the randomly placed enemies on several occasions.

That being said, The Guided Fate Paradox gives dedicated players plenty of chances to even the odds. Upon death or completion of a stage, Renya’s accumulated levels will be added to an ongoing total, which increase his overall base stats; that way, even death will slowly help players become more powerful. In addition, after equipment wears out and becomes “Burst”, it can be upgraded by a blacksmith, greatly increasing the stat boosts it provides. Depending on the item’s rarity, this can be done a number of times, leading to some ridiculously powerful weapons and armor. Bursting equipment also gives players Holy Icons, which can be planted in a checkerboard-like Divinigram to further boost the stats of Renya and his companions. Players will also unlock several training dungeons, the first of which has 50 levels. Most of the game’s particularly rare equipment can only be found in these dungeons, so after being wiped out, my first step was usually to go restock in these levels. With all of these options, players who find themselves stuck can easily change their strategies or loadouts. As with any rogue-like, proper preparation is the key, and taking the time to plan ahead and think things through always pays off when facing off against the various challenges the game throws at you. 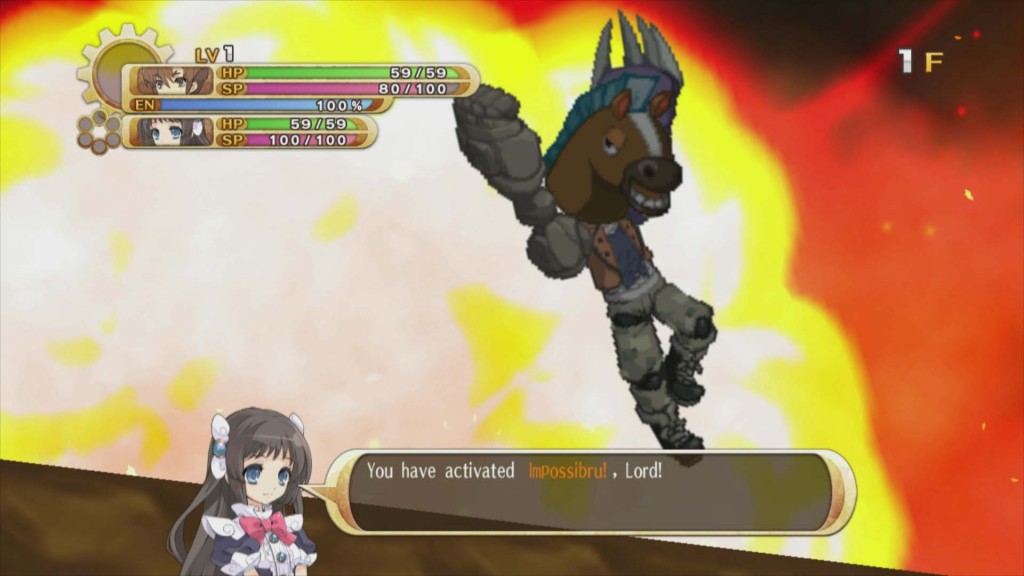 On the presentation side, the audio for the game is very solid. The music consists mainly of orchestral pieces that usually complemented the action at hand. A few songs, like the main staging area theme, were a bit too monotonous after a while, but it was a relatively minor issue. A nice feature was the ability to assign multiple songs to certain areas, which  removed a great deal of that annoyance. The highlight of the soundtrack are the vocal themes, which add character to some of the more exciting moments. The vocals themselves, though, are a bit of a mixed bag. The main cast, for the most part, is fairly competent; there were a few bizarre or awkward  lines, but I’m not sure if that’s more the result of the script than the actor’s skill. However, the minor characters range from passable to downright irritating. For purists, The Guided Fate Paradox includes the Japanese language track, which can be switched to at any given time. That being said, I never got to the point where I felt I need to turn off the English dub, so take that as you will.

Altogether, The Guided Fate Paradox is a fun little game, and caters to its niche perfectly; any fan of the game’s spiritual predecessor Z.H.P. Unlosing Ranger VS Darkdeath Evilman, or any of Nippon Ichi’s other titles will find plenty to enjoy. The story, while not the most gripping tale I’ve ever seen, is full of unusual moments and situations that I found to be quite entertaining. The presentation is about what you would expect from its pedigree, with grid shaped levels, over-the-top attacks, and a catchy soundtrack. The game provides a fair amount of challenge, but is properly balanced, so that players never feel too frustrated. While this game probably won’t convert any new fans to the genre, those looking for a new strategy fix should take a look.