Splashy and surreal, They Bleed Pixels is a gory platformer made by Spooky Squid Games, but does it deliver the difficulty curve that players ask for?

They Bleed Pixels has an obvious and basic good-versus-evil backstory, but it doesn’t hold water. Our hero is granted the ability to slaughter millions in her dream and collects pages of a mysterious bleeding book to fight the villain, but there really isn’t anything else beyond that. More specifically, the story involves the protagonist attending school at the Lafcadio Academy for Troubled Young Ladies. She finds a book in the library that bleeds and after reading it, has violent dreams that end in her waking up with creepy claw-hands. As the dreams get more violent and the mutation more persistent, she attempts to rid herself of the book, oblivious of a malicious entity who may be involved with her condition. Thankfully, the game offers enough of a difficulty curve for details such as plot and backstory to be pushed aside. The game was made to be difficult, and that is, in fact, one of its charm points. Both new and old gamers will have a hard time with this game, but they will adjust quickly to whatever it throws at them. The game’s controls are a bit nit-picky, which can leave a player stuck in the same place for a long time, but if a keyboard is not the player’s preferred controller, They Bleed Pixels has gamepad support and can be played on Steam’s Big Picture Mode. 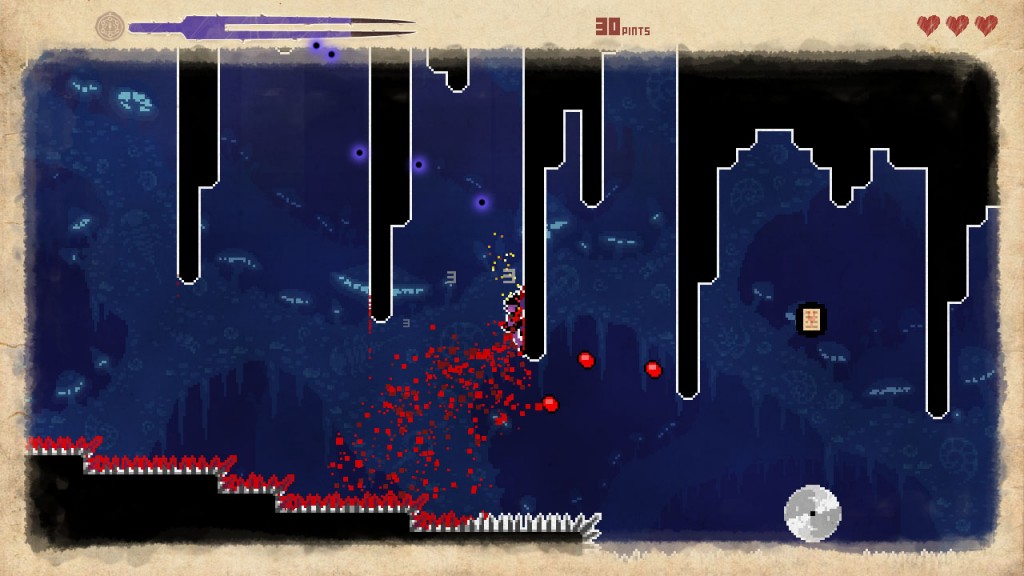 As I mentioned earlier, the gameplay is very delicate, which is necessary to create a challenging game that tests the player’s skill and balance. Despite this, there are some parts that are just finicky. The character should not have to be standing in exactly one area to flip a switch, perform a certain maneuver, or get other mechanics to work. The game makes up for it by giving your character all sorts of neat tricks that help out when the game starts getting hard, even providing a tutorial section that helps the player learn basic moves. The majority of the first playthrough will probably be spent learning and experimenting with these new abilities, ranging from the ducks and slides to stabbing enemies in the air and the Exploding Fist Technique.  The character has an unlimited lifespan, the ability to make a checkpoint nearly anywhere in the game, and a wide range of abilities that are good in a pinch. This should make it easier for some players, but they should expect to repeat certain parts until they get it right. Certain parts of the game practically turn the platformer into a puzzle due to their difficulty (I got stuck on one part simply because I was using the wrong kick), but it’s certainly fun.

TBP‘s entire style is dedicated to the Nintendo Hard era, from the intense difficulty even down to the designs. The pixelated style is filled with details that matter, ranging from glowing sigils in the background to the death animation of the enemies, blood flying and all. However, great detail doesn’t cover the entire game. There are some parts where the game slows down and delays the attack response time, which at the best is obnoxious to work with and at the worst means that players have to wait for the lag to pass or attempt repeating the same section over and over again.

Despite the difficulty curve that everyone vents over, is this game fun? The more difficult parts are just different game mechanics turned on their head and presented to the player in a way that makes them think about how to get over the obstacle. Not even a newer player will be stuck on one area of a level for long. The selling point of the game, however, is the gore. While the game is difficult, nothing is more cathartic than slaughtering the enemies that it provides you with and even being rewarded for doing it artfully. The points system is measured in ‘pints,’ and the game complements the player’s style with ‘Rugose’ and ‘Eldritch’. If the player is unable to find the joy in that, they will not enjoy this game. On the other hand, the game feels like the developers put everything into the difficulty curve and then left everything else out. The curve is great and it’s a fair challenge, but players looking for a bit more than extreme difficulty will feel left out.

The game’s sound, while unvaried, does its job. There’s no voice acting other than the player character screaming when she dies, but it provides enough context. DJ Finish Him composed a catchy, rather than impactful, soundtrack that is enjoyable to listen to while battling through the same level repeatedly. It has a daring electric/dance type of sound that doesn’t threaten to overshadow the game, but it also never really gets exciting. The soundtrack comes separately from the game for $5.00, so players can enjoy it outside of the game. 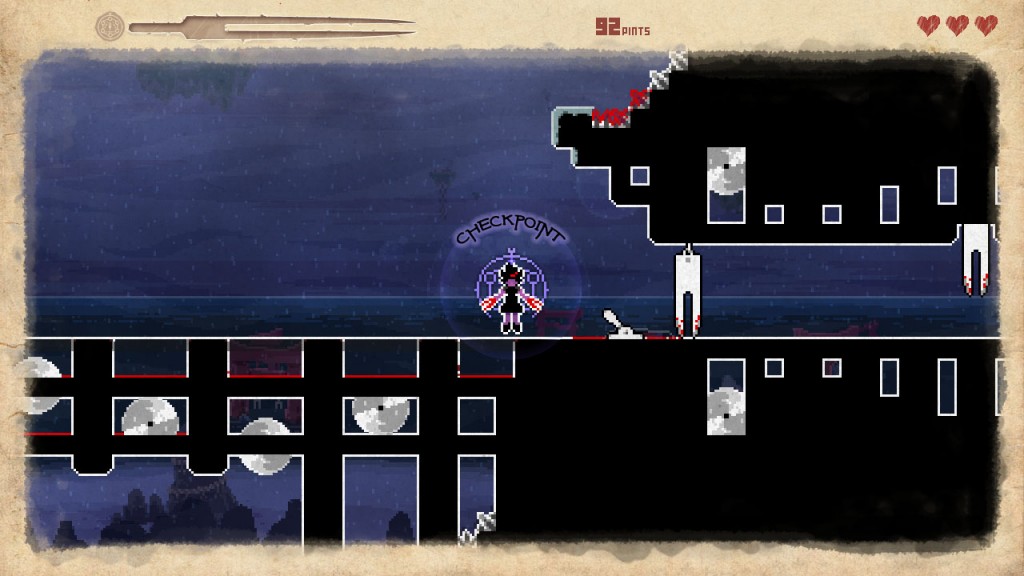 They Bleed Pixels is a horror platformer in more ways than one: there’s the terror of a small girl being morphed into a monster, slicing through multiple enemies while their bits and pieces fly about, and there’s the fact that the game is insanely hard. Anyone looking for a challenge will find plenty of joy in this game. However, do expect to play through certain parts over…and over…and over. The game does have an option to ‘create’ a checkpoint when you kill enough enemies, however, it cannot be ensured that the player will have killed enough enemies to cast a checkpoint when they really need one.  There’s only minimal story to this game, which is an utter shame. We get an idea that a greater force is manipulating our player character and granting her these odd powers, but other than that, it’s the typical slash and stab. The soundtrack is nice, but doesn’t show variety, which means that players will find themselves listening to the same chiptune over and over as they die over and over. Thankfully, the game has a huge replay value in the form of hundreds of achievements and bonus levels made by other developers: Seraphs Bleed Stars by Alex Bethke of Golden Gear Games, which translates the gory platformer into a dreamy, happy metaphor and They Bleed Ponycorns by Ryan Craighton of Untold Entertainment, which must be played to be believed. The music in the game is entertaining and fun, which keeps the more difficult levels from getting boring. All in all, the game is a virtual toybox filled to the brim with difficult platformer goodness, but it feels like everything else was forgotten in the process.