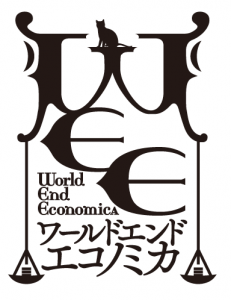 Anyone who has heard me talk about anime at any length has probably heard me rave about Spice and Wolf, one of my favorite series of all time. When I heard that Isuna Hasekura, the creator of that series, made a visual novel that involves economics on the Moon, I was elated. A three-part story about a young boy’s quest to become unfathomably rich fits right in with his other work, and the chance to control it made it all the more enticing; however, while World End Economica is a visual novel, it is more specifically a kinetic novel–a visual novel devoid of any choices or gameplay, effectively a digital comic (which is why you won’t see gameplay and balance scores below). That means the entirety of this “game” is progressed through pictures and text boxes, and it must be carried by the strength of the plot and characters.

Unfortunately, during the opening act of this story, the main characters doesn’t do this game any favors. You follow the story of Kawaura Yoshiharu, a teenage runaway dubbed “Hal” by one of the other characters. Hal displays virtually no redeeming qualities early on: He’s crude, chauvinistic, and greedy to a fault. Perhaps some of this could be attributed to him fending for himself on the streets, but that only goes so far. He happens to cross paths with a young woman named Lisa who lives at an abandoned church, and she takes him in. The church has one other resident–a young girl nicknamed Hagana, who also has a lack of redeeming personal qualities, explained in part by her own torrid past. As the story concentrates mostly on this trio, the result is Lisa playing a combination of parent, referee and mediator for the two runaways.

Fortunately, Hal and Hagana both grow significantly over the course of episode one, otherwise the 8-10 hours that this story takes to tell would be pretty unbearable. Even the couple of hours of them both acting like jerks at the beginning was almost too much, which brings up one of the big issues with the storytelling in World End Economica–pacing. The story just moves too slow at times, and, as the title would suggest, it dwells heavily on subjects of economics. There are long expositions on how the stock market works and how various trades and positions result in gains and losses, which might leave some players wondering when they can get back to the characters. These aspects of the market become part of the core story, though, as Hal tries to make money being a day trader on the Lunar Exchange. Despite his lack of formal education, he has a natural talent for it, but the volatility of the market makes for uncertain outcomes, the likes of which are mirrored in the plot itself.

Interspersed with the talk of money and character backstory, World End Economica drops snippets of information about life on the moon, though in many respects, the story could have played out on a futuristic Earth (or other planet) as well. The moon was colonized only recently, and Hal is among the first to have been born there. As a result, he does suffer the occasional insult about being “moon scum,” but even Hal doesn’t seem to dwell too long on them. There is nothing special about the cities, other than their futuristic nature–though it’s somewhat impressive what seems to have built up in less than two decades. This, along with the fact that characters take a little too long to develop and conversations don’t move quite fast enough, it makes for slow going early on. However, towards the end, the story finally starts shaking things up a bit, leading to a cliffhanger that was predictable yet still intriguing. Certainly enough to make reading episode two a worthwhile read, especially if it’s quicker and smoother.

While I have not played the original localization of the game, I have seen screenshots, and I can say that, based on those, the re-localizing done by Sekai Project is a massive improvement. However, it is not without its own flaws and quirks. Near the beginning, there is a comment about the first footsteps left on the moon being 30 inches, but unless Neil Armstrong was wearing clown shoes, I don’t think that is quite accurate. There are a handful of other typos here and there, but nothing that makes things unreadable. There are a few times where the picture and the description don’t match up, and the game also contains a few idioms that don’t quite fit, but are probably the closest English equivalent to the Japanese idiom used. But in both cases, it’s not clear if this is translation error or inconsistency in the original writing without playing through in both languages.

Keep in mind that this is all done via text; the game has no voice acting. The game has a number of background music pieces, including several catchy tunes that I wouldn’t mind adding to my regular playlist; however there are times where the music strips away, leaving moments of awkward silence. Graphically, on the other hand, there is almost nothing to complain about in World End Economica. Many of the background images look absolutely fantastic, and the occasional interspersed CG images are great, perhaps worthy of being turned into desktop wallpapers. The only minor quibble is that the character portraits themselves are a little lower quality, but even they still look good. As an added bonus, if you liked the CGs and music from the game, once you finish up the story, it unlocks direct access to both libraries from the title menu.

In the end, World End Economica starts slow, but if players can weather the first couple hours, the story develops into something much more intriguing. I look forward to episode two, which I genuinely didn’t think I would be saying after the first hour.

Full Disclosure: This game was reviewed using a copy provided by Sekai Project.