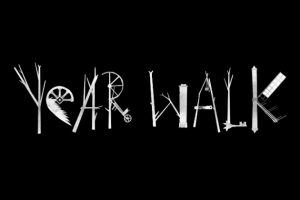 Simogo is one of the few developers on the iOS scene that constantly challenges the ‘short and predictable’ tag mobile games that are associated with it. Its projects are diverse, not only in terms of the innovative gameplay techniques but also the overall presentation. No two of its four titles are similar in any manner, and that is saying something in a platform with little variety to speak of. With Year Walk, Simogo hopes to deliver an experience that hasn’t been had by any gamer, ever. Do they deliver on their promise?

Year Walk has been shrouded in mystery ever since its announcement. Simogo has been very careful as to not give away major details, giving out only tid-bits to entice their fans. All of that makes sense now after playing Year Walk for the third time as it is an exceptionally well-made title, one that treads unfamiliar paths with gusto and stays with you long after the end credits roll.

Year Walk is based on an ancient Swedish legend according to which, certain people, by giving up worldly possessions and not partaking in food, water or social interaction for some days, can perform a Year Walk – take a peek at their future and what life holds for them. It’s not all cakewalk however; there are many untold, strange and possibly dangerous creatures existing outside of human logic, that lie between the year walkers and their ultimate goal. It is an extremely interesting concept, to say the least, and one that is unheard of. Simogo picked an extremely enticing and captivating Swedish myth, and the very attempt to make a mobile game based on an idea such as this is laudable.

The game plays out along the lines of some of the more traditional point-and-click adventures. The game world is divided into horizontal strips letting you navigate left and right. At certain points, you can jump to strips ahead or behind, and along the way interact with specific objects. The game has numerous puzzles for you to solve, and these puzzles are what set apart Year Walk. You see, Year Walk never ever holds your hand. From the moment the game’s eerily crafted title screen rolls in, you are on your own. There is no list of objectives, no map and no inventory. Heck, there’s no main menu in the game. You not only need to figure out the solutions to the puzzles but the puzzles themselves and what the game asks of you after each tricky conundrum. Year Walk often forces you to note down things you observe for future puzzles, which is not something you often see on this platform.

These puzzles are so unconventional that you tend to have a hard time figuring them out in the beginning. But once you do, there’s no better feeling in the world. A sense of pure euphoria washes over you when you solve one of the game’s many cryptic puzzles. And that, for me, is the sign of a true masterpiece.

Year Walk is also pretty scary; not because it abounds in cheap jump-scares, but because the game’s world is so unfamiliar that the things that unfold over your journey of the short campaign just make you queasy. Year Walk frequently indulges you in its many strange, twisted scenarios that constantly keep you on your toes which again, is a hard thing to achieve and Simogo does it with extreme finesse.

The game looks spectacular, simply because of its minimalistic design choices. Most of the game’s environments are snow covered landscapes, but the visuals are so refined and polished that they hold your attention right from the get-go. The 2D landscapes coupled with some select 3D objects make it an astonishingly beautiful journey.

What’s more beautiful is the game’s musical score. The haunting soundtrack, which is borderline faint only to escalate in tense moments, is excellent. It’s all original, and perfectly complements the game’s eerie environments. It abounds in perfectly composed violin and piano tunes, giving Year Walk an unsettling vibe which is precisely what Simogo intended to do.

Year Walk may be extremely short, not lasting over 2 hours, yet it’s one of the most beautifully haunting and original experiences I’ve had on an iOS device. It does something no one would’ve ever dreamt of, taking an old Swedish legend and converting into an effectively chilling puzzle title. Its brilliant presentation, smack-on and unsettling musical score, and unique & inventive gameplay style unite to deliver something that needs to be played to be believed. I would suggest the potential buyers of this game to download the Year Walk Companion, available for free on the App Store, to better understand the numerous strange creatures you encounter throughout the game. It makes the experience so much more rewarding.