When I heard that WayForward and Majesco were reimagining A Boy and His Blob on the Wii, I couldn’t help but get excited. I have fond memories of playing the original NES version Trouble on Blobonia, but it was probably also one of the first games to make me want to throw my controller. Did this version rekindle a warm nostalgic feeling or burning frustration?

Just like the original NES version, this version of A Boy and His Blob is a side-scrolling puzzle platformer. To say the true narrative of the story is minimalist is an understatement. If you’re looking for text or dialogue based explanations of story development, you will get more out of the instruction booklet than from the game. That’s not to say there is no story; rather, it’s explained via experience rather than words. On a stormy night, a young boy is awoken by a crash, when he goes outside to investigate, he finds a white, amorphous alien who follows him around. The blob needs help getting back home to defeat the evil Blob Emperor and save his planet. In order to accomplish this, you guide the young, unnamed boy and his newfound friend through 40 levels (plus 40 bonus levels) of puzzles in four different areas. In each level, three treasure chests are hidden, and if you collect them, you unlock the bonus levels. If you complete the bonus levels, you’re rewarded with things like concept art, level designs and more. At the end of each major area, Boy and Blob encounter a boss that must be overcome to progress to the next area. 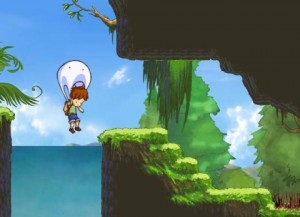 To get through all the puzzles and past all the enemies they face, Boy feeds Blob jellybeans. Depending on the flavor of the jellybean that Blob eats, it can transform into different objects, from a trampoline to an anvil to a rocket. I’m sure these two would have a field day in a Jelly Belly factory. Unfortunately, unlike the original NES version, you’re not told on-screen the names of the flavors, but you also don’t have to worry about running out of them, either. Instead, when you want to switch flavors, a ring comes up and you can see graphically what Blob will turn into when fed. Each level has its own set of beans that can be used; so, unfortunately, you can’t just use a rocket to get through the wide-open early levels or anything like that. Not that it is really needed early on. The first area of the game is pretty simple and gives ample opportunity to get a handle on the controls. The learning curve is pretty constant throughout the game; it gets progressively harder, but there are no huge spikes in difficulty. There were a couple of times that I had trouble in levels, but it wasn’t that I couldn’t solve the puzzle, it was more of a control issue. For the most part, the controls handle pretty well, but there were a few times that I struggled to get Boy and Blob to do exactly what I wanted. Blob’s AI would sometimes cause it to do something stupid to get itself stuck and I would have to call him back in the middle of a puzzle. However, the developers did alleviate some of the issue with this by making it so that when you call Blob three times, it transforms into a balloon and floats back to wherever you’re standing. Between the much gentler learning curve and fact that you have unlimited jellybeans and unlimited lives, the game is definitely more forgiving than its predecessor, making it available to younger gamers and casual gamers, too. 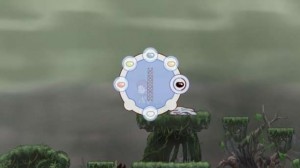 The game is pretty average when it comes to sound. The background music is pretty unremarkable, and while I thought I would tire quickly from listening to Boy yell for Blob, I never really did. On the flip side, what really makes this game is the graphics; there is something truly wonderful in their simplicity. WayForward did a great job creating a cute, warm cartoony atmosphere in the beginning of the game that grew colder and darker as you progressed toward the more difficult areas of the game. You start in an area full of greenery and progress through caves before embarking on a journey to the varicolored Blobonia, where the story moves to a cold, sterile mechanical city. While the characters and enemies are drawn rather simply, the emotions of Boy and Blob are still quite apparent, perhaps culminating with the fact that pressing up in the directional pad causes Boy to hug Blob in one of the cutest video game moments ever. Every time I felt myself getting frustrated with the game, I would stop and make them hug, and I couldn’t help but smile again. It may be a simple, silly thing to some, but I think the vast majority of players will appreciate that the option is there.

While A Boy and His Blob isn’t going to be making a run at game of the year, it’s certainly one of the most fun and accessible games I’ve had the chance to play in 2009. I think most any gamer can find something about this game to enjoy.