City Folk, the Animal Crossing release for the Wii, fell far short of many critic’s expectations. Nintendo hoped to learn from the mistakes of that subpar release with the 3DS edition Animal Crossing: New Leaf. So is this new edition another round of the same, or have they truly turned over a new leaf?

In New Leaf, you are no longer just some random villager who has moved to town; you’ve been selected to become the mayor of your new locale, even though you might not know it yourself until you arrive. As mayor, you still get to enjoy all the activities of the previous Animal Crossing titles (except for getting to play virtual console games, which, alas, was only in the GameCube version) plus a number of new functions. The core gameplay of New Leaf is relatively unchanged, with decorating and expanding your house courtesy of Tom Nook and his sons at the center of everything. The Able Sisters return with their clothing shop and new sister Label selling hats and eyewear in a separate section. There is a new shop, called Re-tail, where you can put things up for sale flea-market-style and both villagers and visitors can come and purchase them. Attached to Re-tail is the reupholstery shop, which lets you change the color of some of your furniture, a nice touch if you like the style but not the dye. 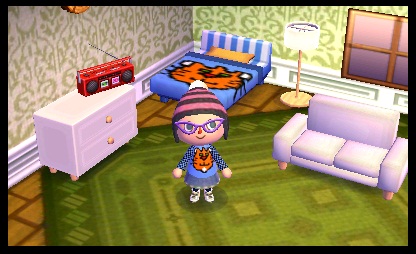 As for your new job as mayor, one addition is that you can sign off on ordinances which change how the villagers function. There are ordinances that make the stores open earlier or close later (which is helpful for gamers whose schedules aren’t so flexible), ones that help with beautification, and then there are the development projects. While you have always been in charge of planting new trees and keeping the weeds from growing in town, as mayor you will also be able to build a number of new buildings and decorations to help flesh out the town. These projects also require you to raise the funds to put them in motion, so you’ll have to split your money between paying off your mortgage to Tom Nook and beautifying the town. In the residential area of town, you can add benches, bridges, clocks and more for residents and visitors to enjoy. On the north side of town, where most of the stores are, you will also be able to request new shops to open such as a Museum Shop or the new Dream Suite, which lets you visit other people’s towns even if they aren’t online.

If your friends are online (or in the same room), there is plenty to do together, too. As always, you are able to head to the train station and visit your friends’ town, visit their shops, and steal their fruit (You can also destroy all their plants, if that’s your thing). But one thing that you can’t do is talk to them through voice chat. Nintendo missed a good chance to implement voice in New Leaf, instead choosing to only do text-based messaging. On the one hand, it does allow them to censor inappropriate messages, which is good for kids, but on the other, it’s annoying to have to stop everything just to type. It’s really the only step backward from City Folk, which was one of the few games with Wii Speak support.

Whether you’re playing alone or with friends, though, eventually sitting in your town gets tiresome (no matter how much you enjoy decorating your house). Fortunately, New Leaf also offers an island for you to visit and shake things up. The island is set to summer year-round, meaning that you can always expect the same fruit, bugs and fish to be available, even when your own town is covered in snow. There’s more to the island than just flora and fauna, though. There are also a number of “tours” which serve as minigames that you can play alone or with others. The minigames range from catching specific bugs and fish to a matching game to flower picking and more. Each game earns you medals which can be exchanged for furniture, clothes, equipment or a Club Tortimer pass. The pass allows you to visit the island with random strangers and play on the island with people around the world. 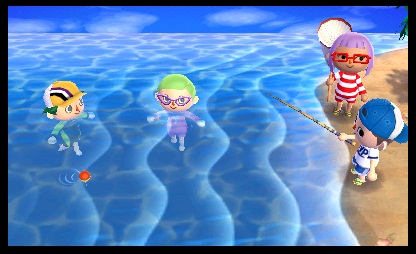 Just like previous Animal Crossing games, New Leaf is still set up for real-time play so holidays will happen on their proper days, and there are the occasional bug catching and fishing tournaments for you to participate in, too. Joan still comes by to sell turnips on Sunday mornings, as well. The other town visitors are a little more sporadic, making you stop by everyday to see who might be there. Crazy Redd returns to sell you artwork, both real and forged; Gulliver washes up on shore here and there as well, and Katrina will visit to give you your latest fortunes. One new visitor addition is Katie, a traveling cat who will give you presents if you take her to your friends’ towns.

New Leaf also offers subtle but fantastic improvements to the gameplay which streamline some of the more tedious aspects of previous games. You are now able to group certain inventory items together, such as fruit, so that they take up less space in your backpack. You can also assess multiple fossils and donate multiple items at once in the museum, which is great, but on the downside, Blathers doesn’t regale you with quite as many random sidenotes as he used to.

The graphics are still on the simple side, but they look good on the 3DS screen. The characters have all been touched up, and you can see the difference over previous games. The sound is also enjoyable and varied enough that you can play everyday without getting sick of the soundtrack.

All in all, yes, New Leaf is a lot of the same old, same old. You build and decorate your house, you do errands for other visitors, and you catch bugs and fish for money, but the additions that have been made to this edition make it the best and most addictive Animal Crossing title yet. Nintendo has definitely learned their lesson from City Folk and moved the series forward in a big way. Hopefully they will reintegrate voice chat in the next edition, but overall, if you’re even remotely interested in this type of game, New Leaf is worth picking up as it’s one of the better 3DS offerings thus far.