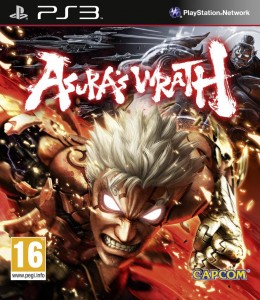 There is something you need to know from the get go: Asura’s Wrath is unlike any game you have played. It doesn’t limit itself to the confinements of traditional video game conventions and ventures into a territory that only a handful of games have ever tried to. It beautifully blends the crazy action and epic scale of titles such as God Of War 3, while opting for an immersive control  scheme similar to Heavy Rain. Apply a layer of pen & ink style anime visuals to the mix and you have Asura’s Wrath. Planet-sized bosses, enemies bursting through a planet, swords long enough to slice a planet in half; as good as they sound, they look absolutely jaw-dropping and are truly a sight to behold.

The fact is, you’ll either love it or hate it. There’s no middle ground whatsoever, pretty ironic considering the fact that the game itself manages to walk a tightrope between being an anime and a game. CyberConnect2 opts for an entirely different take on the action game genre, choosing interactivity over full-fledged gameplay, creating a title that is extremely atypical of the gaming industry. As opposed to a traditional button mashing fare, Asura’s Wrath ends up being more of an interactive anime. This unconventional approach makes this particular game a hard-to-ignore title that begs for your attention.

Asura’s Wrath’s story is one of the main reasons you’ll be hooked to your TV screen. The story starts with Asura, who is one of the eight guardian generals of a planet  named Gaea. With a race of creatures called the Gohma plaguing planet Earth, the generals take it upon themselves to eradicate them. But things take a turn for the worse when Asura is betrayed by his own kin. Following the death of his wife Durga, and the abduction of his daughter, Mithra, he is banished from his own home. Awakening 12,000 years later, Asura pledges to end the now self-proclaimed gods’ tyranny and free his daughter, using his wrath as a fuel to drive him forward in his quest for vengeance.

With wrath being the only motivation for Asura’s actions, his other emotions (say, love for his family) take a backseat, and this lends a shade to Asura’s character which makes him a bit hard to like. On one hand, you connect with his anguish and feel his pain, but on the other you also can’t help but feel that his anger blinds him and makes him believe that his enemy isn’t dead till he’s punched him a couple of thousand times, blasted him to space and pummeled him back to earth for good measure. Whether he’s got 2 arms, 6 arms or none at all, he lives to fight. You definitely won’t hate him, but if he only stopped his incessant screaming for a second, he would have been a much more likeable protagonist. And despite being a demigod, he’s outfitted with robotic arms, and never sheds an ounce of blood in spite of being sliced in two, punctured with poles,  or having his arms hacked off. No explanation given, none desired.

The game has a bizarre and unique fusion of Asian mythology and science fiction, with certain imagery and terminology, to some extent, borrowed from Hindu and Buddhist cultures. Gods flying around in their own private space ships and space bikes, double thumbs up! Asura’s Wrath embraces this wackiness and yet manages to deliver an engaging story that will have you playing one episode after the other to find out what happens next.

The game follows an anime series-like format, divided into 3 parts with 6 episodes in each, totalling 18 episodes, each lasting around 20 minutes. Each episode begins with titles introducing the crew, and the last episode of each part ends with credits rolling down, just like an actual TV show. This format only goes on to blur the lines between a playable game and an anime.

Speaking of playability, there is not much gameplay to speak of. Each episode has roughly 8-10 minutes of it, and you’ll spend more time watching the game than playing it. But whatever gameplay there is, it’s varied. In one episode, you’ll be battling waves of enemies like any action-adventure game, with a combination of light, heavy and projectile attacks at your disposal. In another, you’ll be engaged in an on-rails shooter section, and in yet another, you’ll be glued to the screen looking for button prompts in Quick Time Events (QTE), raining flurries of punches upon your foes. You might even find yourself engaged all three in a single episode. Whatever the gameplay style, the objective remains the same: filling the rage bar by inflicting damage upon the enemies, primarily using QTEs, and entering Burst Mode which allows you to launch a barrage of devastating attacks and progress further to the next section. A secondary gauge can also be filled by damaging your foes, allowing you to enter Unlimited Mode, wherein you have an increased rate of fire for a short duration.  While in unlimited mode, unleashing a single heavy attack won’t cause you to overheat, which normally keeps you from using the heavy attack again for some time till the overheat meter cools down.

While this certainly sounds fresh (and to some extent it is), the novelty wears off rather quickly, largely due to the generic and derivative enemies. It becomes excessively repetitive especially towards the end. The mini-boss encounters are too similar to each other to be any fun or challenging. The boss fights, however, are a whole different story. Although they feature much of the same gameplay, they are so magnificently conceived, the sheer spectacle of it all will have you drooling all over your controller. The action-packed and adrenaline-fueled boss fights are, without a doubt, some of the best you’ll ever see. The end of each episode is followed by a result screen that assigns you a grade in three regards – time of completion, battle points, and synchronization rate, from S (the best) to F (the lowest of lows). Getting higher grades unlocks achievements, trophies, artwork, new gauges that offer added bonuses such as reducing the damage taken and so on, but all of this still won’t convince you to go for a second play-through, even if you are an all-out sucker for golden S’s.

The amazing boss fights would have been nothing if not for the Asura’s Wrath’s dazzling production values. Visually, the game achieves artistic brilliance. The animation is right at the top with the best of Japanese anime, and Asura’s Wrath does a bang-up job of displaying the developers’ immense love for the format. The cinematography is the work of a sheer genius and the characters are beautiful. The luminous and dizzying special effects are once again, some of the best I have ever seen. On the downside, sometimes there was an absolute overload of these special effects on the screen, and as a result things got extremely hectic to the point that I missed a few button presses. Also, the environmental textures and terrains were quite blurry at times and paled out as compared to the rest of the game. But these shouldn’t detract from the enjoyment.

The orchestral soundtrack is a nice accompaniment to the look and feel of the game. Even though there isn’t much variation as most of the initial score has been recycled and reused in the later part, it’s still soft on the ears.  The voice-overs won’t impress you all that much, with some characters sounding like absolute anime stereotypes: loud and over-the-top. The only standout is Asura himself with every dialogue carrying an impressive, albeit occasionally excessive, degree of angst.

So it’s clear that Asura’s Wrath gets a lot of things right. The cinematic QTEs, the majestic action set pieces, ridiculously over-the-top boss fights, it’s all in there. But it just doesn’t have enough content to justify a full retail purchase. A game with a campaign that spans a little more than 6 hours, no matter how enjoyable those 6 hours are, is still too short in the present times. To top it all, the lack of any hidden collectibles or explorable levels and practically nothing in the way of replayability will leave you with a sour taste in the end. But all said, it still is a stand-out game that does something commendably different, and begs to be experienced. And if you love games that offer nothing but pure, unadulterated fun, it would be wise of you to do so.