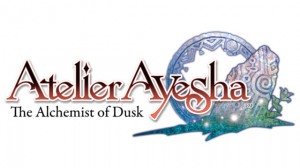 Atelier Ayesha: The Alchemist of Dusk is the first game published in North America by Tecmo Koei. In the first game since the completion of the Arland trilogy and Gust’s purchase by Tecmo, can the Atelier team continue to capture the magic they found in Arland under new ownership?

The story follows titular heroine Ayesha, a young apothecary who lives alone near some old ruins. A few years prior to the start of the story, her sister Nio disappeared while searching the nearby ruins and herb garden for flowers. While visiting the garden on the anniversary of Nio’s disappearance, Ayesha catches a glimpse of her younger sister who promptly disappears again, leaving behind some glowing flowers. Ayesha takes one of the flowers and with the glimmer of hope that her sister is still somewhere, decides to set out on a journey to save her, though she hasn’t a clue where to begin on her own. As the story progresses, Ayesha collects memories of major events in her diary, and using memory points which she earns from completing objectives, she can turn those memories into power-ups such as increased speed or more efficient alchemical reactions. The diary also serves as a recap of the events thus far, so if you put the game down for a while, it may jog your memory about past and current objectives.

Fortunately, Ayesha doesn’t spend much of the story alone, or else her diary might be rather empty. With a clue provided by a standoffish gentleman named Keithgriff, who happens to be investigating the ruins, she sets out for the nearby town where she meets Regina, the first of many companions. While unsure of herself at times to start, Ayesha manages to develop into a rather strong and independent protagonist. Each character that she brings along with her has their own reasons to travel and generally manage to compliment her character without making her seem incompetent or completely dependent on them. The story and character development are the major highlights of the game, but it would be nice if it were paced better. Like previous Atelier titles, you unlock scenes with each party member as you raise their friendship rating, eventually having the chance to unlock an ending for each character. Unfortunately, should you complete the main objective of saving Nio with time to spare (which is not a difficult task, even on your first playthrough), the post-game story is rather sparse, becoming mostly a matter of fetch-quests and optional boss battles. While some of these quests tie into the character endings you can unlock, there is not a lot of narrative to weave them together, making the game feel a little listless until you reach the end of the third year and see the results of your efforts. 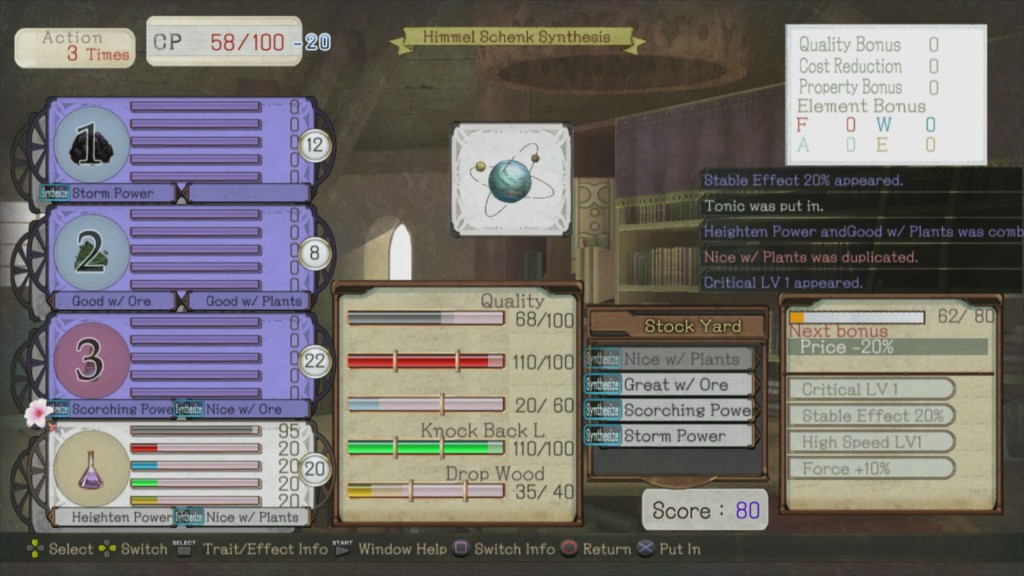 Of course, it would not be an Atelier title without the quests and alchemy systems. In Ayesha, you can perform quests for the townsfolk by creating items, battling enemies or gathering materials from around the land. Most of the villagers will give you multiple quests over time with varying time limits ranging from a few months to two years to complete them. Most of them are relatively easy to finish, but the quest system has one big flaw: it does not check if you have access to certain areas before it assigns you a quest. So, if you’re too efficient, you may be given a quest which requires access to an area you cannot reach until after the expiration date. While the penalty for not completing a quest in time is not severe (you simply lose out on the monetary rewards), it seems like a silly oversight. The only other time-sensitive sidequests revolve around a semiannual item competition put on by eccentric shop owner Harry Olson. Ayesha does not have the quarterly requests to fill like the Arland games; instead, every six months, Harry has an optional  competition to see who can provide the best item with the winner receiving a substantial cash prize. Unfortunately, this too can be a bit easy if you manage to synthesize a high quality item early on, as you can just use it to win every competition.

While the principles behind the synthesis system remain intact, you still gather and purchase books to learn the recipes initially, when you return to your cauldron, there are some changes from previous iterations. The interface is more intuitive in some ways and makes it much easier to gauge which effects your resulting items will have. As you level up, Ayesha will learn some skills to help manipulate the effects, letting you fine-tun your alchemical reactions. Using the items you gather while exploring and battling, you can create various medicines, attack items, sundries and accessories. Surprisingly, though you cannot craft your own weapons and armor, nor is there any blacksmith to be found. As a result, you’ll have to take the weapons you loot during exploration and hone them using various synthesized items, which feels like a strange step backwards. Exploration is pretty standard in the series now as you walk from place to place on the world map and enter a dungeon area filled with monsters, treasures and gathering points. While the gathering system is relatively unchanged, the battle system has received an upgrade for the better.

Battles in Atelier Ayesha take some cues from its predecessor Meruru, but Gust has continued to tweak the system here and there. This time around, the battle system allows you to move around the four sides of the battlefield to get back attack bonuses. In addition, Ayesha has the ability to perform follow-up attacks when another character takes a turn or defend another character when attacked, techniques that only the partners had in Atelier Meruru. This simple mechanic further manages to reinforce the idea that Ayesha is more able-bodied and independent than some of the previous heroines. For the most part, the battles are either evenly balanced or slightly on the easy side, and the only real shocks occur in the later optional battles where the bosses can attack four times in a row, which can quickly debilitate even a maximum level party. 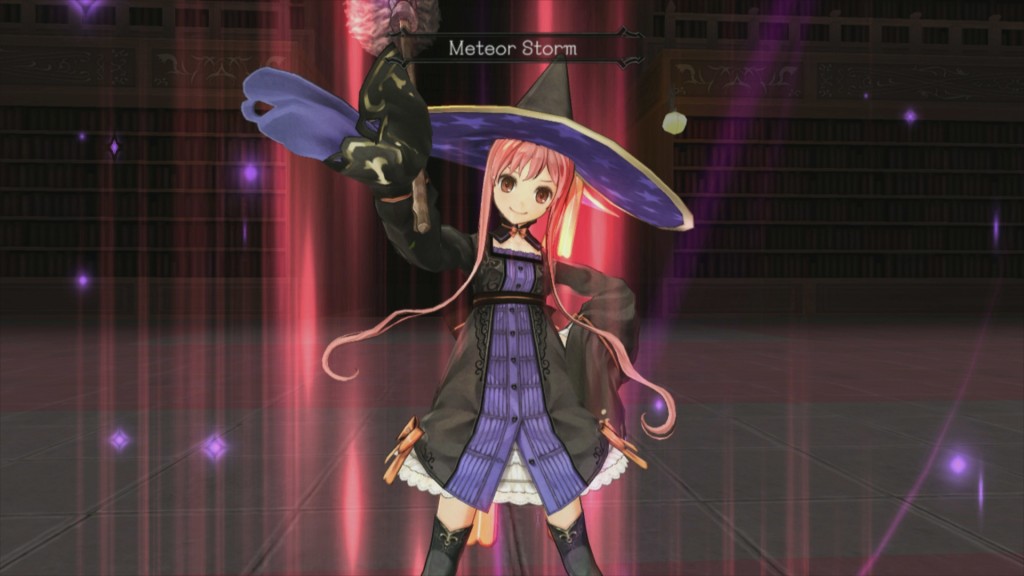 Even if you find yourself frustrated in these later battles, you’ll have the consolation of beautiful graphics and enjoyable music. The cel-shaded techniques of the previous games make a return, looking as good or better than ever. The various locales and character designs look lovely and the overall aesthetic which features a wash of pastels and intricate shades meshes quite well withe floral theme of the game. The one visual quirk that the game has is that the character’s mouths do not stop moving during dialogue scenes, even long after their lines have been read. While certainly not a game-breaker, it was a little jarring to see at first.

The soundtrack to the game, like the storyline, feels a little more grown-up. While still quite enjoyable to listen to, the background melodies on the map and in the towns are generally less playful and more muted. There are of course exceptions to the rule, as the story has some more silly songs and sound effects for the comical moments. The game also offers multiple battle themes, depending on where you are exploring, which is a blessing considering how many fights you will be in during the course of a playthrough. The English voice cast ranges from decent to good, though no one really knocks it out of the park. Some of the scripting could be better, and that may have had an effect on the quality of the acting, too.

Veterans of the Atelier series may find Atelier Ayesha a bit on the easy side. If you’re efficient with your gameplay and keep up with your missions, there can be a few points where you will be biding your time for a few months. While these are a good chance to get some alchemy done or take care of any quests in your backlog, having to wait on progression at times can get a little grating. When the story does come back around, it is an enjoyable though sometimes somber tale to play through. Atelier Ayesha certainly has its comical moments, but overall the game is not quite as lighthearted as previous iterations. Atelier Ayesha: The Alchemist of Dusk makes for a good entry point in the series if you’re uninitiated and is about on par with Atelier Meruru. The improvements to the gameplay are nice, and the story is enjoyable, but sometimes it just feels too easy. Some people may enjoy it for the fact that it means you can concentrate on enjoying the story, but others may wish that there was more challenge before outside of the optional bosses.