Atelier Escha & Logy is the fifth iteration of the series on the PS3 and the second title in the Dusk trilogy. It also marks the first North American release where NIS America did not have their hands in the localization. So, how does the dawn of the era of Tecmo and Gust fit into the tales of the Dusklands?

As the title might suggest, the game follows Escha and Logy, two newly hired alchemists who work for the Colseit research and development department, which is headed by Marion and Linca from Atelier Ayesha. Situated in the Dusklands, the area surrounding the town of Colseit is slowly dying. The plants are decaying and the soil is turning to dust thanks to an extended drought. The duo are chosen to figure out the cause of the drought, and it’s quickly determined that something in the ruins nearby might have a solution to their problem. While you can choose either Escha or Logy as your protagonist (a nice change of pace from having one dedicated leader), their stories have the same basic goal: to reach the unexplored ruins in the sky in hopes of an answer. Even though this is the main objective for the party, the ruins are only mentioned sparsely through the first two-thirds of the game, and so I found myself forgetting that they even exist at times. Instead, the duo’s day-to-day lives were taken up with completing missions every four in-game months, exploring and synthesizing every recipe that popped up. As a result, the main story feels like an afterthought, and while the character storylines serve to fill in some of the gaps, it’s gameplay that drives Atelier Escha & Logy. 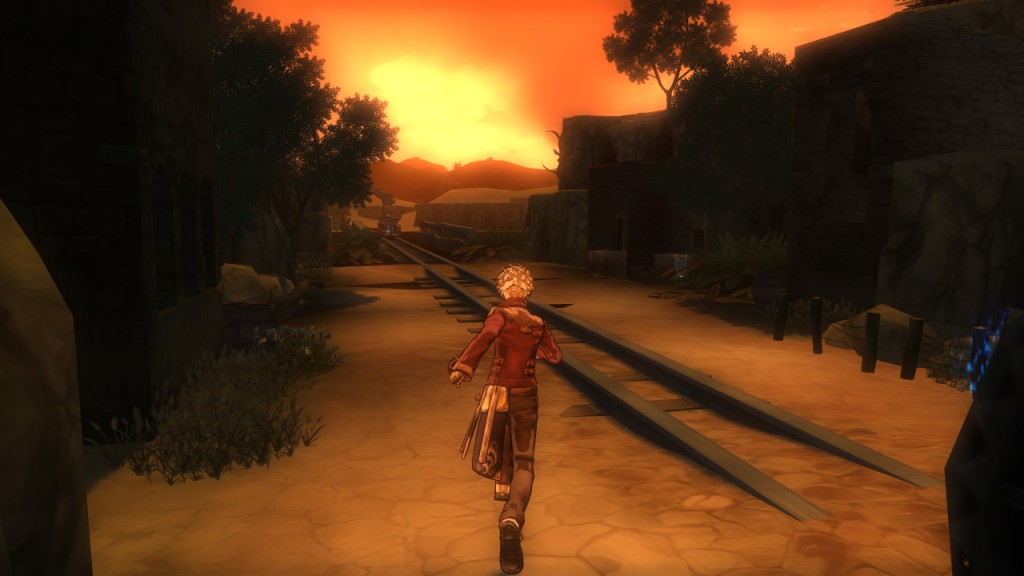 As is standard for the Atelier series, there are three facets to the gameplay–the aforementioned missions, exploration and synthesis. To keep the game moving, every four months, you are given a new overarching mission to achieve; it could be to exploring a new area, synthesizing items for an upcoming mission, or defeating a massive monster. Once this mission is complete, you are given free time until the next mission begins, and you have access to a number of sidequests to complete. Completing missions and sidequests provide you with bonuses (such as recipes or money) and points to raise your standing within the R&D department. As your rank increases, you can access research options to increase the rate of experience gain, increase movement speed and make synthesis easier. The missions for each period are laid out on a 5×5 bingo sheet, making it easy to track what you still need to do and what the rewards are for it with the official mission for the period at the center.

Whether the critical mission is about synthesis or finding a boss monster, the task will always come down to exploration at some point. Sending your party into dungeons allows the group to gather synthesis materials as well as find recipe books and locate secrets from the past. There are a couple locations from Atelier Ayesha that are revisited late in the game, but until then all of the dungeon content is new and well-designed. The locations are broken up into segments that keep the individual dungeons from getting too long, but they aren’t so short as to feel like a waste of space. While the story sends you back to previously explored areas a few times, most of the time you’ll have at least one new dungeon per period, keeping things fresh. As you explore and gather within the dungeon, you’ll encounter enemies on the map in traditional Atelier style, throwing you into battle. 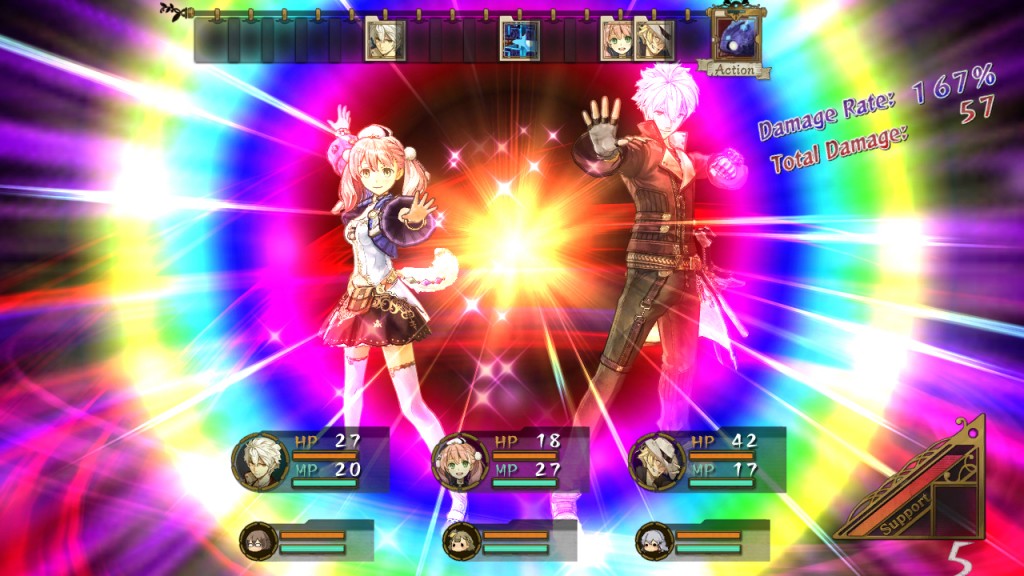 The battle system has been modified slightly from past iterations, though the roots of the Atelier system are clearly present. The battles are still turn-based and feature a mixture of physical attacks, healing items and alchemical weapons, but you can have up to six members set up for battle now–three active and three as support roles, fleshing out the supporting attack and defense possibilities seen in previous games and making them a much more pivotal part of fighting. Characters can switch between front and back rows, with those in the rearguard recovering HP over time, but most importantly, stringing a series of supporting attacks together will trigger an extra strong special attack which can change things up in a hurry. Having two alchemists in the party also gives you access to the special skill “double draw,” which allows both Escha and Logy to use bombs and other alchemical items together, amplifying their power. While these special attacks aren’t required to beat the game at the most basic level, figuring out the intricacies of the new battle system are vital to defeating the optional bosses during the endgame.

Of course, it wouldn’t be an Atelier game without alchemy, too, and like the battle system, the synthesis system has had a minor overhaul. While hardcore series veterans might decry the simplified system, the new interface will be a welcome sight for newcomers and those who found the previous versions opaque. As items are chosen for a given recipe, it shows what elements they will contribute to and how strong an effect they have. Once synthesis starts, special skills can be used to help boost item effect, increase the quality of the item, unlock new item properties, or rebalance the elemental components of the synthesis. The last two of these are important as they determines the inherent effects the item will have. While the process itself is much clearer and results in fewer suprises, because of localization, the effects themselves are not always clear. One of the biggest stumbling blocks that alchemists might face is the choice of property strength being indicated by L (light) and S (strong), though these can easily be mistaken as L for large and S for small until you learn otherwise. Other minor issues pop up in that some of the property descriptions are not accurate; for example, both frame compress and frame expand have the same effect description despite doing opposite things. 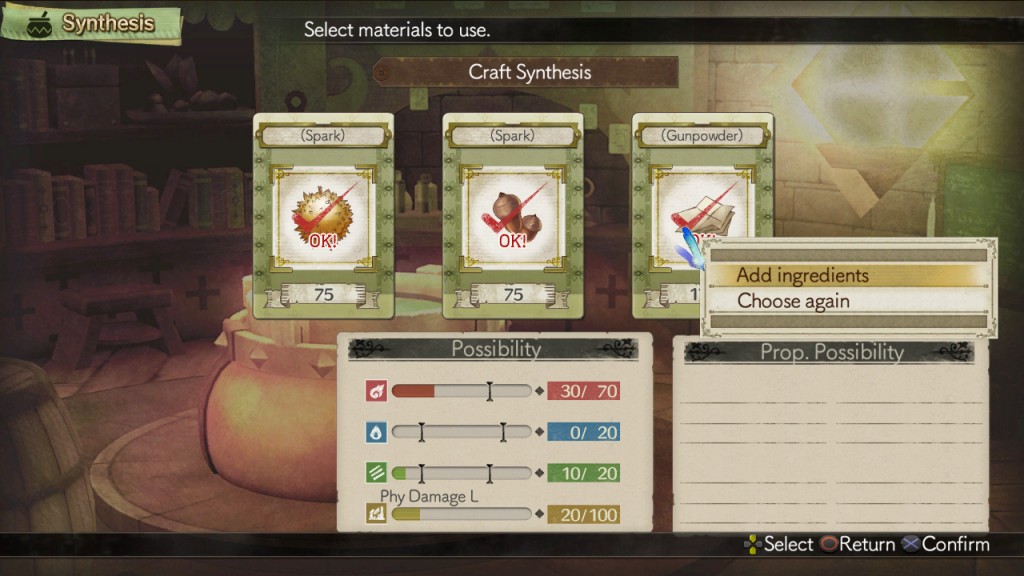 Unfortunately, this trait issue isn’t the only sign that the game suffers at times in its English localization. I spent a good while scratching my head why the protagonists’ names were pronounced “Es-ka” and “Lodgy” until I realized that it’s a very roundabout play on words: In Japanese, their names would be Esuka to Rojii, pronounced “eschatology,” the study of the end of the world. While that–appropriately–explains their names, it still doesn’t excuse the other quirks, like atelier being pronounced “uh-telly-er” instead of the traditional pronunciation “uh-telly-ay” (ətɛliɚ and ətɛlie for you IPA fans). Minor issues though they may be, the hit-or-miss English voice work is brought to the forefront thanks to the occasional issue with the dialogue itself.  One fine exchange:

A: What are these ‘Unexplored Ruins’?

B: They’re ruins, but no one’s been there yet.

This gem of dialogue may have been intended as a joke, but it wasn’t delivered as such. Those who played Atelier Ayesha might also notice that Linca’s voice is jarringly different in English (less so in Japanese), and while there are reasons for it in the game, it could have been done better. While the voice work is kind of mediocre, the music is quite good. Some of the pieces are borrowed from or very similar to pieces from Ayesha, though this isn’t a bad thing. The game features some different pieces depending on whether you are in Logy’s or Escha’s storyline, and the pieces are quite character appropriate.

Overall, Atelier Escha & Logy has some of the best gameplay of the PS3 era Atelier games. Fans of the series will be pretty happy with the changes, except where it makes the game a little too easy at times, but those changes will help newcomers get used to the system quickly. However, the lack of polish and mediocre story are a a detriment to an otherwise very fun game.