[Don’t forget to enter our Atelier Meruru giveaway for your chance to win a copy of the game!] 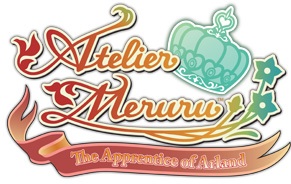 The story of Atelier Meruru follows Princess Merurulince Rede Arls (“Meruru” for short), a member of Arls’ royal family. Lord Dessier, her father, has signed an accord with the Republic of Arland that in five years, Arls will become part of the Republic. However, the rural and undersized kingdom must prove itself in the meantime by developing itself to catch up with the rest of Arland. Fortunately, Totori, protagonist of the previous game, has come to Arland to help with the development and takes Meruru under her wing. The young princess is entrusted with the future of her kingdom as she decides how to focus the growth of her tiny community. Lord Dessier agrees to let Meruru learn alchemy as long as she uses it for the good of the kingdom; however, if she fails to adequately improve the standing of Arls, she must turn her back on alchemy forever. 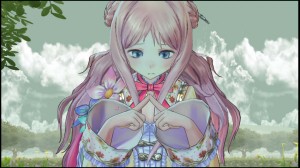 In order to develop the land, Meruru and her companions must travel around Arls, performing a variety of quests.  These quests, ranging from delivery of synthesized items to exploring new areas to hunting down monsters, will earn development points on completion. These points can be turned into new buildings in a manner reminiscent of the DS game Atelier Annie. The new structures add population to the kingdom as well as a variety of bonuses such as increased experience points or more items in the shops. At first, it may seem that you have no choice but to build your city in a manner to maximize population growth in lieu of some of the better bonuses; however, once you get a feel for the system, if you’re efficient, you may not need the major population-boosting buildings at all. While this means that you can have some variety in your development plans in a way that best suits your playstyle, it can also make the game feel a little easier than expected. In addition to these development quests, more traditional hunt, fetch, and synthesize quests are available from Filly at the tavern. These quests are the best way for Meruru to earn money, as battle will earn you next to nothing. And yes, the same Filly who gave out the adventurer quests in Atelier Totori is back reprising her role in Atelier Meruru.

Totori and Filly aren’t the only familiar face in this game, though. In fact, this feels more like an Atelier Totori reunion than a game that takes place in a separate kingdom. Meruru, her friend and attendant Keina, and bodyguard Lias are the only locals you can take in your party. Along with those few locals, you will be able to recruit Rorona, Sterk, Gino, Mimi, Gio and Esty from Arland as the game progresses. There are other, non-recruitable characters, including shop owners Pamela and Hagel, who pop up as well. With so many familiar faces, Meruru almost seems out of place trying to take the lead in this story. Her desire to learn alchemy, while genuine, comes off as superficial at times, and her goal of developing a kingdom that will soon lose its name is not as engaging as some of the other games in the series. 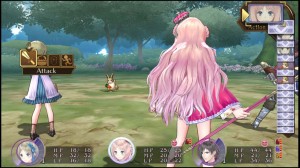 While the story is a little meager, the gameplay has received some nice refinements. There have been some minor redesigns to the menu system and both the quests and synthesis menus have been slightly revamped as well. Atelier Meruru also offers quick travel around town so having to run to the store for one or two synthesis ingredients only takes moments instead of a minute or two, and you’ll be thankful for it if you want to see every cutscene too. Most of the cutscenes will activate simply by entering an area; so jumping from place to place is a quick way to make sure you don’t miss anything. Outside of town, Meruru runs from point to point on the map, and each point opens up into a small dungeon. Time passes as you move from point to point on the map or when you gather items or fight inside of a dungeon. Atelier Meruru only has yearly goals; so, you have a little more freedom with your time as compared to previous titles, but between synthesis and exploring, there’s plenty to be done.

Battles are fought by your party of three in classic turn-based style. During battle, you can see the turn order along the right side of the screen, giving you a chance to plan your moves thoroughly. All characters except Meruru have the ability to use special skills in battle while only the alchemists can use items during battle. Meruru’s companions also have two additional action gauges that charges as battle rolls on. When one reaches certain levels, the characters can defend the princess from attacks or join her to perform combos. These combos will also amplify the effects of the items Meruru uses, and using them effectively is key to defeating some of the optional bosses. The second gauge allows the companions to perform a super attack. Each character has two special animations to go along with it: one for dealing damage and one when it delivers the killing blow on a monster. While you will rarely need them in standard battles, it adds a charming touch when you can finish off a boss with one of these moves. 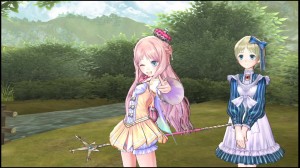 Atelier Meruru features a slightly upgraded version of the beautiful designs and soft color palette seen in the previous Atelier games. The character designs are all very cute and offer a nice change of pace as many video games strive for more and more realism. The only real complaint about the graphics is that there simply aren’t very many different enemies to look at, which has long been a problem for the series. For the most part, any remotely related enemy is simply a palette swap of its cousin, and the lack of variety could get boring after multiple replays.

Much of the music in the game is reminiscent of its predecessors; however the songs featured in the opening and ending credits fall a little short in comparison. The vast majority of the songs featured are very upbeat and enjoyable, but aren’t quite catchy enough to get stuck in your head. If you do happen to get tired of the music, you can change the songs to ones from Atelier Totori or Atelier Rorona, or for $3 you can purchase a DLC pack that offers over 200 other songs from throughout the Atelier series, which might be a nice option to have if you intend to play through each of the game’s endings. Both the Japanese and English voice acting are pretty standard fare for JRPGs, meaning that there’s bound to be one or two voices that will eventually grate on you, but overall not too bad. The dialogue is mostly lighthearted and humorous, but there are times where it could use a little more depth.

In the end, Atelier Meruru: The Apprentice of Arland is a very good game but it falls a little short of its predecessor. The seemingly easier difficulty may be good for newcomers to the series, but may be a little disappointing for those who have already honed their alchemy chops yet still want a challenge. Nonetheless, for fans of the series or those looking for something a little different, it’s a very nice, and very addicting, pickup.