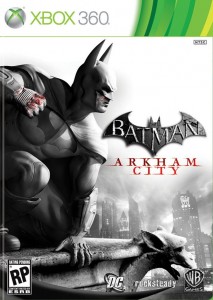 After the release of Batman: Arkham Asylum a few years ago, Rocksteady Studios showed that not only was it possible to create a stellar video game based off a comic book license, but that the characters and elements from a comic book could be integrated within a game without alienating newcomers and enraging comic book aficionados. When the sequel, Arkham City, was announced, it raised as much uneasiness as it did excitement. While fans were excited, those that attempted to keep a more reserved outlook were worried that the game would not be able to live up to its predecessor’s name. Having beaten Arkham City, I can confidently say that this is one of the best games of the year, despite some minor flaws with the story and presentation. To put it simply, you will not be disappointed.

In case you’ve been hiding under a rock, or more likely, you didn’t play Arkham Asylum, Arkham City picks up a few months after the ending of the first game. Warden Sharp has taken credit for stopping Joker, and he has become the mayor of Gotham. Working in tandem with Hugo Strange, he has announced the opening of Arkham City, a cordoned off section of Gotham that will house both the inmates of Blackgate Prison and the patients at Arkham Asylum, as those two institutions have been deemed unfit to operate. With Strange given complete control over the “City”, Batman takes it upon himself to investigate what is going on. While I won’t spoil the rest of the story, expect to see a lot of new and former villains, as well as a slew of other interesting allies. The campaign not only features an intriguing story, but is beautifully paced, which is something we’ve come to expect from Rocksteady. While the ending to the story isn’t perfect by any means (expect some less than stellar plot twists), it is still very entertaining and well written. My only major complaint is that in order to fully understand the events that took place between the two games, one would have to read the Batman: Arkham City comic book series. While that wouldn’t be an issue, the comic book isn’t included as a digital bonus with the game.

Editorial Note: If you want to fully understand the plot line from the game, a synopsis of the comic book can be found at its Wikipedia Page, or it can be ordered from Amazon.com. While it is not necessary, many of the questions that arose when playing Arkham City are answered in the comic book series.

One of the biggest changes to the game’s formula is that Arkham City is an open world. It’s nothing like Liberty City or San Andreas, but rather it is much more similar to a hub world from a Zelda game. You will travel to different key buildings throughout the campaign, where you will slowly drive the story forwards. The villains have set up headquarters across the city, so you will spend some time flying around town, but for the most part the story will unfold within specific indoor areas. The open world area mainly serves as a way to discover and complete side quests, which range from tracking down an assassin, rescuing political prisoners from henchmen, and solving the Riddler’s many challenges. Returning from Arkham Asylum, Riddler has hidden over 400 different riddles throughout Arkham City, which range from out of reach Riddler Trophies to actual riddles you must solve. They make for a good time, and this time around you are able to tag Riddler Trophies for later collecting, in the event you don’t have the right tool or gadget for the job.

If this doesn’t sound like enough to do, Rocksteady has included a new game plus mode, which is one of my favorite additions. Essentially, this acts as the hardest difficulty mode for the game, with increased enemy difficulty, lack of enemy counter indicators, different enemy configurations, and tougher bosses. This mode makes for a good time, as you keep all your original XP and gadget upgrades, so you truly feel like the Dark Knight right from the start. The Riddler Trophies and riddles you solved the first time through will still be saved, so you won’t have to retread old ground. Another mode that returns from the first game is the Challenge Room mode, which has you face off in Combat or Predator Challenges. Combat Challenges have you beating up waves of thugs, while vying for a high score, while Predator Challenges have you sneaking around a room while stealthily eliminating bad guys. Doing well on individual challenges earn you medals for each room, and there are leader boards to compare times and scores. You can even undergo Riddler Campaigns, which link three challenge rooms together, and feature gameplay modifiers like health and time limits.

While the game does a great job of putting you into the world of Batman, it does an even better job of making you feel like the Dark Knight himself. For those who skipped out on Arkham Asylum, the combat is fast and fluid. Actions are tied to the four face buttons, giving you the ability to strike, counter, evade, and stun. By tapping the strike button in conjunction with a direction, Batman can attack a specific enemy, not unlike the Assassin Creed series. However, it’s the fluidity of the combat that really shines. You can easily string a series of attacks, counters and evades together, which racks up a combo counter which ties into the amount of XP you gain for each brawl (XP allows you to buy gadgets, attacks and suit upgrades). While you can evade moves, countering is a more effective tool, which allows you to turn a potential attack against you into a series of attacks onto an enemy. On New Game Plus, the image that notifies you when to counter is absent, but it is there on lower difficulties. While the combat has remained mostly the same, there are a few additions that enhance the experience. The ability to counter multiple foes has been included, and some new gadgets like smoke pellets and a “stun gun” allow you to handle armed and unarmed foes more easily.

Movement and travel has also seen some drastic improvements. While gliding, Batman has the ability to dive bomb, which allows him to gain momentum which can be used to travel longer distances. It is also much easier to grapple onto buildings and objects, and you can purchase an upgrade which allows you to grapple onto objects to gain speed, then continue flying, allowing you to (theoretically) continue flying forever. Detective mode makes a return as well, allowing you to analyze the environment around you to find clues, or see enemies through solid objects. While it wasn’t perfect in the first game (there was a heavy incentive to keep detective vision on, which took away from the opportunity to enjoy the game’s amazing graphics), it isn’t used as much in Arkham City, which works well, since you won’t grow tired of it.

When you aren’t using detective mode, you’ll be able to appreciate Arkham City for its beautiful graphics. Not only is it technically impressive, the city is wonderfully designed, with hulking towers and wonderful weather effects. While the outsides of the city are similar in look, the interiors of buildings provide a wonderful contrast. The animations during fighting are varied and fluid, with more than twice the amount of animations from the previous game, and it all runs at a solid frame rate. The sound design is also well done. The soundtrack matches the mood of the game, and helps to add tension when needed. The voice acting is what really steals the show, with Kevin Conroy and Mark Hamill reprising their roles as the Dark Knight and the Joker (respectively). They deliver every line perfectly, and the minor characters do a great job as well. While some might find Harley Quinn’s voice a bit annoying, chances are it will only make you want to beat her even more.

Before its release, Rocksteady Studios revealed that Catwoman would be a playable character in game. This is somewhat true, since the content is not available on the disc. It is available as a download through a code included in all new copies of the game. Catwoman is featured in 4 sections which are seamlessly integrated within the game, and if you don’t have the Catwoman content, you won’t even notice that the content is missing. While Catwoman doesn’t control exactly the same as Batman, her sections offer a nice change in pace, and gives you insight as to what is going on behind the scenes. Outside of the main story, there are Catwoman specific Riddler Trophies and  challenge maps.

While there are some minor issues with the plot, Batman Arkham City comes close to being a perfect sequel. The tightened combat, voice acting, breakneck pacing and the addicting collectives make for a game that stand out as a serious Game of the Year contender.