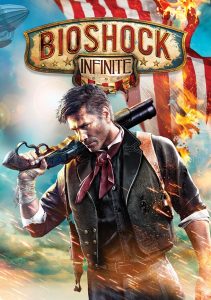 A follow-up to the critical darling of 2007, Bioshock Infinite has some very large shoes to fill. It also doesn’t help that its development has been troubled, to say the least. Announced back in August of 2010, it was originally slated for release in October 2012. That May, though, the game’s release date was pushed back a full five months, which is never a good sign. While I was originally very excited by the first few demos, months of near silence left me a bit worried. Could Bioshock Infinite become the next Duke Nukem: Forever? Well, the short answer is, “No;” the longer answer is, “Hell no.” So, I’m done then, right? Really, I have to say more than that? Ok, fine, I guess. For those interested, I played the PC version for this review, although I imagine it won’t affect the experience very much.

In an homage to the original Bioshock, players begin Infinite by making their way to a foreboding lighthouse in the middle of the ocean. A note, stained with blood and nailed to the door, provides players with their first clue as to what is going on. “Dewitt, bring us the girl and wipe away the debt. This is your last chance.” It is with this in mind that players hop into a rocket and are shot skyward, only to find an entire city floating above the clouds. This city, named Columbia after the personification of the United States, seems at first glance to be a peaceful utopia. In fact, players will spend the first hour or so of the game simply walking around, watching people as they celebrate the city’s anniversary of seceding from the union. However, as might be expected from a Bioshock game, things are not what they seem. In addition to the chaos caused by the player’s actions, the city is rife with deep-rooted prejudices and tension. The tale that Irrational Games tells is very mature, and calls upon players to examine themes such as patriotism, racism, workers’ rights, and class warfare. What’s even more interesting is that almost all of this story is told, not through cutscenes or forced conversations, but through Columbia itself. From the posters on the walls to the prerecorded messages players can find scattered in out of the way areas, players can uncover as much or as little of the story as they wish.

Of course, the history and ultimate fate of Columbia is simply the background noise. The true story of Bioshock Infinite focuses on Booker Dewitt and his mysterious objective, Elizabeth. As player reach her prison (built into the head of a giant gold angel; awesome), they discover that Elizabeth is much more than just some princess to be rescued. She has her own goals and ideals, and with her ability to tear holes in reality, she is a force to be reckoned with. Together with Dewitt, they set off to escape Columbia, which proves to be more difficult when your nanny is a thirty-foot tall mechanical bird-man. To go any further into the story would be a huge disservice to any readers, as you will want to experience this for yourself. Suffice it to say that Booker and Elizabeth are extremely well-crafted characters, and their gradual relationship will have players invested until the end of the credits. Thankfully, the ending has the same level of quality, and some of the revelations players discover will enhance the entire game, retroactively. 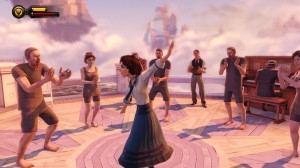 As the standard first-person control scheme would suggest, players will spend a great deal of time  shooting at people. All of the favorites are present and accounted for: pistols, rifles, machine guns, shotguns, and grenade launchers. While it is a little disappointing that weapon upgrades only come in the generic “increased ammo capacity, damage, reload speed, etc.,” the guns all feel very satisfying to use. This is fortunate, as players are only allowed to carry two at a time. This did lead to some frustrating moments for me toward the end of the game, when ammo becomes scarce in a few areas. Luckily, in those situations Bioshock has you covered. As in the previous Bioshock games, Infinite offsets its gunplay with special hand-based powers, in this case caused by the use of vigors. These abilities, governed by how full your magi… oops sorry, “salt” meter is, range from the expected (throwing fireballs, levitating enemies) to the bizarre (summoning a swarm of attack crows, grabbing enemies with water tentacles), and add a good bit of variety into the mix. Players are encouraged to experiment with different combinations of weapons and vigors, as some tactics are more effective against some enemies than others. Also adding to the mix is the Skyline, which is a series of rails that twist and turn around nearly every outdoor environment. While completely nonsensical from an engineering standpoint, these rails do allow players a great amount of mobility, allowing players to live out their Errol Flynn fantasies. Elizabeth also factors into combat, and not in the standard “protect the helpless maiden” variety (I’m looking at you, Ashley). She can eventually be called upon to summon things from other dimensions, like weapons, cover, and automated mechanical allies.

All of the variety in the world would be meaningless if the game didn’t make you take advantage of it. Luckily, the enemies in Bioshock Infinite will keep players on their toes. They have access to all of the same weapons as the players, and will not hesitate to launch grenades or missiles at any players who tries to stick to cover only (Come on, this isn’t Gears of War). In addition, they’ll often take advantage of the Skyline, circling around you when you least expect it. Just when you feel you’ve gotten the hang of these grunts, the big guns come out to play in the form of the Heavy Hitters. These monstrous enemies are much tougher, and often require special tactics to bring down. Of particular note is the Handy Man, who tower over players and leap around like crazed gorillas in an attempt to get at them. There isn’t really anything in the way of boss battles, however. In most cases, these encounters revolve around players having to deal with wave after wave of normal enemies before getting the opportunity to strike at the main opponent. This is hardly a deal breaker, though, as the variety of ways to approach combat kept me having fun for the entire length of the game. 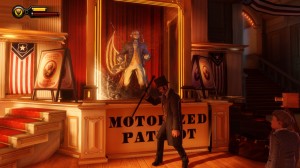 From a graphical standpoint, Bioshock Infinite is truly stunning. Columbia is a richly detailed world that truly feels alive, with a level of detail that is rarely seen in any medium. The art style is gorgeous, and the bright and vibrant color palette helps to perfectly accent the twisted beauty of this flying city. Its clear that the developers put a lot of effort into crafting the history of Columbia, and it shows through all of the little details. Enormous statues and monuments tower above players, and the streets are lined with shops, stands, banners, and flags. In the dark halls of a secretive order of crows, paintings line the walls, depicting the brave John Wilkes Booth striking down a demonic Abraham Lincoln. Even the enemies’ appearances tell a story, like the almost hall-of-presidents looking Motorized Patriots. That’s not to say that the player doesn’t have some cool looking stuff at their disposal, as well. The weapons have a  steam-punk vibe to them, and the vigors add some impressive variety. You’ll never forget the first time you lay down a nest trap, only to have a dozen crows explode out, clawing and pecking at the hapless enemy who triggered them.

Bioshock‘s sound design is equally as impressive. The thunder of firing weapons is very satisfying, as are the various effects that accompany your powers. I especially like the whinnying horse that accompanies every use of the Bucking Bronco vigor. Again, its the little things that really make the biggest impact. When journeying around Columbia for the first time, players will encounter a floating barge that is carrying a barbershop quartet. While completely optional, players have the choice to stick around and listen to their entire song before continuing onward. When fighting against Motorized Patriots, they’ll constantly spout off pre-recorded propaganda messages. The true star of the audio, though, is the voice work.  For the eleven or twelve hours it took me to play through Bioshock Infinite, I can’t think of a single instance of poor dialogue, be it from the main characters or random passers-by. The leading couple, Booker and Elizabeth, deserve special praise, as their conversations and banter always feel appropriate and genuine. Truly, the stellar voice work is one of the main reasons why Infinite‘s story succeeds so well, and will hopefully set the benchmark for future titles. 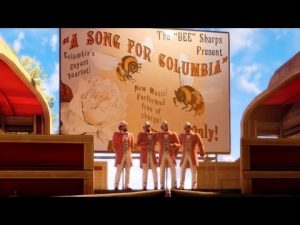 Overall, Bioshock Infinite is an amazing achievement. Every aspect of the story, from the writing and voice work to the artwork and level design, is superbly done. It is very rare that a game makes you so invested in its world and characters, and Infinite succeeds magnificently. The gameplay is also well-crafted, managing to offer a wide variety of options for each situation that is presented. It took its sweet time getting here, but Bioshock Infinite has proven that some games are worth the wait.