So far, the 3DS has played host to some of my favorite JRPG’s this console generation. In an attempt to join Atlus and Intelligent Systems on the handheld, Square Enix has gone back to its roots; back before every battle required more special effects then the average Michael Bay film and less player interaction than Heavy Rain. Bravely Default is a love letter to fans of the first six Final Fantasy titles and, well, all of the Dragon Quest games (hey, that series hasn’t changed much). Random encounters, overworld maps, and airships are all present and accounted for. However, does it manage to stand out from these influences, or is it a simple rehash of old ideas?

At the start of Bravely Default, Tiz, our plucky young protagonist, watches in horror as his peaceful farming village is tragically destroyed by the opening of a huge chasm. Upon awakening, he teams up with a soft-spoken girl with mysterious powers in order to fight off an evil empire and save the world from a mysterious threat. Really, the only way the opening could have been more cliche is if Tiz had amnesia as well. What’s that? The amnesiac joins the party next? Never mind, then. Much of the story should feel equally familiar to fans of the genre. However, the game plays on these well-worn expectations, as nothing is quite as simple as it at first seems. The brightly colored cities, cutesy art style, and sweeping score paint a very light-hearted tone, but digging a little deeper reveals some very dark moments. While spoiling them would be a disservice to players, I will say that I was struck by several moments while undertaking the side quests in Florem. The characters are also much more defined and endearing then they first appear. Similar to the Tales franchise, Bravely Default is full of optional skits, which help flesh out each party members personalities and quirks. While not necessary to complete the main quest, spending the time to unravel the back stories and relationships between characters made me feel that much more connected with them, and enriched the entire game as a whole. 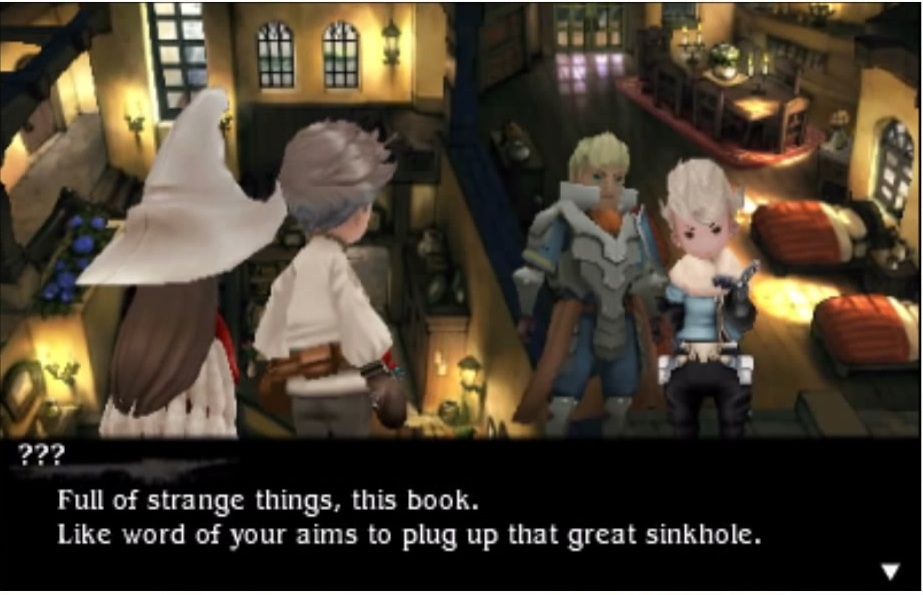 At its most basic level, Bravely Default is very similar to its 8-bit and 16-bit predecessors. Players will visit towns, explore dungeons, solve lever puzzles, and fight turn-based battles against a variety of enemies and bosses. However, there is a level of polish on the entire experience that really makes the game stand out. For example, players can participate in a mini game that has them rebuilding Tiz’s village in real time. By building different shops, players will unlock items, equipment, special moves, and components that they can use in the main game. In dungeons, there is always a save point before boss battles, and the Adventurer you save with also allows you to buy items you have unlocked with your village restoration, which means you’ll never be stuck at the bottom of a cave without any Phoenix Downs. Another example is how players who want to have a greater feeling of exploration can decide to remove destination markers from the map. One thing I really appreciated was how the game makers trolled us with the demo. That version felt very slow and tedious because of all the boring fetch quests that it required. Well, I’m happy to report that there are no such quests in the full game. Instead, every side quest is story-related, and ends in a boss battle. This makes each one feel much more important and interesting.

In the end, though, what really sets Bravely Default apart is choice; more specifically, choice relating to battles. Before even entering combat, there are a myriad of ways to adjust your play experience; difficulty can be changed at any time, you can decide whether or not to receive experience or money from battles (for some reason), and the encounter rate itself is on a slider, which ranges from easy grinding (+100%) to sightseeing (-100%) modes. Once in combat, players are presented even more options, in large part from the 24 different jobs that can be acquired through various side quests. These range from JRPG staples like Monk, Black Mage, and Summoner, to more unusual fair, like Spell Fencer, Salve-Maker, and Pirate. Each character can equip two different skill sets at a time, and further adding to the potential combinations are interchangeable Passive Skills. All of these things combine to give almost limitless ways to approach battles. Some of these jobs can seem almost overpowering at times (I defeated several bosses with Transience alone), but the real fun comes in figuring out how to complement abilities. By the end of Bravely Default, you will fight in a lot of battles, to the point where it sometimes seems like you’re just going in circles. However, by constantly experimenting with and leveling up Jobs, the same challenge can feel completely fresh and original each time. 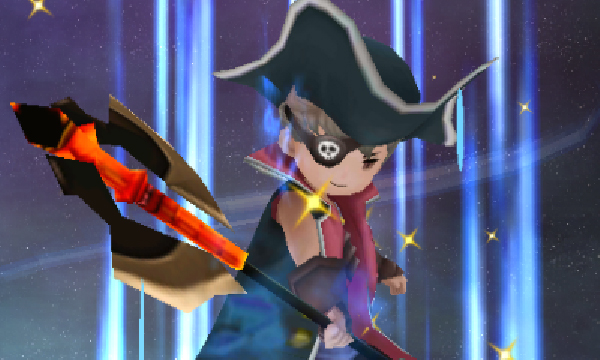 Which leads us to the game’s namesake: the Brave and Default actions. By selecting Default, the character enters a defensive state and saves up a Brave Point. On the next turn, that character can then select Brave and spend that point to act twice that turn. Ok, that’s great, I guess, but nothing particularly earth-shattering. However, the true strategy comes into play when you realize that the Brave counter can go negative. This means that, even on the very first turn of battle, your characters can act up to four times each. This turns random encounters into little strategy games, as defeating all of your foes in a single turn can earn you bonus rewards. The flip side of this is that, should you fail to finish off the enemy, your characters will be defenseless until their counters have reset. This mechanic is brilliant, and the risk/reward aspect it brings helps to both keep battles interesting and to speed things along. As you unlock and level up jobs, you will also come across abilities that require additional Brave points, and mastering the timing of their use just adds another layer of strategy to an already very full pie. If you aren’t sick to death of battle features yet, I would also just like to quickly mention the special moves. Each weapon type has its own special moves and are charged by fulfilling different requirements. Upon activating a special move, a song will begin playing that is unique to each character. While the song is playing, status effects are conveyed to the party, and activating a second special in this time frame keeps these effects in play while adding more. All of this encourages players to act quickly, in order to make the most out of these moments.

From a presentation standpoint, Bravely Default stands up to anything else on the 3DS. While not quite as technically impressive as full 3-D models and environments of Shin Megami Tensei IV, it has a consistency in style that Atlus’ game was lacking. Each character model is detailed and expressive, which is good, since the same models are used in the cutscenes, battles, and overworld maps. This means that, instead of having each of your characters look the same in every dialog scenes, a la SMT IV or Fire Emblem Awakening, they appear wearing their currently equipped job outfit. It’s a minor thing, but it just shows the amount of effort that went into the game. The 3-D effects in the game are serviceable for the most part, but not mandatory by any means. That being said, I felt it was used quite well during a few moments in the game where characters break the fourth wall and seem to address the player directly. In addition, there are a few special cutscenes that bookend the game, and I must say that the 3-D effects, combined with the motion controls, make for surprisingly powerful moments that I’ve never seen before in games. Bravely Default is equally impressive from an audio standpoint, with a soundtrack that ranks among my favorite ones of this generation. Of particular note is the main battle theme. Its hard to explain just how important the right music is to combat, but anyone who played Ni no Kuni can testify that poorly chosen (in that case, slow-building) songs can drag down the entire experience. Like “Flash” from Final Fantasy XIII, Bravely Default‘s battle theme is fast and extremely catchy, perfectly matching the often-times accelerated pace of the battles themselves. While I wasn’t too surprised that Square Enix was able to create a great soundtrack, what did impress me was how competent the voice acting was, especially with the main cast. To put it another way, the game offers players the option to switch to the Japanese voice track, but not once during the entire game did I feel like I needed or wanted to do so. If I ever do want to see the story scenes in the original language, though, the game gives you the option to rewatch any previously viewed scene. Man! Aren’t options great? 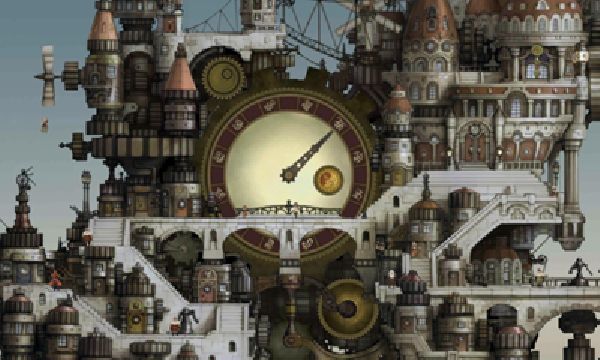 If you had asked me how long I would have expected to spend completing Bravely Default, I promise you that I would not have said 80 hours. However, when the credits ended, that’s what my play clock said. Now, I did spend quite a bit of time grinding in order to level up jobs and earn money, and I think that someone a bit more focused than me could easily finish the game in under 50. However, that’s still a lot of time, and the question needs to be asked: is Bravely Default worth your time? If you are a fan of JRPG’s, the answer is undoubtedly yes, and even for those of you who might be scared off by the cryptic story and density of an SMT game should give this a look. The game introduces you to new mechanics over time, so it is much more approachable to more casual players. Overall, Bravely Default is both a homage to the great games of the past and an example of how the genre still has room for innovation. I’m just glad that it made the trip over the Pacific, and I sincerely hope that Bravely Second follows suit.