Ubisoft Montreal is at it again, this time creating a fairytale wrought with rhyme, rhythm, meter and poise. Wait, you mean the guys that also made the animal-skinning, heavily-violent, open-world Far Cry 3? Do they even understand how to write a fairytale? Are there tigers to hunt and mercenaries to kill?

Before questions are answered, first we need exposition. Set in Austria, 1895, the game centers on Aurora, the daughter of a Duke. One night, Aurora comes down with a suspicious illness while she sleeps, and her body becomes colder and colder. When she wakes, Aurora finds herself in Lemuria, where the adventure takes place. Aurora discovers Lemuria has been robbed of their moon, sun, and stars by the Dark Queen, so she sets out to retrieve them and return to her father. Accompanying Aurora, Igniculus, a glowing blue firefly, helps throughout the journey acting as a guardian angel-type character who can either be controlled with the right thumbstick, or a second player may jump in and control the little blue fireball. Together, Aurora and Ignacius — along with the help of a few interesting characters — make their way through the land of Lemuria and, true to the fairytale form, learn a valuable lesson or two.

Yes, the guys who brought you the gruesome and awesome Far Cry 3 are the fellas who have brought the beautiful water color tale to life. Similar to how Naughty Dog reminded us that they are one of the best gaming developers with The Last of Us, Ubisoft Montreal reminds us in an equally poignant and sobering fashion that they are one of the greats, as they are able to move gracefully from the hyper-violent world of FC3 to the subtle and simply gorgeous environments that burst with life and desolation in Child of Light. 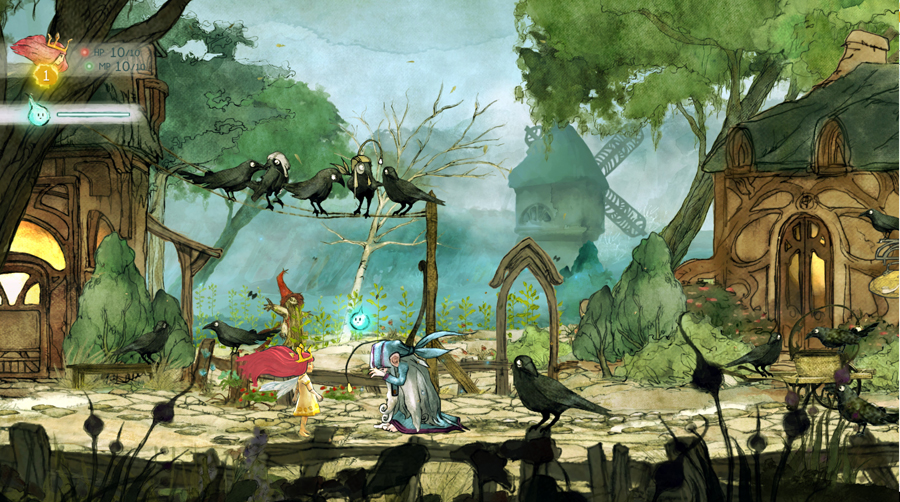 The visuals are stunning; there is little-to-no argument there. Each water color environment is unique, which makes discovering and exploring new areas exciting every time. Open plains, dark forests, even the usual drab cave areas pulse with an eloquence that feels so vivid. As you travel through Lemuria, the environments transition seamlessly without pause, producing an aesthetic of being painted as you move. What sets the graphics apart, though, aside from the water color style, is the game’s ability to juxtapose liveliness and loneliness. Entering the towns, and traveling the not so populated landscapes in between cities, there is always a notion of breath and bustling. When the noise of the inhabitants subsides, and you are searching for the next objective in a place you’ve never been to before, what is left are the beautiful structures, yet they are unfamiliar, all the while you search for your father, alone from the rest of the world. The graphics and visuals capture the dichotomy between life and lonely tremendously as each location is so different it is difficult not to be overwhelmed and separate from the surroundings. There is a communication between the world and Aurora, taunting her as she continues her search. The world is jaw-dropping and alive, but it is not Aurora’s home, and the notion of a child alone looking for her father is resounding.

To keep Aurora company and save her from becoming too lonely are a cast of interesting characters that join your party. They are all strange, fun, diverse, and fully realized. Every character has a memorable personality that separates them from the rest, keeping you invested in the lives of the characters. Despite their obvious utility as mechanisms to keep the story moving forward, they offer various levels of strategy and dynamics to combat. 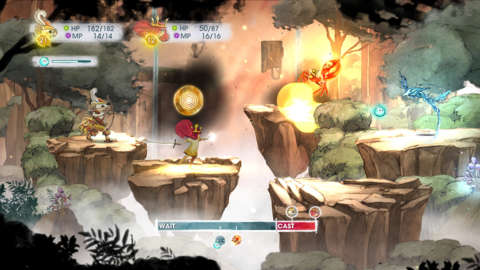 When fighting enemies, you are allowed a maximum of two party members on the field against two or three enemies. The combat itself is reminiscent of classic JRPG turn based systems with it’s own pep. At the start of every battle, a meter on the bottom is divided into three sections to show your cool down period (the gray half of the bar), your time to choose an attack or defense technique (white bar), and attack, when your character executes the skill or tactic you chose (red bar). Your party members and enemies essentially form a queue on the bar, showing when you and your enemy will attack. Of course, the game offers a series of potions and skills to either quicken your progress through the queue and beat your enemy to the punch (literally), slow your enemy, or paralyze them, stopping their progress in the queue completely for a few seconds. Thankfully the combat offers plenty of challenge, which is where switching between party members comes in handy. Some enemies are weaker to certain attack types like electric or light damage, while other enemies rely on armor to expend extra resources and and speed buffs to beat you on the queue, leaving it up to you which characters to play to exploit an enemy’s weakness. Every battle, especially the boss battles, emphasizes strategy which makes the combat varied and prevented boredom from spamming the same attack or using the same two characters. The battles felt crisp and satisfying, maintaining a good balance throughout the game in terms of difficulty as it did not increase or decrease drastically. There were times when I would get frustrated because I found it strange that I was only able to use two of my party members and not three to even the odds, but they were few and far between, and once you figure out a proper strategy, your two party members equal the enemy’s three easily.

There is argument to be made that the game could be too easy because early on, Aurora is given wings which allow you to zip around the environments quickly, and if you choose to, avoid every enemy. Ubisoft Montreal solves that problem simply — if you move around all enemies instead of fighting and leveling, you will get your ass handed to you. The game is homage to JRPGs, and you have to level grind just as you would in them. Also, because of the fluid locomotion the game presents with the wings, it is easy to sneak up on enemies, giving you an advantage during combat. The necessity of level grinding has no effect on the story at all, it is simply a strong suggestion to make life easier when fighting enemies. Plus fighting enemies is fun; why would you play an action-adventure/JRPG if you had no intention of fighting? 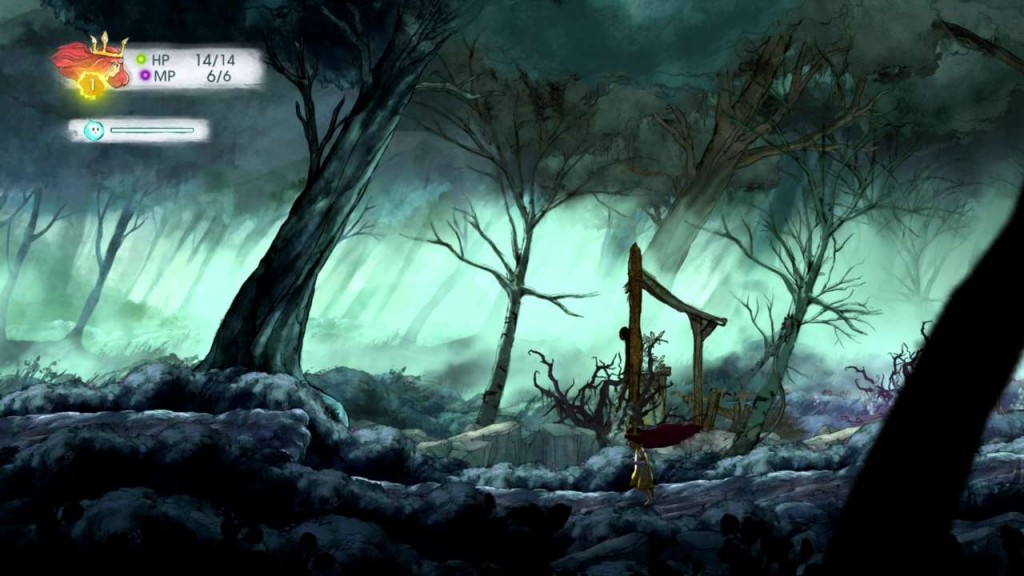 During your time in Lemuria, following your footsteps and wing flaps is a moving score that heightens the level of emotionalism to a point where it is almost unfair. The music sifts through the game as if you were being tucked into bed. Always delicate (save for when you are in battle), never coarse, there really is no other way to put it except that the score is damn good. The notes on the piano are coupled by a string section that will make your heart weep, enveloped by a backdrop of wind solemnly blowing almost as though it does not want to be noticed. It is a triumph when you are able to say that the sound alone is reason enough to play this game. When you enter the towns, the music changes from somber and pensive to optimistic and soulful. When you enter a cave off the main path the music becomes sparse, almost non-existent. Additionally, the sounds of combat and otherwise are just as elegant as the game itself.

Child of Light is an important reminder to the gaming community that Ubisoft is one of the best developers, home to some truly brilliant and creative minds. Every so often we play a game that leaves such a lasting impression that when we describe the experience to friends, we are able to conjure exactly what we felt at the time and relive the joy we had playing the game all over again just by words. What this game has accomplished without blood, heavy-handed violence, swear words, sexual imagery, or drug references is something most games with those elements wish they could do, but fall short. Child of Light is a mature, smart, and lasting video game that sticks with you long after your first play through.