With the abundance of AAA titles on the market today, it’s easy to forget that video games are, without a doubt, a form of art. While it’s easy and certainly entertaining to get caught up in the stunning graphics and insatiable bloodlust that permeate a lot of the popular titles, there’s much comfort to be found in retro-style games.  ClaDun x2 offers an undeniable throwback charm that will make nostalgia pump through your veins. This hack-and-slash RPG dungeon crawler shows how you don’t need a monstrous budget to create an enjoyable experience.

ClaDun x2 is set in the mysterious realm of Arcanus Cella. Initially this island seems like a paradise, so it’s shocking to learn that this beautiful world is actually a prison. All of its inhabitants have committed a crime, but nobody has any recollection of what they did. For an island full for criminals, you certainly meet a lot of friendly people. From characters such as the masochistic, self-deprecating Lamb to the sinister yet sometimes helpful dog Widder (yes, this dog can talk to humans!), it’s interesting to see how relationships progress throughout the game. There is said to be no escape from Arcanus Cella, but if somebody tells you this at the start of a video game, you have every right to be skeptical. 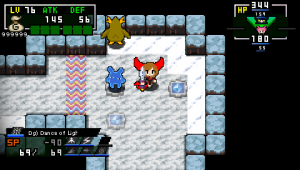 Before you even enter a dungeon, there are a handful of options when it comes to character customization. Initially there are around ten classes to choose from, and as you progress through the story even more types will be unlocked. The warrior is the most standard class and great for beginners because it doesn’t take a whole lot of finesse to swing your sword at anything that looks at you wrong. Wizards and rangers are strong for ranged attacks, but because your enemies are constantly moving it takes some practice before landing distant shots becomes second nature.  Each class type has its own unique set of abilities as well. Unlockable classes don’t play significantly different from the originally available classes, but there is enough differentiation to make checking them out worthwhile. For example, the Dragoon class seems a lot like a Warrior at first, but this class is much less dependent on abilities and more reliant on raw power. As such, the builds you create will differ significantly and your combat tactics will have to adjust accordingly.

Early on there wasn’t too much differentiation between characters, but once enough abilities are unlocked and you possess enough magic power, things really start to pick up. The entire character progression system revolves around the Magic Circle system. Essentially, the character in the center is your main hero that you will control, but sub-characters can be placed around him to act as a shield and provide power-up benefits. Unlike the sub-characters, your main hero is the only person that will notice a substantial increase in mana (which is necessary to equip all stat boosting artifacts). However, mana is most important for a sub-character in your group. As a result, you constantly have to switch your sub-characters into main heroes in order to increase their mana capacity, which in turn will make them much more efficient for support. All characters will learn new abilities and magic circle layouts as they level up, so the possibilities for customization are seemingly infinite. 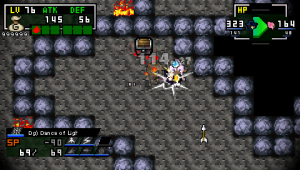 Power-ups come in the form of artifacts, which can be placed adjacent to a sub-character provided they have enough mana to hold it. For each character, there are many different layouts that you can use for your magic circle, each of which caters to a certain play type. For example, a warrior can choose one layout that favors high attack power but offers little defense, while another build is more tank friendly. The amount of customization may be a turnoff for some because it takes a lot of trial and error if you’re really concerned with maximizing, but at the same time it’s very rewarding when you finally put together a powerful setup.

The core of the game takes place in various dungeons where your goal is simply to make your way through the exit. Each stage isn’t simply walking from point A to point B though; instead, you’ll often need to slay a strong enemy or navigate your way through a puzzle to reach the end.  The dungeons are set in environments including deserts, catacombs, and even an arctic level with ferocious, belly-sliding penguins. There are times when the progression can seem formulaic, but if you take the time to enjoy each level instead of rushing your way through it, you’ll find that there’s more than meets the eye. For example, in one boss fight you can rush yourself to the arena and engage in a gladiator-style duel. However, if you pay attention to your surroundings you will see that you can open up gates that will release other enemies to help weaken him. Utilizing enemies to attack other enemies is a particular fun tactic to see play out. 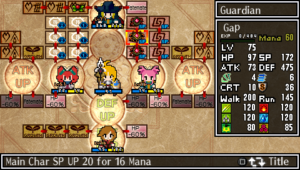 Not all enemies are the same, and if you treat them as such you will likely get destroyed at one point or another. While everyone can enjoy a sprint through the dungeons, sometimes it is vital to slow down and put up your shield in order to set yourself up for a strong counter-attack.  As you dart across the 2D levels, you need to keep your eyes peeled for traps. If you accidentally step on the wrong panel, an arrow might shoot at you or a land mine may even go off. Luckily, our hero has the ability to dash out of the way and jump over hazards. The tutorial stages in this game don’t do a great job of explaining all of the controls and options, unfortunately. The in-game encyclopedia offers information about everything, but it’s merely a text-based interface that is boring to flip through. Randomly experimenting with the controls is enough to get you started, but a more hands-on tutorial would’ve been great.

In addition, at times this game can feel like a long grind-fest. It’s near-impossible to make your way through every stage in succession because you won’t level up fast enough. It helps to replay stages with different characters so that your party can get stronger and you can find better items, which makes the later levels much more tolerable. The built in random dungeon generator doesn’t do much to combat the monotony either. The whole purpose of this tool is merely to find better gear, but you won’t find yourself coming back to this mode too often due to the lack of diversity between stages.

In terms of presentation, the developers clearly weren’t afraid to break away from the norm. For background music, you have the option to select between orchestrated pieces and 8-bit style beats. The retro beats fit well given the throwback visual style, but the instrumental numbers really stand out. It’s not too often that you’re given the opportunity to slay your way through dungeons while listening to swanky songs featuring jazz ensembles, pianos, and an overall thoughtfully comprised score. 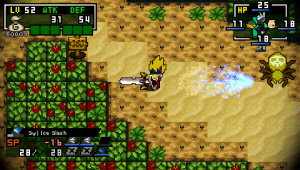 Likewise, the visual style makes it very clear that you don’t need to utilize the latest and greatest technology in order to make a great looking game. Even though the old-school style here looks like it would run fine on an old Super Nintendo system, the vibrant colors and use of color schemes add an incredible amount of character. Wandering around the island of Arcanus Cella will make you feel like you’re in paradise, and similarly exploring the bottom floors of catacombs will make you wary of the undead.

Even with its highs and lows, as a whole, the experience offered in ClaDun x2 is worth checking out. Gamers familiar with the first installment (see the review here) will find that a whole lot hasn’t changed since the original, but newcomers to the series will find it easy to spend countless hours here. Whether you have five minutes or five hours to play, this game is perfect for a handheld like the PSP. If you’re finding yourself getting tired of the same generic AAA titles, then ClaDun x2 is the perfect title to refresh your gaming palette.

Disclosure: This game was screened using a review copy sent from NIS America.