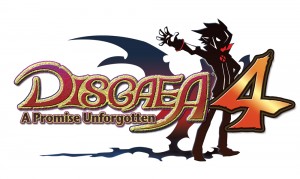 Disgaea 4 is the latest in the line of Prinny-throwing, humor-laden tactical RPGs made by Nippon Ichi Software and published by NIS America. The story centers around Valvatorez, a vampire who was once known as The Tyrant. One day, he met a nurse who, though he was one of the strongest demons in the Netherworld, showed no fear. He promised her that he would not drink human blood again until he successfully put fear into her. Unfortunately, she died before he could scare her, and true to his word, he refused to drink human blood ever again. Being a vampire, he lost much of his power as a result, and what power he retained, he sustained by eating sardines, which became an obsession for him.

This game has by far the most political storyline of any Disgaea title. Valvatorez’s servant Fenreich has clear political aspirations for his boss, hoping he will regain his lost power and claim the title of Netherworld President, but of course there has to be at least some conflict or there’s not a game to be played. Along the way, the party encounters various levels of authority that they must overcome starting with the warden of the prison where Valvatorez works, through the current President himself and beyond. The protagonists also have to deal with other facets of politics, including an information bureau whose job is to manipulate information about the Netherworld and keep all the citizens dumb and happy. When you create new characters, the game introduces them as “senators” and gives them a short introduction scene where they make their case for election, Netherworld-style. Even though the game does touch on quite a bit of political fare (such as a slime that yells “Yes, we can!” who gets referred to as “Gel Obama”), it does so in a way that is humorous enough that its hard to take offense, no matter your political stance.

Intertwined with the political posturing are a few different side stories with the major one being the story between Valvatorez and the human nurse that he once met. Many of the other supporting characters have their own subplot as well that help keep the story from getting too bogged down and monotonous: there’s Fuka, the dead girl who thinks she’s just dreaming, and her aspirations to take over Earth; Emizel, the President’s son who is given the role of the reaper, who wants to earn his father’s respect; and Desco, the engineered super-weapon whose goal is to become the final boss of a game someday, which would make her arguably the most adorable final boss in the history of games (if you can ignore the tentacles that sprout from her back). The other characters definitely liven up the game, though Fuka’s “it’s only my dream” schtick does get a little tiresome by the end. Along with the story characters, there are a variety of melee, ranged and magical human classes that can be created as well as quite a few monster classes. Many of the classes and monsters seen in Disgaea 4 have been seen in previous titles, but with some of the alterations to the battle system, it may make you rethink just how to build your party.

Like its predecessors, Disgaea 4 is a turn-based tactical RPG. There are basically three ways time is spent during the game: fighting on the grid-based battlefields, listening to the conversational interludes between story battles and running around your home base and campaign room prepping for the aforementioned battles. As you progress through the game, you’ll gain access to a few different battle areas: the dimensional gate where story battles take place, the Item World where you can spend hours upon hours powering up your equipment to ridiculous levels, the Character world where you battle to bestow improved stats and new abilities on your characters and eventually the X-Dimension, where all the previous areas can be accessed like normal, but the enemies you encounter are super-powered. This comes in handy in the post-game when you are trying to power-level characters quickly. 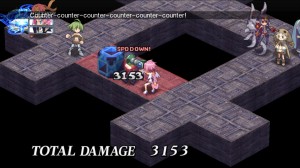 Once battle starts, if you’ve played a Disgaea game before, you’ll feel right at home. The same player turn-enemy turn system is in place and you still have a maximum of 10 characters deployed per map. You’ll once again encounter the Geo Symbols, a system of colored panels and boxes that can force you to change your strategy at times. The symbols affect who is ever standing on a given color and can do anything from make them invincible, double their attack power, or make them die in one hit. They can also be destroyed to change the color of the panels on the ground, and when done in the right order, they can cause a chain reaction that does significant damage to enemies on the map and give you a nice bonus at the end of battle. One new addition to the game is the Fusion skill. This allows two of your monster characters to join together, which increases their states, shares some of their abilities and makes them huge. After fusing, they take up 5 grid squares, which limits where they can stand, but when they move, they can knock other characters out of the way, which can be used to make enemies stand close together for area of effect attacks.

The story battles have fixed setups that can be replayed over and over again, so if you find one that you can finish quickly, it can help you grind levels without wasting too much time. The Item and Character worlds, however, are randomly generated maps where just about anything goes within reason. The major limitations are based on the person or item you enter, which determines the level range of the enemies you see. As you fight deeper and deeper into the Item World, the chosen piece of equipment will gain levels, increasing the stats it gives to its wearer. If you want to beat the final optional bosses of the game, you’ll be spending a lot of time grinding up your equipment as well as your characters.

At the base, you can shop for new equipment, heal, talk to the Prinnies and prisoners that reside there, access the various worlds for battle, and go to your “Cam-pain” headquarters. The headquarters acts much like the classroom in Disgaea 3 with a few new additions. Each square on the map must be accessed by beating a story battle; so, every time you beat a new map, your available party space goes up by one. This is also the area where you can place Evil Symbols, which function like the school clubs from Disgaea 3 except that membership is based on where a character stands in relation to the symbol. The Evil Symbols grant a variety of advantages ranging from sharing experience points between members to allowing your monster characters to fuse together before “magichanging” – turning into a weapon that can be used by one of the other characters. Some of the Evil Symbols will unlock with the story, but some of the better ones have requirements to unlock them, so you’ll have to either break out a FAQ or experiment in battle to get them all. The Cam-pain headquarters is also where you create and reincarnate characters and try to pass bills in the Evil Senate, just like previous Disgaea titles. 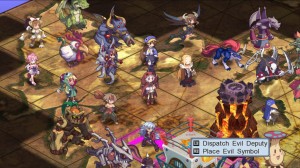 Along with the aforementioned additions and changes, Disgaea 4 is also the first title in the series to have a customizable map system. You can build your own maps using basic pieces, add enemies and upload them for other people to play. By playing the online maps, you can unlock more pieces to build more intricate maps yourself. Map sharing isn’t the only online function in Disgaea 4; you can also select a character to go to other player’s senates and vote on their bills. Your senator can be bribed just like the ones controlled by the game; so, if you’re lucky, you can get some free stuff even when you’re offline. While these options are nice ideas, they are somewhat forgettable unless you’re a hardcore player.

This game features some nice graphical updates over the previous titles. The pixel-based sprites have been replaced with smooth, well-drawn characters, but if you really love sprites, you can change the settings to display the characters in all their pixellated glory. The backgrounds and level settings do feel a little repetitive at times; however, there are at least more random items that appear on the maps (boxes, statues, giant mushrooms) to provide a little variety to the visuals so at least it’s not exactly the same. During dialogues, the character portraits are partially animated, each has a few motions that they display during conversation. It’s a nice way to break up the visual monotony of long conversations, but don’t expect them to make or break the game for you.

Tenpei Sato reprises his role as the soundtrack composer for Disgaea 4, and if you’ve enjoyed the previous titles’ music, you’ll enjoy this one too. There’s a variety of music that comes up, but most of it has its roots in a mixture of pop and rock influences. Even though it is clearly a Disgaea  soundtrack, it is still perhaps the best and most varied of soundtracks in the series. The voice acting, while not always as great as the music, certainly gets the job done. The game offers both English and Japanese voices in dialogue and battle; so, you can pick your favorite. You can also select one of three personality types when you create a new character, which gives you some variety of what they sound like in battle. The option certainly helps keep you from hearing the same thing over and over again if you’re prone to using a limited set of character types.

If you’re not familiar with tactical RPGs, Disgaea 4 is simple enough in its gameplay that you can learn as you go, but it has enough options to provide hundreds of hours of gameplay for those who truly love the genre, too. Most Disgaea series fans will enjoy this title for its ability to carry on the tradition of the series while adding a few twists. While the series could stand to try and experiment a little more with the gameplay, it’s hard to argue with enjoyment and success.