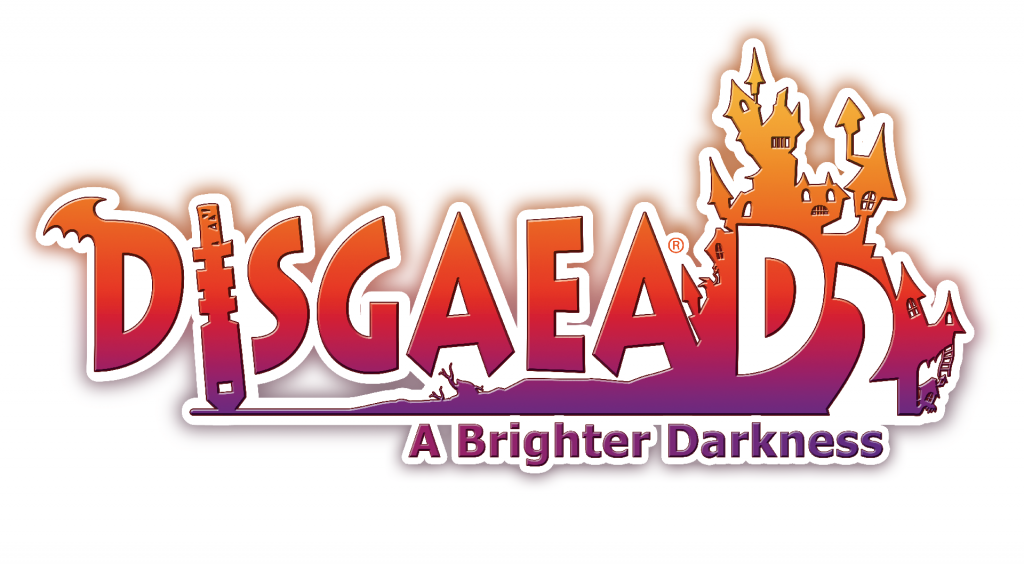 It’s been ten years since Disgaea: Hour of Darkness first graced PS2s across North America. Since then, three sequels (plus platformer and visual novel spinoffs) have come and gone, but no main series title since the original has starred Laharl, Etna and Flonne. While they’ve shown up as side characters in the other games, and each sequel has offered some nice gameplay innnovations, none of them quite matched the all-around great experience of the first. With the trio once again taking point in Disgaea D2: A Brighter Darkness, can Nippon Ichi recapture the magic of the Netherworld once more?

And really, Disgaea D2 is all about magic: the story revolves around the magical energy of the Netherworld going awry. After claiming the right to succeed as Overlord from his father in the original Disgaea, Laharl opens Disgaea D2 on a mission to get all citizens of the Netherworld to acknowledge him. One day, though, Laharl finds a white flower native to Celestia growing in his castle garden and later learns that these flowers are spreading throughout his lands. Since the Netherworld doesn’t offer the hospitable climate of the heavenly Celestia, he and his vassals are forced to investigate how and why Celestia is encroaching upon his realm. When he encounters a young angel named Sicily who claims to be his little sister, plus several other angels wandering throughout his world, Laharl and his minions find themselves tied up in a struggle that could bring his kingdom to its knees, or even wipe it from existence. 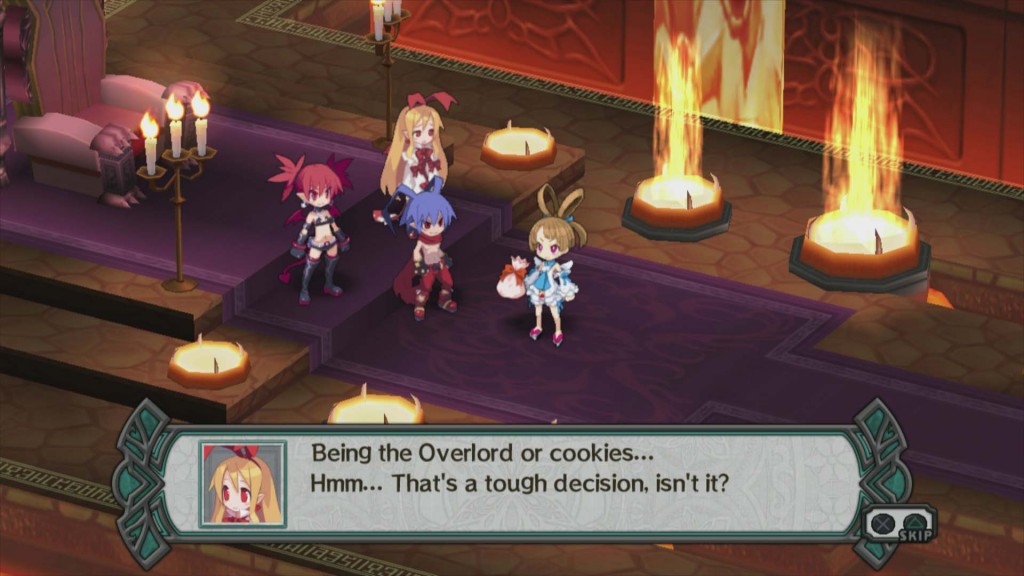 While the game offers a brief primer of the events from the original Disgaea, playing that first game will definitely help you understand the characters better, as this one relies on a bit of background, especially if you want to get all the jokes. Even if you don’t take the time to play through the first story, though, there is still enough information to keep Disgaea D2 coherent. The story also has all the satire and humor that veterans of the series have come to expect, whether the dialogue pokes fun at the characters themselves or the tropes that pervade modern entertainment. The voices for Etna, Flonne and Laharl return from their cameos in recent games, doing a good job selling the jokes and sarcasm. At times, though, Laharl’s English voice sounds a little flat, his alternate voice even more so. Still, the story and the dialogue are arguably the best in the series.

The gameplay of Disgaea D2 streamlines and improves upon the advancements of previous games. The addition of the Cheat Shop allows for quick and easy adjustment of enemy levels, access to the Land of Carnage in post-game, and tweaking of the rewards and experience from battle without taking these items up for a vote in the Assembly. The Assembly itself also received an overhaul, and now if a bill doesn’t pass by vote, the Senate can be paid off to pass the bill as an alternative to just beating sense into the representatives. Teaching abilities also goes smoother, as any character can be made an apprentice of another, allowing the transfer of spells and attacks once they have been used a few times in battle. The other major addition is the Demon Dojo, where characters can be trained to receive bonuses to various attributes at level up. While this might upset the hardcore contingent who could see it as making the game too easy, the reality is that it’s simply shaving hours off of the repetitive micromaintenance aspects of the series, letting gamers get back to slamming enemies for millions (or billions) of damage instead. 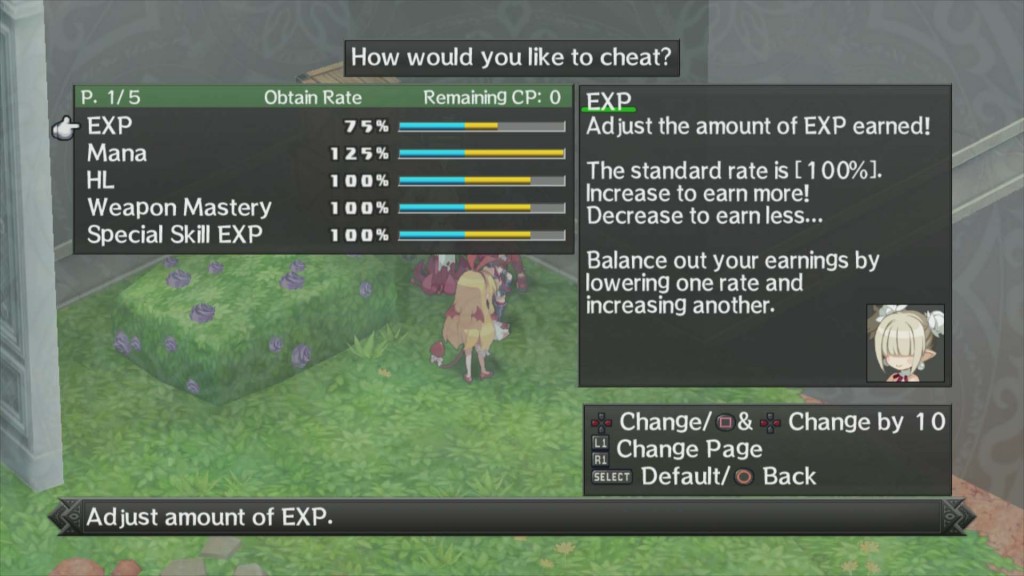 The battles themselves are relatively unchanged, fought on alternating turns and a gridded field. That’s a good thing because the Disgaea formula for tactical RPGs has always been strong and hasn’t really needed much change. There are around 40 different human and monster classes to choose from to flesh out your team, unlocked as the game progresses, plus a handful of other story characters that join along the way. Weapon-based skills are learned as weapon types are used (or through the aforementioned apprentice system), and yes, for the power-levelers, the cap is still level 9999. The Item World still exists, too, offering hundreds of hours of diving into randomly-generated dungeons to create ridiculously overpowered weapons. The biggest change to the gameplay itself is that the Magichange and Monster Fusion abilities have been scrapped, instead being replaced by monster mounts. Now humanoid characters can hop on the back of any monster, gaining stat bonuses and attacks like Magichange offered, without having to kill off the monster to do it.

Disgaea D2 uses high-res anime-style sprites like its predecessors. While the graphics budget for the series will never break the bank, it still looks good. The cartoony style hits every corner of the color pallet, and the attack animations are bright and flashy. Much like the jokes in the dialogue, the overblown attacks are well-executed satire, another series staple. All of these aspects come together to make Disgaea D2 a great comedic experience, not just a game valued for its strong, tactical gameplay. 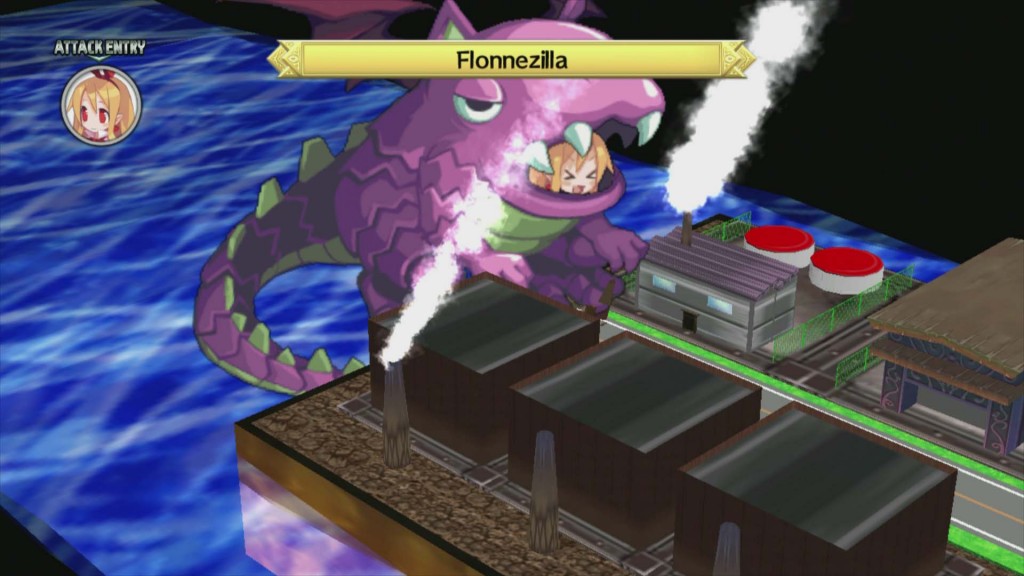 Disgaea D2 is the game that fans of the original have been waiting on for a decade, and with all of the character reincarnation, item world hopping, and several endings to investigate (bad or good), the game offers hundreds of hours for the completionist. If it’s not the best game in the series, it’s close enough to make any tactical RPG fan happy, and the streamlining gives newcomers a great chance to jump in and learn the series’ mechanics.