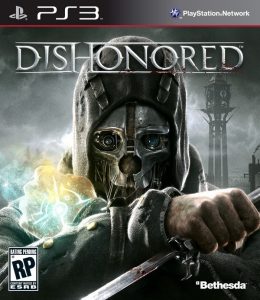 In the gaming world, choice is probably the most ambiguous word you can encounter. For some players, choice means partaking in decisions and actions that shape the way they experience their game, which is undoubtedly Bioware’s field of expertise. For some others, choice is having the option of decimating foes with a large variety of weapons and powers, and Randy Pitchford is doing more than his bit satisfying such players with Borderlands. However, there are others for whom choice is defined as having the proper toolset and being able to carve their own path, no matter how abstract, through the restricted world. For such players, Dishonored comes as a breath of much-needed fresh air. Dishonored gives you the choice to be a master of stealth or an agent of carnage, and either way, it is an absolute blast to play.

Dishonored tells an interesting tale of deceit and revenge, set in the fictional town of Dunwall. It charts the life and times of Corvo Attano, protector of the Empress of Dunwall. He pays the price for his truthful loyalty by being framed by the corrupt, power-hungry Spymaster for The Empress’ murder and the abduction of her daughter Emily. With all hope gone and nothing left to lose, Corvo swears to exact revenge on those who wronged him. Opportunity knocks on the door when a group of people, calling themselves the Loyalists, help him in escaping the prison. Following that, Corvo methodically sets out on one quest after the other to cripple the Lord Regent Spymaster’s tyranny and restore peace to Dunwall. Even as this deep-rooted conspiracy unfolds, Dunwall itself is in a bad shape as it becomes Plague-stricken, with rats breeding in every corner of the city and people dying by the numbers.

Dunwall really is an interesting choice for a landscape. The city carries a weird mixture of the grandness of Imperial London, while at the same time resembling the tattered ruins of a Steampunk city, a Whale-oil driven one at that. A Whalepunk city, if you will. Guards roam around the well-lit pathways, while the darker nooks and crannies are populated by the deprived inhabitants of Dunwall, along with the plague-stricken, zombie-like populace. It’s a hostile environment to say the least, yet it feels like it is more alive than any other game world I have seen this year, and possibly ever.

What really sets apart Dishonored is the absolutely done-to-perfection gameplay. Early on, you are granted supernatural powers thanks to a mysterious figure called The Outsider. These powers range from Blink, a short distance teleportation ability, to Possession, which lets you possess animals and even humans in its upgraded form. If these defensive powers aren’t more your thing, then perhaps the ability to summon a rat swarm, which literally reduces your foes to little chunks of meat will appease your violent sensibilities. Whatever you choose, Dishonored provides you ample amount of tools to tackle missions the way you like. These powers consume mana, which can be replenished using potions. In addition to powers, you also get a wide variety of weapons, from swords to crossbows, grenades to spring razors to dispatch your foes.

This is where the difference in play styles really comes forth. I chose to upgrade Blink, Dark Vision (which lets you see through walls, track enemy movements and so on), as well as Possession to let me slip in without calling for much attention, along with Shadow Kill which turns enemies to ashes once killed, keeping from you being detected. But at the same time, Windblast and the wide array of weapons kept me amply prepared in case of an enemy encounter. The path you take might widely differ from mine. You can do insane amounts of damage, leave a trail of bodies and upgrade the more radical abilities, or like me, you can walk the fine line and play balanced.

Missions often have branching pathways, letting you get to the objective and complete it the way you want. For example, in one of the later missions, you are tasked with infiltrating a mansion and eliminating two targets. Now, you can either kill them outright, or knock them unconscious and carry them to a ship, or take an entirely different route, by completing a couple of side missions for one of the NPCs, and let him do the dirty work instead. This highlights the availability of choice, and the abundance of discoverable areas and side missions.

Even though you can cause complete chaos, this entails a darker and more difficult game. You see, as you kill more enemies, it will breed more rats, which in turn breeds more Plague victims called Weepers, making it difficult to roam the streets without walking into a bunch of rats or Weepers every other turn. It is a really interesting mechanic, promoting a cleaner play style without completely disabling the option to slit throats.

Collectibles form another major part of Dishonored. Collectibles come in the form of Runes and Bone Charms scattered all over Dunwall. Runes let you upgrade your main supernatural abilites, while Bone Charms confer additional bonuses such as resistance to damage, carrying more grenades and so on. Additional notes, letters and audiograph cards reveal more information about the world and its history, which is rather fascinating and well worth the extra effort. There are coins and potions scattered as well, which are a little difficult to collect since doing so will need you to explore probably every square inch of the respective mission’s map. Regardless, there is no dearth of incentive for you to go the extra mile and that is something you don’t see a lot these days.

Visually, Dishonored is an absolute delight to watch. The graphics in Dishonored are something you need to see to believe. The characters, the environment, possibly everything carry the looks and shades of an oil painting, which becomes all the more evident when you stand still and simply gaze at its astounding beauty. Artistically, Dishonored is one of the best this year.

Dishonored sounds just as good as it looks. There is some amazing voice acting at play here. From acting veterans like Susan Sarandon, Brad Dourif, Carrie Fisher, and Lena Headey (of ‘300’ fame), to the young and dynamic Chloe Grace Moretz, the voice acting is brilliant. It helps, since there are a large number of dark, wacky and twisted characters in the game, all of them a joy to watch and interact with. The background score is subtle almost all the time, letting you soak in the bleak atmosphere and decaying state of the humanity, elevating only when you get discovered and a fight ensues. Some subtle sound effects also abound, accompanying various contextual actions, and overall it is nothing short of brilliant.

As surprising as it may sound after reading 1300 words, it is hard to describe just how ingenious and brilliant Dishonored really is. From its pitch-perfect gameplay to its crazy inhabitants, the beautiful visuals to the voice acting, Dishonored is polished and eminently replayable without ever being repetitive. If you crave choice, the ability to carve your own path, and get madly entertained all along the while, you can’t go wrong with Dishonored.