Ninja Theory has proven its ability to create enticing action titles with deep combat and refined storytelling. Enslaved told a beautifully emotional story, while not compromising on the action front. But expectations are at an all time high with Capcom 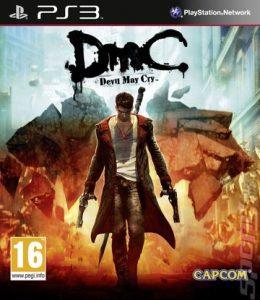 handing over the reins of the smart-as-a-whip, Demon-killer-centric franchise Devil May Cry to Ninja Theory. Admittedly, fans were more than a little enraged over the decision to reboot it, and the minor changes to Dante’s looks only added to their discontentment. However, after playing through the campaign twice, I can safely say that DmC : Devil May Cry is an excellent game that does complete justice to its predecessors, while maintaining and, dare I say, improving upon the fluid, frantic combat and extensive combo creation.

DmC tells the tale of Dante, the demon exterminator and womanizer with perfectly cropped black hair. Things turn around when he is contacted by an organization called The Order, rebelling against the demon controlled territories of the real world. Dante suddenly becomes the centerpiece of the power conflict between angels and demons with little knowledge as to why; that is, until his past is laid bare in front of him. He discovers he is Nephilim, part demon and part angel, and the only kind with the ability to slay a demon king. When Dante recovers the memories of his lost childhood and  remembers his angel mother’s murder and demon father’s exile by an all powerful and controlling demon named Mundus, he joins forces with his brother Vergil and a psychic medium Kat to take down Mundus once and for all.

Ninja Theory once again delivers a hard-hitting, excellently-woven tale of revenge and redemption. While Dante’s initial portrayal as a womanizing, drunk slob may be off-putting to the hardcore fans, his character progresses in a relatable and human manner which compensates for it. Learning about his troubled past makes him rethink his careless approach to life and clean up his act. Reuniting with his brother, both of them sharing a complex relationship rooted in a troubled past, and developing an emotional bond both with him and Kat moulds him into the hardened, cool-headed, yet rage-fueled brawler we all know and love. Being a foul-mouthed smart-ass only makes him all the more lovable.

The combat in DmC is absolutely brilliant. It starts out simple enough, with Dante’s sword Rebellion and his trusted handguns Ebony and Ivory in the picture, having you string together varying attacks to build up high scoring combos. Things get really interesting when more weapons are introduced into the mix. Dante’s demon and angel affiliation grants him additional demon and angel weapons. The demon axe Arbiter lets you land heavy and powerful but slow attacks, while the angel scythe Osiris is used for crowd control, delivering quick and wide-sweeping attacks. More additions come in the form of the demon pull and angel lift moves, letting you pull enemies closer or grapple to them respectively. These further add to the enjoyable complexity of the fights, enabling you to build up elaborate, continuous combos with different weapon attacks. By the end, you will have nearly 10 different weapons. Having such an extensive arsenal ensures that the combat never gets repetitive, and the ability to switch weapons on the fly using the shoulder buttons and directional keys keeps it fluid. There is no limit to the number of perfectly executed combos you can create and achieve the desirable SSS ‘Sensational’ combat rating.

Another interesting gameplay element is the Devil Trigger mode. Attacking enemies fills up the devil meter, which when full can be used to activate the Devil Trigger mode. Doing so momentarily suspends all enemies in the air, rendering them easy targets for Dante’s unforgiving attacks. While in this mode, Dante also recovers health, so a careful and planned use of this mode is essential as filling up the meter can take a long time if wasted.

The enjoyable combat is greatly helped by the excellent variety of enemies for you to slay. Progressing in the campaign adds new and dangerous enemy types, each of which requires you to adopt a particular offense strategy and stick to only one or two weapon types. For example, later in the game, you encounter two hounds, one of which can only be attacked when you are in angel weapon mode and another one only in demon weapon mode. Having to fight both at once becomes extremely tricky and forces you to think on your feet. Scenarios like these make the countless standoffs more than just a mindless hack-and-slash fest and elevate the combat to a truly intelligent game of defending, evading and brutal pummeling. The boss fights are a different story though. While not entirely bad, they resort to the tried-and-tested formula of learning the pattern, retreating and attacking. As a result they tend to get a bit repetitive after a while.

Defeating enemies awards you red orbs which you can use to purchase items in the store, such as vital stars that replenish your health, and the ever-helpful gold orbs that resurrect you. You are additionally awarded white orbs that let you unlock additional moves and upgrade existing moves in the in-game store. Admittedly, the gigantic list of moves sometimes seems imposing, as you only tend to remember and consequently execute the most basic moves in the heat of battle. But again, having the option to rain down bullets upon the enemies on ground while whirling down from the sky in a deadly tornado is never a bad thing.

The levels feature numerous hidden lost souls, basically souls trapped in walls for you to free, which grant you more red orbs. Then there are keys to collect, which unlock doors guarding challenge missions. Completing these missions grants you health crosses, collecting 4 of which increases Dante’s permanent health. Freeing all the lost souls, collecting all keys and opening all doors in a level gives you a 100% completion rating. This rating, coupled with the time taken for level completion and the overall style points decide the rating you get for a particular mission, with the coveted SSS rating being really elusive.

DmC is breathtakingly beautiful. While the game is great from a  technical standpoint, it’s actually the outstanding art direction that truly sets it apart. You see, Dante frequently gets dragged into Limbo, which is where he encounters the demons. The visual transformation that accompanies this transition is amazing. The colour palette becomes noticeably brighter, and a blackish hue dominates the world of Limbo, making for some interesting and captivating visuals. The people who are in the real world at that point are represented as black, ink figures only to disappear as you approach them. When the demons start playing with the world, DmC truly shines. Ground breaks apart into chunks, buildings crumble and the whole world gets turned upside down, sometimes literally. The environments get twisted and corrupted, and you can’t help but stare at the awe-inspiring visuals playing out. One particular standout is the mission where you enter the reflection of a news tower in the river. The entire level is upside down and understandably covered in water, and it probably features some of the best artwork in recent memory. A few texture pop-ins and bugs aside (on the PS3), DmC is a visual feast and truly memorable.

The soundtrack is excellent too. Most of the fights are dominated by fast-paced heavy metal or dubstep tracks to lend a sense of speed and fury, and it works well. The voice acting is consistently excellent, with Tim Phillips doing complete justice to the cocky, witty Dante. The rest of characters are also voiced impressively.

DmC is a great example of a reboot done right. It does complete justice by its source material, delivering a rich, well constructed origin story for Dante while giving fans everything they love: exploration, witty dialogues and enjoyable banter between Vergil and Dante, and fast, furious and fluid combat that transforms into beautifully choreographed symphonies of death.