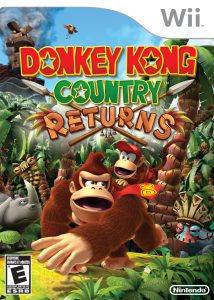 Story: Donkey Kong games as well as Mario Brothers games have never been much about the story. This game is no different. The story starts off with Donkey Kong and Diddy Kong taking a nap, they awake to witness that all their bananas are being taken by a bunch of Tiki Masks. Both Kongs take chase but the Tiki Masks along the way hypnotize the rest of the creatures in the  jungle to attack the Kongs on sight. This games story never goes deeper than that as you travel across 8 worlds and 56 levels trying to reach the end to get your bananas back. At the end of each world a Tiki mask takes control of an animal, whether it be a centipede, rhino or something else and that in turn becomes your end of the world boss. The story overall is nothing to care for. Unless were talking about Zelda games, Nintendo has never really been known for Deep story lines; the gameplay though makes up for it.

Graphics: For a Nintendo Wii game, this is one of the best ones that I have seen. Character models are amazing in detail. Donkey Kong and Diddy Kong look more life like than ever before. All cutscenes are generated in-game, but are still really impressive and really do push the console to the brink. Backgrounds are impressive but you can tell that some of them are rough around the edges and not as crisp as they could be. This game does not hold a candle to the Sony Playstation 3’s or the Microsoft Xbox 360’s graphics but for Nintendo Wii, this game is one of the better looking games.

Gameplay/Controls: The games formula has not changed much in the last 15 years or so. The gameplay is the same as any other side scrolling Donkey Kong Country game that any of us have played. You are given a mini map and from this map you can select a level to go to or you may select to go back to a previous world. In every world there is also a item shop where you can spend coins you find to buy more lives, buy keys to unlock certain levels on the mini map, buy potions that heal all your health, or buy  a bird which will show you in one level in that world where secret items or areas are. Once you choose a level you jump right in the game with a very short loading screen of about three seconds. By default you play as Donkey Kong, if you decide to play co-op than your partner is Diddy Kong. Playing solo you have two hit points by default, if you find a barrel that says DK on it than you can break it open allowing Diddy Kong to ride on your back.

This will give you a total of four hit points and the ability to use Diddy Kong’s Jet Pack ability which if used after you do a short jump allows you to levitate in mid-air for a short period of time. If you go under three hit points though you will lose Diddy Kong and will now have a maximum of two hit points. To get Diddy Kong back all you need to do is break open another DK barrel. While playing solo, losing a life causes you to go back to the last checkpoint.   If you are playing co-op and one of you dies, than the other player can continue on and try to find a barrel.  Breaking open the barrel will bring back the dead player at an expense of a life, unless the player who is dead does not have anymore lives, than he will not be brought back.  If both players die though, you are brought back to the last check point. Failing more than 7 times will result in the game asking you if you would like help beating the rest of the level. If this option is chosen you lose all items (coins and bananas) you have picked up for that level and the game will show you the perfect path to take in order to beat the level.

The levels themselves all have the same goal in mind; you run through the level trying to collect K-O-N-G slabs which will give you certain bonuses, collecting bananas which after collecting a hundred of them will give you an extra life, and trying to find secret and alternative paths. In some levels you are given the ability to ride in a mine cart or use a rocket ship made out of DK barrels through the whole level instead of being on foot. You have a set number lives and when you run out the game is over (unlike Kirby’s Epic Yarn where there is no way to die).   At the end of each level you are to hit a barrel that works as a slot machine. From this barrel you can win one, three, or five lives, coins or bananas. When the barrel stops on bananas or coins you need to alternate the controller up and down doing a swing motion.  You then have a limited amount of time to hit the barrel to get more coins and bananas. 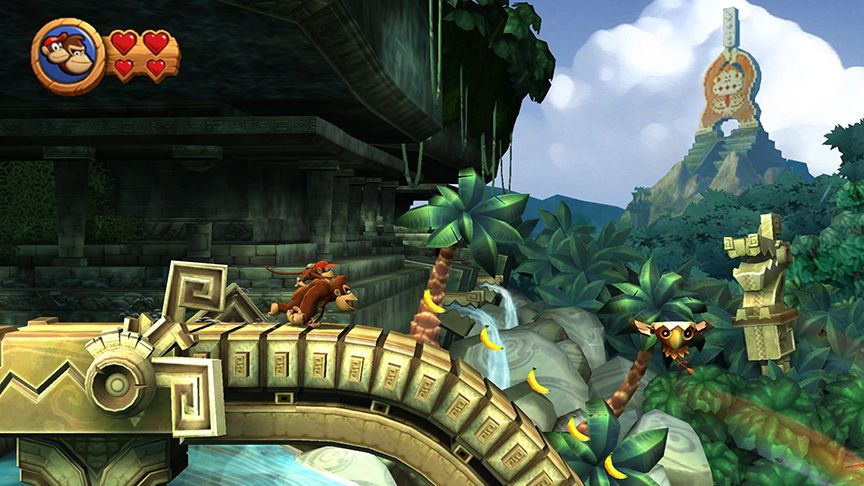 The game so far sounds like a typical side scrolling game such as New Super Mario Bros, right? The thing that makes this game stand out is the level design. Every level is unique in its own way and rarely is a concept recycled.   In some levels you are swinging from vine to vine, than all of a sudden you swing into a cannon, then this cannon shoots you the the background. Donkey Kong looks as if he is far into the background, after fighting enemies in the background you are shot, thrown, or swing back into the foreground. Some of the best levels were the mining cart levels where you are thrown all around from the background and foreground and before you know it you are in a crazy roller coaster, with sharp turns, loops and elevators. Another level is one where you start the level being shot into a barrel and the rest of the level is timing barrel shots. You are being shot all over the place: behind statutes, around them, straight down in the underground, and than shot back up where you end it all with a tiki statue fight, all while you are transferring barrel to barrel. From what I could tell, every level was planned and tested until perfection was achieved. Thankfully through my playthrough of the game I found that the controls were very straightforward and easy to use.

The game can be played with the Classic Controller, Gamecube Controller, the Wii Remote held sideways (mimicking a classic NES controller) or a combination of the Wii Remote and the nunchuck. Through my playthrough of the game I used the Wii Remote and the Nunchuck combination as this was the way that was advertised and shown when I was watching trailers of the game. When I was playing co-op with my wife she used the Wii Remote on its side, which from her experience was harder to use and eventually she opted for the Wii Remote and Nunchuck combination. You use the analog stick on the  nunchuck controller to move the Kongs along the screen either right or left while using the “A” button to jump (or levitate depending on if you have Diddy Kong with you.) Holding the analog stick right or left while making a swinging motion downward with the Wii Remote will cause Donkey Kong to barrel roll forward. Swinging both the controllers in a downward motion allows for Donkey Kong to use his signature ground pound attack.

Difficulty: I assumed that since this was a first party title from Nintendo that the game itself would be pretty easy. That Nintendo would want every single fan to see the ending to their wonderful creation and be able to experience the whole game. Unfortunately, I was wrong. The first world was really easy for me and I blew through it without losing a single life. By the 3rd world I was losing a life or two in each level. By the time I made it to the last and final world I was losing about six to seven lives per stage. By this point I was pulling my hair, beads of sweat were running down my forehead, and I was throwing my controller all over the place. Needless to say this game gets very difficult very fast. I know friends who played this game all the way through co-op and they said that their experience was even worse, and really tested there friendships with the people they were playing with. My recommendation is on the first play through, do not play co-op. From what I experienced with the difficulty (also with no way to lower the difficulty) I would say that this game is definitely not recommended for anyone under the age of twelve. The difficulty and the pace of how difficult it gets would make any kid under the age of twelve destroy their Nintendo Wii system. This game was made with the intention that the veteran Donkey Kong Country players would have a challenge and also nostalgia.

Conclusion: Donkey Kong Country Returns is a great game, and definitely one of the reason that you should pick up a Nintendo Wii if you have yet to have picked up one yet. With easy and user friendly controls, great level design, beautiful graphics, and a good challenge I would recommend this game to anyone, as long as you can take the frustration. This game is definitely a Keep It.