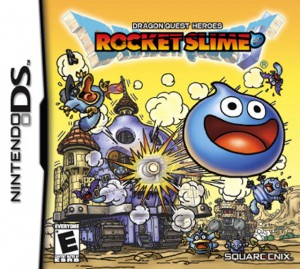 Another old title I recently picked up is Dragon Quest Heroes: Rocket Slime. This spin off of the ever so popular Dragon Quest Series was released in NA in 2006, and stars my favorite monster, the Slime. After playing this game I wish I had gotten it sooner.

Dragon Quest Heroes: Rocket Slime takes place in Slimenia in the capital city of Boingburg. While playing with some friends Rocket swallows the Hero’s Flute and stretches into a flute shape. At this point the town is invaded by an organization called the Plob. The Plob captures everyone but Rocket as he looks like a worm not a slime in his stretched position. Rocket begins his journey to rescue his fellow slimes, who have been locked up in large treasure chests. As Rocket attempts to free his people he will acquire a Tank that will let him battle the tank army that the Plob have. He will eventually discover that the Plob is attempting to resurrect an evil force called “The Dark One”.

The game is seen from an overhead view. The touch screen is not utilized at all. While Rocket has the ability to jump as well as hover, his primary technique is the Elasto Blast. This is where Rocket stretches himself like a rubber band and launches himself at the enemy, with the strentgh of the attack determined by the length stretched before attacking. . The Elasto blast is also used to pick up objects and enemies. When an enemy or object is hit by the Elasto Blast, it is sent flying, giving Rocket the opportunity to catch the object on his head (up to 3 items can be held at one time). Rocket can then send the objects, enemies, and Slimes back to Boingburg using the Slime Railway. Any item or enemy may be used as a weapon if thrown at an enemy. When a Slime is sent back, the Slime will send a letter to the player, including either an item or a recipe for an item. Items are added to your tanks inventory of ammo, and when an enemy is sent back, that enemy will become a resident of Boingburg. If 30 of the same enemy are sent back they become available as a crew member for the tank.

Each stage has a certain number of Slimes to be found. The game uses a day/night system, causing different enemies to be available at different times of day. Tank battles play a big part of the game. Defeating a tank gives Rocket a specific item and a Slime, who returns back to Boingburg. Most stages have a boss battle near the end of the stage. All bosses have a health meter, which must be depleted for Rocket to progress any further. When the player leaves the stage, a screen is shown detailing what Slimes the player acquired in this session of the stage, as well as any items and enemies that he or she collected.

In between stages, the player is sent back to Boingburg to rest. In the beginning after the Plob attack, there are no Slimes remaining, and the Plobs have destroyed much of the town, leaving large spiked balls blocking much of the houses and the village. These spiked balls have ST written on them, meaning “Slime Tons”. The number listed is the number of Slimes the player must rescue in order to get rid of the spiked ball in question. After a certain story point is reached the Slimes rebuild Boingburg back to its state before the attack. There are several shops and activities to be done in town depending on the slimes that have been rescued. There is an Item shop (never used it), a church for saving, an alchemists for item creation (used once), tank outfiter, tank arena, and surfing minigame. 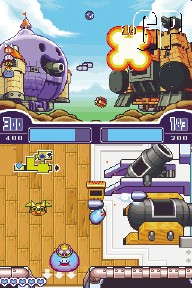 Tank battles either occur in the stages or at the tank battle arena in Boingburg. During battle, the top screen displays a zoomed out view of the two tanks on either side of the screen, showing what projectiles are inbound. The bottom screen displays the standard game play area. Each tank has two cannons that ammunition may be loaded into, and an HP meter. Ammunition comes from several chutes inside the tank. The ammo is delivered on a random interval, you have to keep moving from chute to chute to find more ammo. The top cannon lobs the shot, and the bottom cannon performs a straight shot. Ammo is blocked if it collides with the ammo of the enemy. Certain ammo, such as shields, can take several hits before falling. The battle is won by first reducing the tanks HP to zero, which breaks the entry door. At this point you can invade the tank and destroy it’s engine causing the whole thing to explode. The crew you take with you each have their own specialties. Some load the cannons, some acts as gaurds, others infiltrate the enemy tank to steal ammo and cause havoc. I found the initial battles are easiest with infiltrators, and the later battles you will likely want extra help loading the cannons.

While there is a multiplayer component it is limited to tank battles.

I found out the hard way that the game will not consider you the Hero of Boingburg even after the “Dark One” is defeated as I had not rescued all the slimes yet. You need to find all 100 slimes to see the end story. After that the game returns to boingburg and you can complete the tank arena or the museum side quest.

The game was super fun. It took me about 15 hrs to complete (I did not attempt to get S rank in the Tank Battle Arena which can easily take up a few more hours to complete.) I found myself straining to put it down. Don’t let the cartoony graphics or the E rating make you think its only a game for “kids”. A fun game is a fun game. I would definitely keep it.