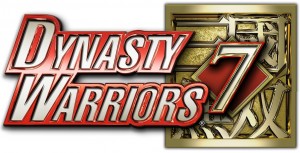 Dynasty Warriors has been one of Koei’s most well-known series since its debut in 1997. Until now, they have released six iterations, each with minor tweaks but all staying true to the main concept of the game: run around China during the Three Kingdoms period and kill as many people as you can. Omega Force and Tecmo Koei have once again made sure that Dynasty Warriors 7 holds true to that mechanic with a few additions.

In story mode, there has always been the option of playing through each of the three main kingdoms: Wei, Wu and Shu. In addition to these, the Jin kingdom is now also playable, making it the first Dynasty Warriors game where the player can actually unify the kingdoms. This iteration also does away with story modes for each character, instead centering the story around the kingdoms themselves and switching from character to character as the story moves along. Between battles, cutscenes between characters are interspersed with narration describing the overall history of the land. While they do a decent job of setting the stage for when and where things are happening (which is an improvement over previous Dynasty Warriors titles), there are times where the story seems to suffer from a little hand-waving. It also would have been nice to pick which character to control during these battles, but since playing a character in Story Mode unlocks them in Conquest Mode, being forced to change characters does have its benefits. 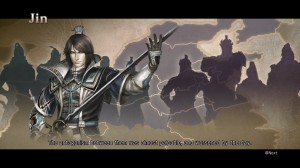 Once a battle starts, the character can switch between two weapons of the player’s choice. These weapon settings can even be changed mid-battle as the entire weapon inventory seems to be located somewhere in Hammerspace. Attack animations and combinations are based on the weapon being used, and are roughly the same from character to character. The only major differences are whether a given character specializes in a weapon or not, which determines how quickly they can attack and whether or not they have an EX move (a signature attack only available to certain character/weapon combinations). Attacking will build up the Musou gauge, letting the character unleash their personalized supermove. The vast majority of the enemies you will encounter are nameless foot soldiers equipped with either swords or bows, many of whom can be killed in one or two hits as your ride by on your horse. During each battle, though, players will face off with a handful of enemy generals who seem to have at least some weapons training. At lower difficulty levels, even these guys can be juggled in a single combination until they die, but as difficulty increases, they will actually start to block and perform combos of their own. Unfortunately, players have to wade through a sea of faceless goons before they get to fight against another skilled warrior.

Characters level up from collecting items that increase strength, defense and HP which are dropped by a defeated opponent, and there is also the rare chance to collect a new weapon. Along with the stat boost, characters will also gain skill points that can be used to unlock further improvements including longer attack combinations and a second style of Musou attack. While leveling up different characters and collecting new weapons can be fun for a while, eventually it just gets repetitive. There are 62 characters to level up and 35 weapon categories, each with around 10 versions of the weapon to unlock. So, there is definitely enough replay value to keep completionists playing for some time. 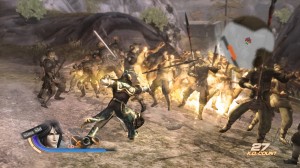 For those who are more interested in battle than the actual story of the Three Kingdoms, there is always the aforementioned Conquest Mode. In this mode, the player moves across a hex-grid map fighting through battle after battle in order to conquer the whole of the three kingdoms. Each battle can unlock new weapons, new animals to ride into the next battle, or simply increase the strength of the current character. The player can switch between any character you have unlocked thus far at any time, which is helpful for getting those final skills activated after playing through story mode. Conquest mode also offers split-screen and online two player co-operative modes. This can make the repetitive battles a little more fun as impromptu K.O. contests might spring up between allies. In Conquest Mode, players have a chance to play characters who were not available during story mode such as the infamous Lu Bu. This is probably the best place to level up characters and get money as the extraneous story has been removed, saving time between battles.

As Conquest Mode progresses, new cities can be conquered which gives access to more weapons and increases the amount of money received for passing the Scholar’s quizzes. Yes, quizzes. The scholar will ask questions about the Three Kingdoms that range in difficulty from “The Three Kingdoms are part of the history of which country?” to “Zhuge Liang used the Wooden Ox and Flowing Horse devices during the Northern Campaigns to transport supplies. It is believed that these were invented by his wife, Yue Ying. What document contains the story of their invention?” While many of these can be answered by paying close attention during Story Mode and talking to the villagers, some of the answers seem to only be available by sitting and reading the included summary of the Romance of the Three Kingdoms novel.

The voice acting in Dynasty Warriors 7 is comically bad at times. Some of the characters’ voices seem completely mismatched to their personalities while others are simply overacted, but there are the occasional diamonds in the rough. One thing that should be noted is that the character names are at least pronounced more accurately than in previous versions of the game. The feared general Cao Cao is no longer “Cow Cow,” instead he is referred to as “Tsao Tsao.”  During battle, the musical score definitely pumps you up with rock guitar, which while motivating for the battlefield, is definitely out of place in 200 A.D. China. During the loading screens in Conquest Mode, players can choose which track to fight to; so, when you’re sick of a particular song, you can find something else you might like. 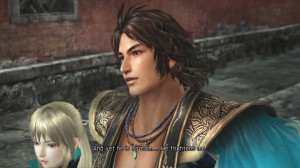 Graphically, Dynasty Warriors 7 is somewhat of a mixed bag, and it clearly isn’t pushing the limits of the PS3. While the character models are decently done, they do occasionally show some clipping of their clothes through each other and the environment. The environments themselves can be somewhat bland and seemingly repetitive to the point that if when not paying attention to the map, one may find him/herself running the wrong way on the battlefield without a clue about being off-course. Also, sometimes the game’s engine does not render enemies fast enough, especially on horseback; so, they may appear randomly, like ghosts on the battlefield. Characters in cutscenes are rendered better than models built for the in-game engine, but they manage to transition between them pretty well. However, if you’re hoping for action that is remotely realistic, you’re out of luck. The fights during these video sequences border on wire fu.

All in all, Dynasty Warriors 7 is probably one of the best entries (if not the best) into the series, but it still has some major flaws. If you enjoy the series, you’ll probably find yourself picking this one up at some point, and if you want a somewhat mindless hack-and-slash romp through history, you could do far worse than this. That being said, this game will probably not make very many new fans of the series.