While somewhat of a niche developer, Compile Heart has garnered a reputation among gamers for the humor and fanservice they inject into their games. If the name doesn’t ring a bell, they have been responsible for Hyperdimension Neptunia, Trinity Universe, Record of Agarest War, Cross Edge, and Mugen Souls. Most of those games, despite their varied settings, have a distinct feel that is identifiable as Compile Heart/Idea Factory work: fun, kind of juvenile, and needing just a bit more polish. With the release of Fairy Fencer F, Compile Heart launched a new line of games known as “Galapagos RPG.” The goal of this new line was two-fold: 1) a primary focus on the Japanese market, and 2) the hope of growing up just a bit without losing their charms. So does Fairy Fencer F meet their goal?

The story of Fairy Fencer F hits on most of the major tropes found in Japanese RPGs…kind of. Fang is down-on-his-luck when he stumbles upon a town with a mystical sword embedded in the ground. He manages to pull the sword (called a Fury) out of the ground, and suddenly a fairy named Eryn appears. The trouble is that Fang is no adventurer, he’s just a rude, hungry kid who heard that the fairies can grant wishes. His wish? All the food he could ever hope for. Unfortunately for him, now that he has pulled the sword out, the duo are bound together, forcing Fang to become a fencer–a warrior able to use these fairy-imbued weapons. Eryn also can’t grant his wish, but she informs him that the Goddess may, if he collects enough Furies from around the world. Thus begins the not-so-intrepid hero’s adventure. 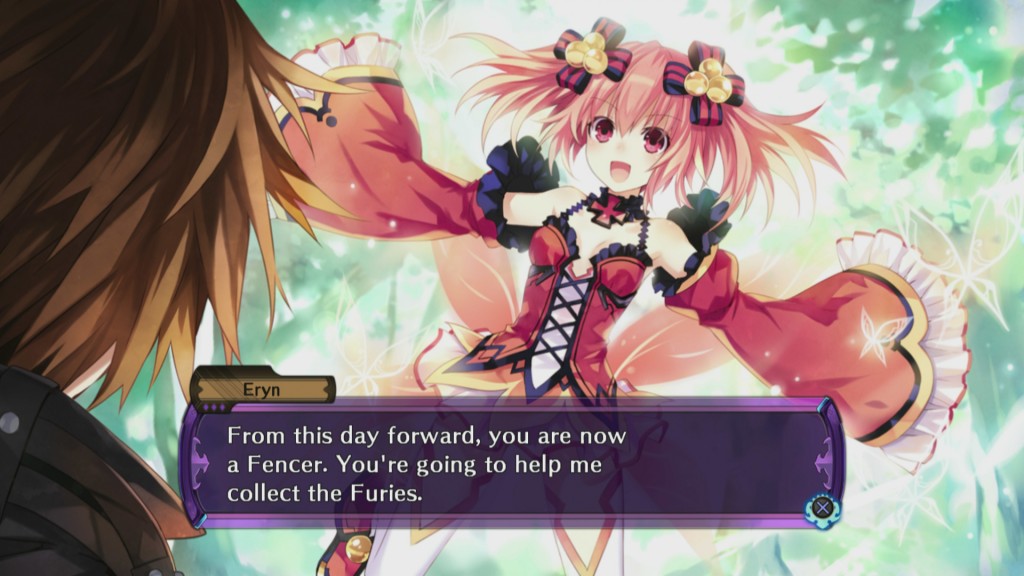 So goes most of the story–Fang meets Tiara, a possible love interest (because every RPG needs one) and proceeds to treat her like crap, repeatedly saying nasty things about her and calling her “bitch” (though she does seem to occasionally derive pleasure from her mistreatment). He is lazy, greedy and everything a hero “shouldn’t be” until he absolutely has to be the one to save the day. In the end, though, the story seems to want to portray Fang not as a bad person, but as someone who is simply bad at being a person. Despite these more juvenile aspects, the story actually pulls together a consistent plot with some emotional investment.

Like Fang, most of the other characters have a similar off-beat nature: Tiara is a snooty elitist who enjoys being verbally abused. Harley is an absent-minded fairy researcher who really just seems to want to be creepy and “examine” the female fairies. Really, the only character who seems to play their trope straight is Galdo, the very earnest bad-guy-turned-good-guy of the game. The use of a super quirky cast reminds me a lot of Mimana Iyar Chronicle (down to the creepy scientist) but with much better execution thanks to better localization and writing. 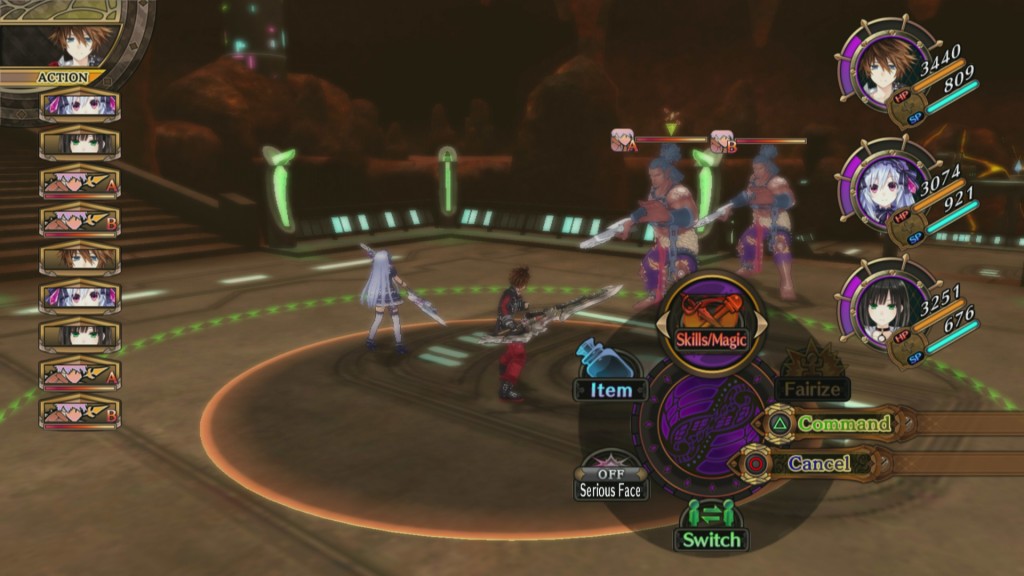 The gameplay itself feels very much like a Neptunia clone. It uses the same engine and follows the same basic formula: dialogue-based story progression, then a short dungeon run, fight a boss and return back to town. Yes, it’s the traditional JRPG way, but when the enemies “warp” into the field the exact same way as in Neptunia, it feels a little lazy. One cool addition, though, is “world shaping.” As you collect more furies, they can be imbued with powers that affect the dungeons, such as changing enemies in the dungeon, raising the amount of money earned, etc. By sticking them in the ground next to the dungeon, they bestow these changes on the dungeon nearby. The game also features a tower that grows based on the number of furies you have active at a given time, which served as a quick way to grind for a little money or experience. Though, clocking in somewhere between 25 and 30 hours, there wasn’t a lot of grinding necessary.

The battle system is likewise borrowed heavily from Neptunia, although it’s had some basic improvements. Fairy Fencer F features a turn-based, arena-style battle system; your character can walk around to get closer or further from an enemy, and then engage them using magic, skills or regular attacks that are assigned to each button using the combo system. As  you fight, the characters build up their tension meter until you can Fairize–a transformation similar to Neptunia‘s Hard Drive Divinity system–except to transform the character throws their weapon in the air and it comes down and stabs them through the chest. The first time I saw it, I was just as surprised/confused as when I saw the guns in Persona 3. The only real downside to the battle system (other than a slightly easier than expected final boss) was that during some boss fights, a dialogue sequence would pop in, and when you return to the battle, the boss would be back to full health, but your characters wouldn’t be recharged. 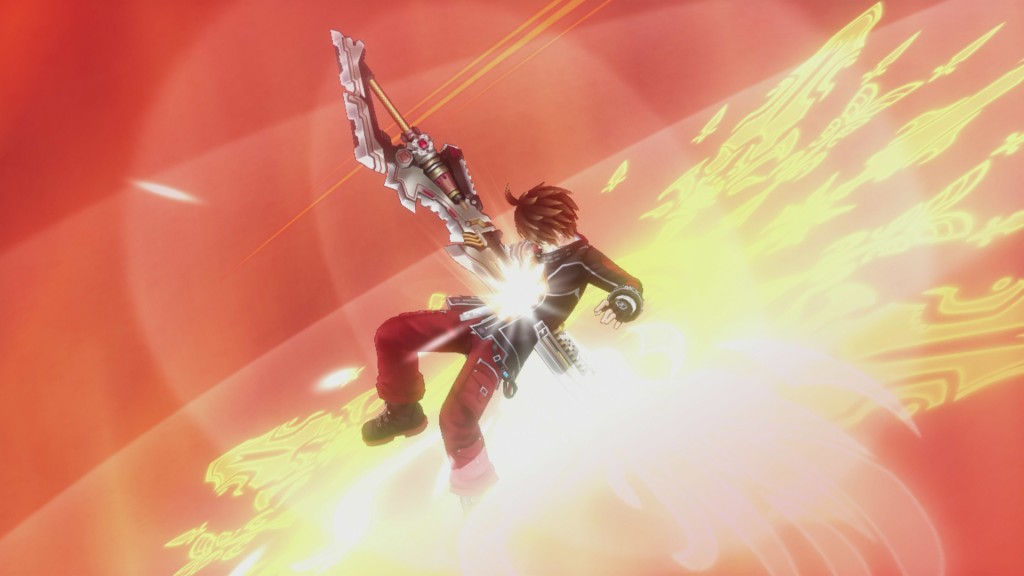 Along with the standard array of experience points, money and items, battles also give weapon points. These are used to customize a character, with a fairly wide array of options. Each character’s weapon can transform into several different forms, with their own set of attacks, which are unlocked with weapon points. Skills and magic are also learned this way, and boosts to attack, defense, range and combo length can be bought similarly, as well. In addition, as you collect furies, you can bond with the fairies inside to gain access to additional abilities and boosts to elemental attack and defense, allowing for a lot of different ways to put a character together.

The sights and sounds of the game were put together by the legendary Final Fantasy duo of Nobuo Uematsu and Yoshitaka Amano, but unfortunately, it’s really hard to see just where Amano’s handiwork comes into play. The character and world designs are a little better than other Compile Heart games, but they just don’t feel like Amano’s style. And part of that may be due to the inconsistent graphical quality. While the 2-D dialogue portraits look sharp and the character designs are nice, the 3-D, in-engine graphics leave a lot to be desired. There’s not a lot of variety in enemies, other than palette swaps, and all of the sprites seem too low-res to be a late-era PS3 game. The music on the other hand, while not sounding like a Final Fantasy game, is fantastic. I really enjoyed the soundtrack, which heavily features Uematsu’s band The Earthbound Papas, especially the rocking “Full Contact” that plays when you Fairize in the first half of the game. It’s perhaps one of my favorite songs in a recent game despite the fact that it feels a little out of place in a fantasy setting, but it definitely pumps you up for the boss battles. The voice acting is also quite solid, though Fang’s abrasive nature gets a little tiresome at times.

Overall, Fairy Fencer F is one of Compile Heart’s best effort yet, though it’s far from perfect. The story, while trope-heavy, is a good mix of humor and plot; characters are enjoyable, and the music is great. Hopefully, the next thing for their to-do list is to step up the graphics a little.