When Far Cry 1 launched in 2004, it was a showcase of the graphical prowess of the original Cryengine and dropped you, as Jack Cravar, on a mercenary infested island miles away from any civilization. Shortly, thereafter Crytek sold the IP to Ubisoft who reinvented the franchise in Far Cry 2 by introducing a new character, or rather 9 characters to choose from, and the character of your choice was sent to assassinate a leader in Africa amidst an ongoing civil war. In many ways Far Cry 2 was like cinéma vérité in video game form. Fast travel was not an option, guns broke down over time, checkpoints were spread over large distances and the player suffered from occasional malaria bouts. The game was praised for its inventive take on first-person shooters, but was also criticized for these same reasons that made other players love it. Far Cry 3 treads a path between the two games.

The third installment goes back to the island structure that made Far Cry 1 so popular but also brings with it fast travel, realistic fires, jamming-free weapons, and impressive flora and fauna, all accompanied by a host of new features. Far Cry 3 is an open-world shooter set on the tropical island somewhere between the Indian and Pacific Oceans. In Far Cry 3, you play as Jason Brody, a spoilt adventure-loving, twenty-something boy who, along with his friends and family, is captured by slave-selling bandits. From there, he starts the quest of getting his friends and family to safety and getting the hell off of the island. Whereas most game protagonists are fearless and budding killers, Jason Brody is a scared little kid who looks in horror when his military-trained brother kills a guard and paves a way for their escape. After he is rescued by the island natives, known as the Rakyat, he gradually morphs into a professional killer through various mysterious tattoos and self-made ability-enhancing syringes. The plot is fairly straight forward but nevertheless the journey is an entertain The main star, however, of Far Cry 3 is not Jason Brody, but rather the island itself, which is brought to life in one of the most gorgeous game of this year. The PC version provides a host of features such as adjustable texture, water quality, lighting effects, geometry along with few other settings which depending on the GPU can make a lot of difference in the visual department. Needless to say the PC version looks astonishing (provided you have a respectable rig). Everything from the grass, to the light piercing through the dense forests (and of course the water) looks amazing. 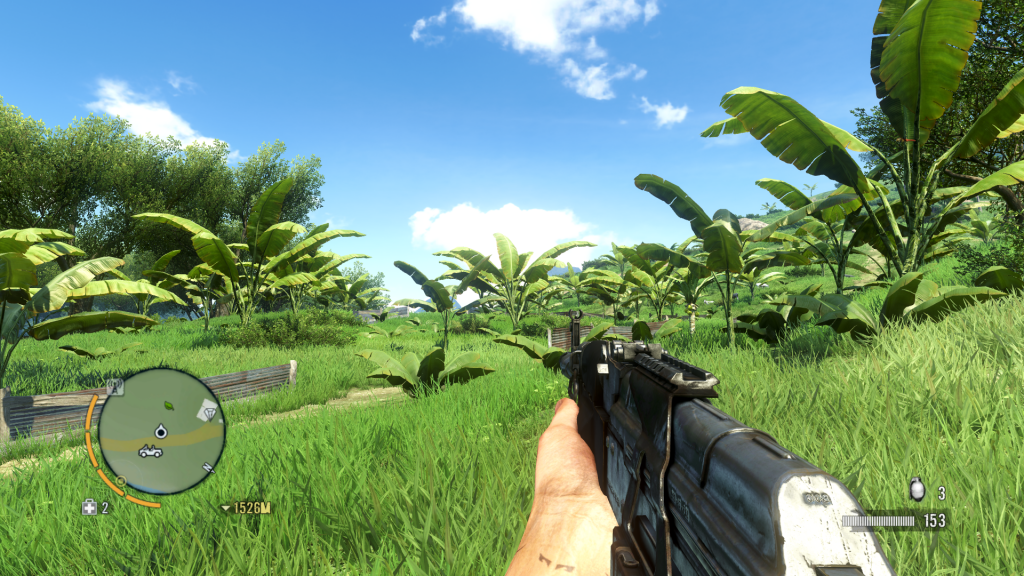 The island is not only beautiful to look at but encourages you to find ways to take your enemies out in the most efficient or your own preferred way. The open island structure provides the ability to either tag the enemies and silently eliminate them one-by-one, go in guns blazing or even using the caged, carnivorous animals against their pirate owners. The beauty of Far Cry 3 lies in the fact that, irrespective of whether the enemy is on alert, there is always an element of surprise possible through the player’s ability to mix with the jungle and choose a new line of attack. The AI is pretty good and as a result encourages stealth, namely knife takedowns as opposed to declaring an all-out war with the pirates. The enemies will try to flank you and force you out of your hiding place once you are discovered, so staying vigilant and on the move is key.

Killing pirates is only one of the chunks of fun that the games has to offer. There are many attractions on the island are rather cleverly introduced. Jason, after his risky rescue, finds himself in the Rakyat stronghold. From there on, he is sent off to disengage the scrambler atop the radio tower which in turns opens more weapons at the gun stores, highlights the animals and plants nearby on the map and also provide XP which can be used to enhance Jason’s abilities by investing in any of the three skill trees. Soon thereafter he is sent off to hunt some animals and skin them to enhance his inventory. The game encourages hunting as different skins are used to create larger backpacks for carrying more syringes, weapons, explosives and ammo.

The island is filled with diversions such as the aforementioned hunting, helping the natives with their petty problems and even fun activities like poker or knife-throwing competitions. The side quests are abundant, but gradually feel more like a chore due to their implementation. For example, hunting missions usually involve going to a specific location, picking up the specified weapon and killing a specific animal. First, picking the specified weapon means dropping a gun from your carefully planned arsenal and then after killing the specific animal, you can either retrace your steps to the weapon swap point (which is no longer indicated on the map) or use fast travel to go to one of the safe houses and re-equip your beloved weapon of destruction. Similarly, helping out natives is usually going from Point A to point B, shooting either pirates or animals, then reporting back, gaining XP and then reporting to some other native in need of your help, each with not-so-compelling stories. 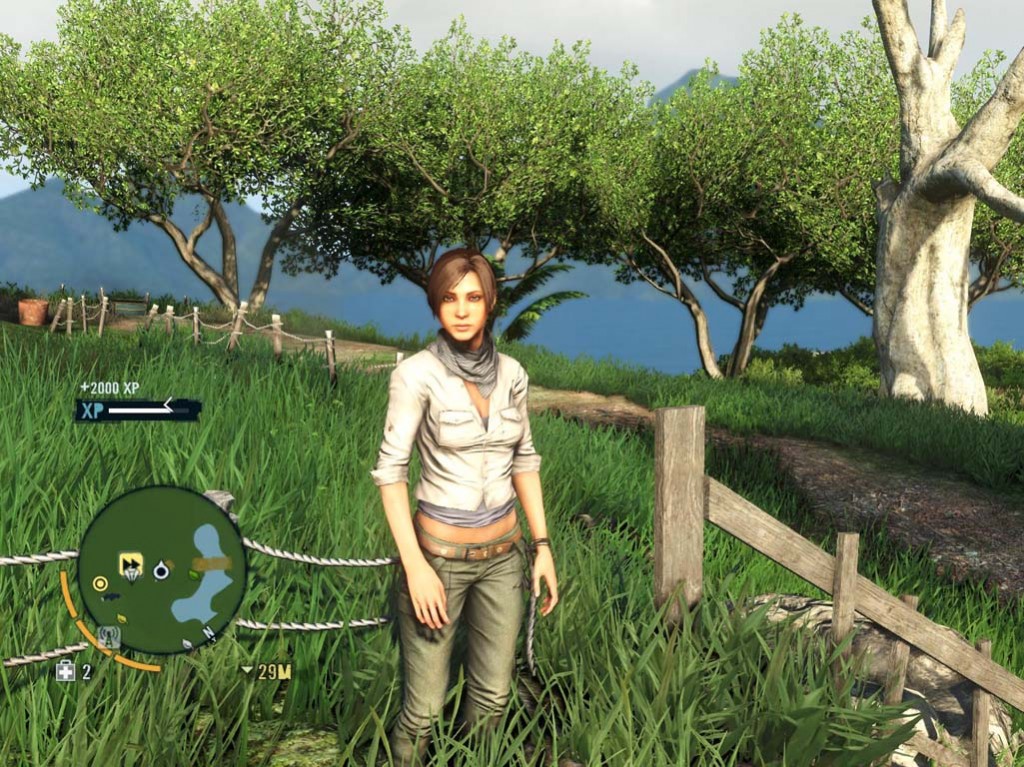 But in spite of their shortcomings it’s easy to get lost in the side quests for hours due to the variety and the relative peace that they offer from the frantic fire-fights of the main story missions. Some of the side missions such as those requiring you to take out a pirate with a knife or liberating an outpost (which also acts a fast travel point) encourage stealth and keep every encounter fresh with the varied locations. Stealthily liberating outposts not only forces you to pick your targets carefully, but also provides almost triple XP if done without alerting the guards.

Whatever minor shortcomings the game has with some of its side quests, it more than makes up for it with the main story missions. The story missions are highly varied and become more and more interesting as the story goes on. Early on you find yourself out of ammo every now and then due to limited inventory but after hunting and skinning animals there is enough ammo to last a lengthy firefight and still hunt a few animals on the way back to the safe house. Also to become even more deadly, there always the option of crafting syringes by combining plants in order to enhance your abilities or to add more bars to the health indicator.

Initially, you start off small, killing a few pirates and blowing up ammo dumps, but gradually you advance to destroying drug fields or impersonating a pirate to intermingle and get close to their leaders. Speaking of the pirate leaders, Ubisoft have done a brilliant job of bringing them to life through cut scenes and acting, with the characters all having equally unsettling personas. The voice acting is top-notch and the tension created in tense fire-fights is also heightened due to some well placed and amazing background music. 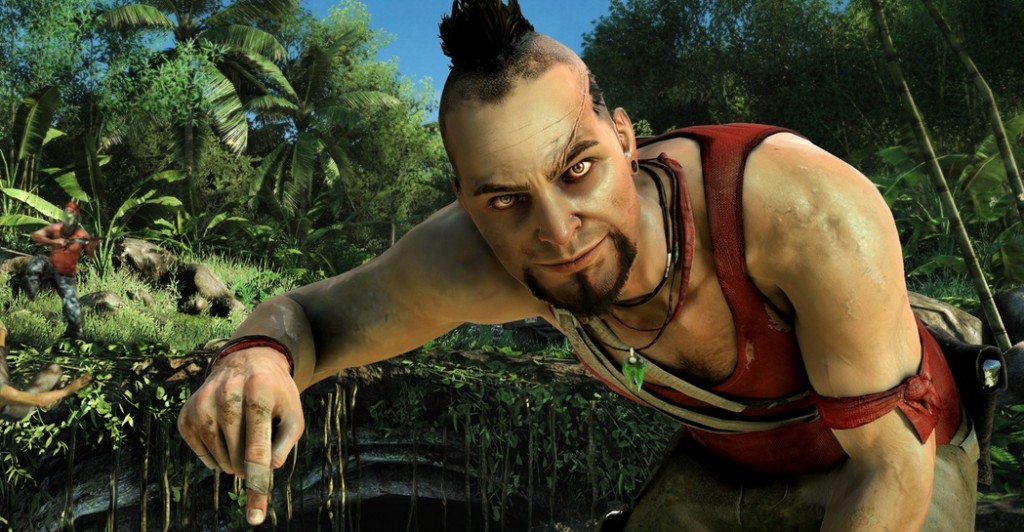 Throughout Far Cry 3, you not only encounter brilliant and unique characters in the form of friends and foes, but the way Jason matures from being a fun-loving kid to a serious, bloodthirsty man filled with revenge and no regards to human life is also worth noting. Along with the single-player mode, Far Cry 3 offers competitive and cooperative multiplayer but it never really feels like a part of the game. Besides the main story players can race around in island vehicles, or go searching for ancient loot letters and the memory cards; both of which help in revealing some of the island’s history.

Far Cry 3 is in equal parts about Jason Brody and the island. It is a story of how far a person is willing to go, risk and lose in order to save his loved ones. Far Cry 3 has enough to keep anyone hooked for hours, and even more for those who like to explore and learn every secret that this island has learned over the years.