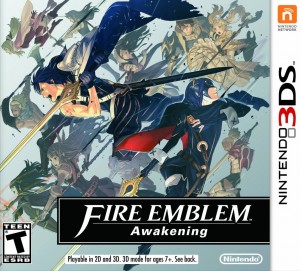 I’ve been a fan of the Fire Emblem series ever since 2003, when the first Game Boy Advance installment was released in North America. The franchise’s unique blend of strategy and sadism has always been engaging to me. Thus, I was greatly anticipating the release of Fire Emblem: Awakening, the first in the series to be released for the Nintendo 3DS, as well as the first game to be released state-side in four years. Finally, February 4th rolled around, and my patient waiting was rewarded with…. more waiting. That’s because, due to a shipping error, all retailers in my area were completely sold out of the game for several weeks. Finally, the wait for a physical copy proved too much for me, and I downloaded the digital version. Of course, my 3DS’ memory was full by this point, and I had to buy a larger SD card to make room. So, in the end, was Fire Emblem: Awakening worth all of this trouble? I’ll be going into more detail about this below, but the short answer is: absolutely.

The story of Awakening follows Chrom, the prince of Ylisse, as he leads a rag-tag band of soldiers in order to keep the peace and protect against bandits. When Ylisse is invaded by the Kingdom of Plegia and its obviously evil ruler named Gangrel, Chrom and the rest of the Shepards must gather allies and defend their home. At the same time, the appearance of the mysterious Risen may prove to be part of an even larger threat. As might be expected from a Fire Emblem game, alliances will be forged, noble sacrifices will be made, life lessons will be learned, and magical macguffins will be sought after. One unexpected story element that I quite enjoyed, however, is the appearance of quite a bit of timey-wimey complications. To go more into these would be unwanted spoilers, but let me just say they do help to keep things a bit more fresh and interesting.

Another story element that mixes things up is the character representing you, the player. While previous games in the series let players give out orders either anonymously or as a faceless, voiceless tactician, Awakening makes the player character a much larger role. Before beginning the campaign, players are asked to create their own custom character out of several different faces, hairstyles, and voices. Players can even determine their gender, which changes the possible interactions with other characters. The player takes on the role of an amnesiac tactician who is discovered and brought into the Shepherds. Your character is extremely important to the story, and has a speaking role in nearly every cutscene in the game. This helps to make players more invested in the story, and actually care about the changing relationships between the many characters. 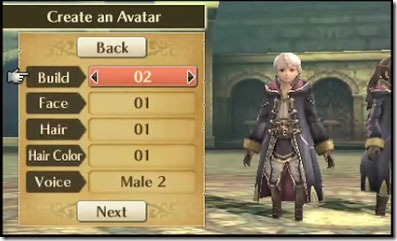 Of special note in Awakening is the increased emphasis on support conversations. While these optional side-stories have been available in every Fire Emblem game released in America, they have never been more streamlined or emphasized as it is in Awakening. Every aspect of the system has been tuned to make it as easy as possible to build relationships and see how each is going. This includes the presence of support-building opportunities in your barracks, items that increase the relationship between paired-off characters, and little hearts that appear above the heads of affected characters every time something happens that influence their relationship (I can’t emphasize enough how helpful that is). However, the most important thing to note about the support conversations is that there is no limit on how many relationships you can raise to level A. This means that players are free to focus on experimenting with pairings, or just focus on a single, favorite character’s entire tree. That being said, each character can only have a single S rank pairing, which oftentimes ends with the two characters having “husband” or “wife” added to their status screen, as well as the potential for children in the future. None of this would matter, of course, if players didn’t care about the characters. Luckily, Awakening has some of the best writing and characterization that I’ve ever encountered. There isn’t a single character in the game who comes off as dull or uninteresting; each have an obvious outward quirk, like a heavily armored knight who is somehow able to sneak around camp unnoticed, ninja-style. As players grow each character’s relationships, they’ll be given further glimpses into their personality and history, which really helps connect them to the player.

Strong connections between player and characters can be a double edged sword, especially in a Fire Emblem game. If played in “Classic” mode, characters falling in battle suffer perma-death, and will not be available for the rest of the game. Being the hipster Fire Emblem purist that I am, I of course played the game on “Classic” mode, as well as the “Hard” difficulty. I tried to the best of my ability to keep all of my characters alive, which proved to be my mistake. Let me be the first to say that Awakening lives up to its legacy. Battles are challenging, often pitting your small for against forces that are often double or triple your number. Against these odds, even a single misplacement can lead to a character’s death, which usually led toan enraged level restart from me. I was only able to finish a handful of stages on the first attempt, and some took over a half-dozen tries. On a couple of occasions, I actually allowed a character to die, rather than restart the entire level over again (This did little to comfort their next of kin). This was usually caused by my only real gripe with Awakening: instant enemy reinforcements. In previous games in the franchise, enemy reinforcements would appear at the end of their turn, giving you some time to make preparations. In Awakening, enemies would spawn at the beginning of a turn, often in behind my lines or next to weaker characters. This turned some levels into trial-and-error, where memorizing where enemies appeared was frustratingly mandatory. Of course, there is a “Normal” difficulty setting, as well as the character-reviving “Casual” mode, for those players that don’t want to snap their systems in half. On the other side, those players that like a lot of punishment can up the difficulty to “Lunatic”. God speed to those brave souls; when I selected this while playing the demo, I gave up trying to save everyone by the second level. 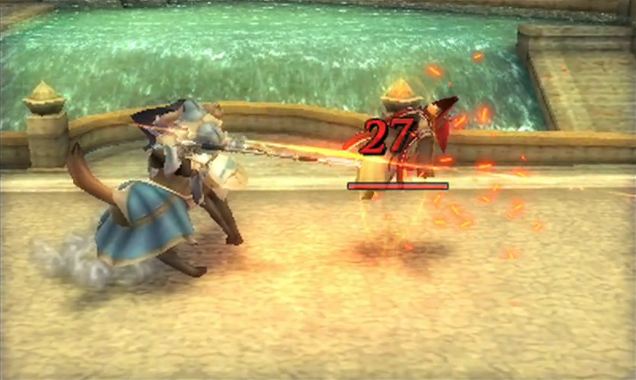 As is the series’ standard, there are several important things to keep in mind during battle. First, make sure to mind the weapon triangle (sword beats ax beats lance beats sword), as well as the weapons that are outside the triangle or have special effects, i.e. bonus damage versus armored, mounted, or flying units. Secondly, keep an eye on the battle preview. Before engaging in each fight, the game will show you the damage, accuracy, and critical hit percentages of you and your opponent. You can cancel all movement that occurred before attacking, so a wise tactician will scout out all of potential moves before confirming. Finally, protect your vulnerable units. The enemy armies will gladly rush to their deaths, if it means they can finish off an exposed healer or weak unit. Awakening offers players an overlay showing all spaces the enemy can reach with a single button press, and its unobtrusive enough that leaving it on constantly is perfectly valid. One new system introduced in Awakening that really shakes up the formula is the Dual Strike system, where characters that have paired up, or are adjacent, to an attacking unit will sometimes jump in to either give an extra attack or nullify an incoming one. Another interesting system is the second seal item, which allows a character to change to a different level 1 class, which in turn gives that character more chances to level and access to additional skills. All of these systems and considerations combine to really give players the sense of personally planning and executing grand battle strategies.

From a graphical standpoint, Fire Emblem: Awakening has three distinctive styles. The first ones are the static portraits, which show up during dialog scenes. The second are the animated cutscenes that play at certain story points. The final are the in-game, three dimensional models that are used in cutscenes and battle. All three are very well done, with some great character designs and overall art direction. The in-game character models deserve special note for managing to be both simple and expressive, which is important, since you’ll be seeing a lot of them. In the Game Boy Advanced games, the hand drawn sprites would dart and dodge like hyperactive children during recess. However, when the series came to the Gamecube and Wii, the 3-D character models they used seemed bland, slow, and uninteresting. Awakening manages to strike the sweet spot, translating the flash and energy of the 2-D sprites into the glorious third dimension. Strangely, these character models all seem to be lacking feet, which is an oddity that is quickly forgotten after an hour or so of play. Even the battle maps manage some visual pizzazz with little touches like birds flying above the battlefield adding some detail. The 3-D effect looks great, giving the cutscenes, maps, and battles a nice feeling of depth without being overbearing. Fire Emblem: Awakening is an amazing game to behold, even when watching your knight get barbecued by an enemy mage. 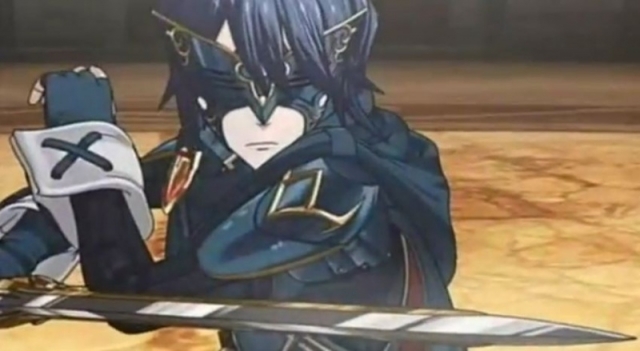 Like the graphics, the sound in Fire Emblem: Awakening is fantastic. The score is full of sweeping orchestral pieces that help get players pumped up for the next battle. Even better is how the songs evolve through the course of a battle, picking up tempo when the camera zooms in to an attack. The voicework also deserves some props. While only the full CG cutscenes are animated, each character has short snippets of dialog that punctuate conversations every time they speak. While I was worried that those might get annoying, after a while I grew to appreciate how much they add to the characters, giving them a little extra burst of personality. For example, when the dark mage Henry goes for a critical strike and yells out “I’m going to kill you!” in a sing-song voice, players are instantly reinforced as to just how bizarre he is.

Overall, Fire Emblem: Awakening is an awesome game, and one I think any 3DS owner who likes RPG’s should look into. Its all the same challenging, deep strategy that you come to expect from the franchise, while simultaneously being more open and friendly to newcomers and more casual gamers. From an audio/visual standpoint, its probably my favorite game in the series, with a level of polish that is a marvel and pleasure to behold. The increased emphasis on support conversations, combined with their impact on combat through the Dual Strike system, led me to care more about my motley crew of misfits than in any previous game. All told, Fire Emblem: Awakening is the best 3DS game released this year so far, and potentially the best one ever.