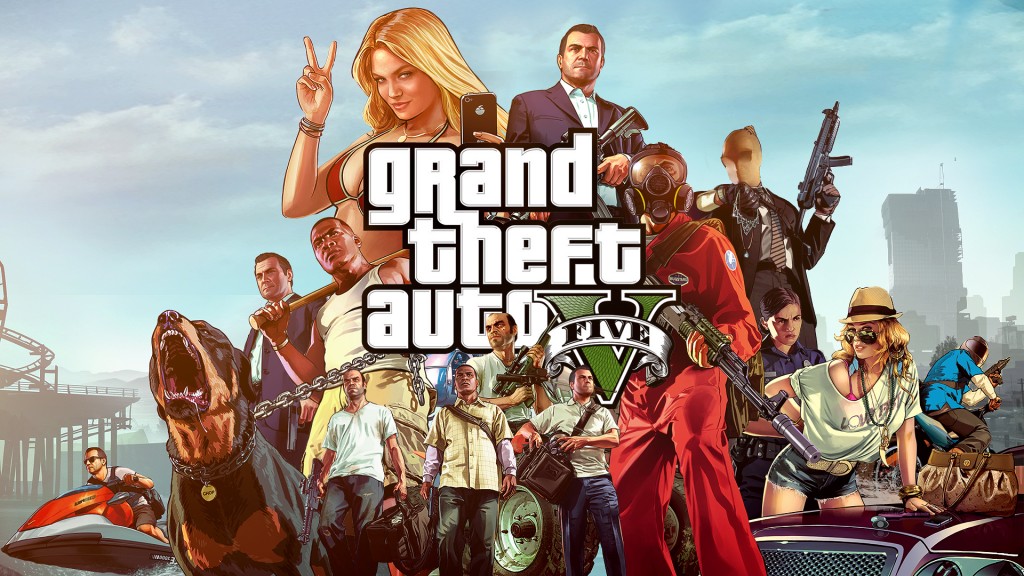 Grand Theft Auto V feels like an anthology of Rockstar’s best works; the best elements from each title in its distinguished career improved, perfected, and arranged into one polished package. It has the dark, risqué storytelling Rockstar is known for, a roster of deep, well-carved and memorable characters that are present in each and every title that comes out of the developer’s studios, and a bevy of open-world elements. Needless to say, GTA V is everything fans everywhere were hoping for and then some.

Violence. Politics. Callous capitalism. The seedy underworld of trafficking and porn. The glam and superficiality of celebrities. Internet’s growing invasion of privacy and the all-consuming social networking phenomenon. GTA V has all the trademark Rockstar flourishes woven into a complex tale of camaraderie, betrayal and explosions. Rockstar decided to tread a different path this time around by using three protagonists to drive GTA V’s narrative. You have family-man Michael Townley, trying to salvage the remains of his broken family with the time he gets between his trips to his psychiatrist and his anger-fueled crusades to wreck the homes (literally) of the numerous men sleeping with his wife. Then you have Franklin Clinton, a young, up-and-coming ‘troublemaker’ from the suburbs, living with his aunt and trying to make a name for himself in the crowded streets of Los Santos, drug-dealing and tow-trucking side by side. And at last you have Trevor Phillips, a reckless, unstable, homicidal ‘entrepreneur’ and owner of a meth empire who effortlessly glides from one sticky situation to another with a penchant for blowing up things, taking out competition and kidnapping people.

While the gameplay enhancements resulting from having three different protagonists are certainly refreshing and welcome, it’s the story which remains intriguing thanks to three sets of eyes from which to view the crazy world of Los Santos. It’s a well-written tale with these three characters finding themselves in the thick of a city brewing with inter-governmental rivalries, shootouts, espionages and full-scale corporate warfare. But what really set GTA V apart are its central heists. See, Michael and Trevor happen to be ex-best buds, who still go on to collaborate on elaborate heists, unable to resist the pull of cold, hard cash. GTA V lets you decide upon numerous parameters of a heist including the approach and the crew members, so each scenario plays out differently. Less skilled crew members demand lesser share of the loot, but they may fail to perform during the heist and end up losing money instead, but you just might walk away with the jackpot, too. Each approach to a heist requires its own set of preparations like securing a getaway car, stealing uniforms or vehicles, scouting the location, and so on. This keeps each heist fresh, exciting and dynamic. To top it off, you can replay them all using different approaches, letting you experience the varying outcomes of missions. Replaying missions also allows you to improve your score: depending on various factors such as completion time, accuracy, headshots, and other mission specific criteria, Bronze, Silver and Gold ratings are assigned to each mission you complete.

GTA V allows you to switch between Trevor, Michael and Franklin on the fly when you’re free-roaming to let you complete character-specific missions and side missions in any random order, and also during missions where all three characters are working together. The best part about this feature is that when you switch between them in free-roam, you’ll see the characters indulging in their usual and not-so-usual daily activities. Switch to Michael and he might be up on Vinewood Hills, taking a drive alone to get away from his bickering family members; switch to Franklin and you might see him playing with his dog or simply taking a swim in his pool; switch to Trevor and you might be welcomed with a not-so-pleasant sight of him on a beach, in underwear with a couple of passed-out (or worse) gents lying around. It’s certainly a nice touch, which helps sell the idea of the characters carrying on with their lives while you play as someone else and makes the switching feel as organic as possible.

Gameplay-wise, GTA V is a lot more balanced. Driving cars feels great as they feel less like they’re gliding on ice. The cover-based shooting mechanics are tight and feel responsive. Melee fighting still feels clunky for the most part, but I’d be lying if I said punching random citizens and seeing others around them flee in fear isn’t fun! Flying planes still is a little difficult to get a hang of, but that just might be me. However, flying is a skill worth perfecting because, believe me, you’ll want to explore Los Santos and its beautiful vistas, its geographically varying terrains and the blood-red hues of its skies during sunrise; it’s unbelievably gorgeous.

Los Santos is expansive and brimming with things to do and weirdos to meet. There are numerous sports activities like tennis and golf to partake in, and the best part is that these feel like well-constructed gameplay elements instead of feeling like tacked-on afterthoughts, a testimony to Rockstar’s pursuit of perfection. There are also properties to purchase, strangers to help, vans to rob and mansions to vandalize. The numerous wacky, hilarious strangers you meet provide you with extremely interesting side quests that range from stealing celebrity undergarments, to patrolling on the US-Mexico border chasing a Mariachi band, to hunting coyotes and so on. There’s absolutely no dearth of variety in GTA V, and there is more than enough content to hold your attention long after the credits roll. The awesome Easter eggs sprinkled throughout the campaign act as the icing on the proverbial cake.

Visually, GTA has never been better. Right from the character models to the expensive cars, the weapons and the glorious explosions, GTA V pushes the aging consoles to deliver some truly impressive graphics that add a lot to the overall appeal of the game. And the changes are not all superficial; the NPCs react more realistically too. The populous city of Los Santos never feels like its inhabited by dumb, two-dimensional entities: walk into a convenience store with a gun pointed at the cashier, he’ll start stuffing cash into a bag, shoot around him and he’ll do it faster; whip out a gun in public and people will immediately report it to the nearest police officer. It’s probably one of the few game worlds that feel truly, tangibly alive.

Continuing their tradition of having excellent soundtrack in every GTA title, Rockstar has created a deeply varied playlist of songs that always make the occasional highway-drive a liberating experience. The in-game radio stations are again brilliant, mixing songs with sharp commentary, reporting the in-game events, occasionally ridiculing various corporations, mocking their own capitalist nature and the overall way of life of an average American citizen. The voice acting is also spot-on and amazing. All three actors play their part extremely well, imbuing their respective characters with life, personality and attitude, ultimately making them their own. The supporting characters are all voiced really well. Presentation has always been Rockstar’s strong suit, and they don’t let down this time either.

If there’s one thing GTA V is short on, it’s flaws. I had some issues with its ideology, including an uncomfortable, extended torture scene and some racist stereotypes being perpetuated in the name of the game, but nothing that I couldn’t learn to live with. I did however encounter a few game-breaking bugs while switching between characters, and an occasional missing marker which wouldn’t let me start a mission, following which I had to reload the last save.

At the end of the day, it’s GTA. It has everything you expect from a Rockstar title, and specifically from a GTA title, but it still packs plenty of punches and still has a few tricks up its sleeve that never let a dull moment creep in. With a story-line filled with extremely likeable and memorable characters, refined gameplay elements, tons of collectibles and side missions, and a practically never-ending list of activities to partake in, Grand Theft Auto V is an achievement for Rockstar, and a treat for gamers.