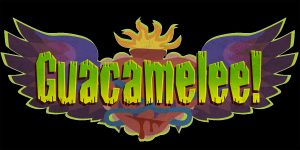 I’ve never been big on Metroidvania-esque platformers; they’ve never been able to hold my attention for long. The backtrack-heavy exploration starts losing its charm after a few hours of collectible-hunting and vermin-slaying. All of that, however, changed once I gave into the dizzyingly colorful and dazzlingly beautiful world of Guacamelee! Quite simply said, it is the most fun I’ve had playing a video game in quite some time.

Guacamelee! derives its nonsensical hilarity from the Mexican lore of Luchadores. After being killed by the evil overlord Carlos Calaca while trying to save El Presidente’s daughter, a down-on-his-luck farmer Juan crosses over into the realm of the dead and gains a mystical mask to become an uber-powerful Luchadore. With revenge on his mind, he sets out to save his love; and that’s pretty much all there is to the plot, which is fine, since the storyline is not what’s going to keep you glued for the next seven or so hours.

The world of Guacamelee! is filled to the brim with zany, cheeky, and outright crazy characters, and the numerous random encounters with them are a joy to partake in, seeing as they spout some genuinely funny and witty dialogue (Juan’s goat-man mentor being the absolute standout). Even though there is no actual voice acting in the game, its absence is never missed and it actually works in Guacamelee!’s favor somehow.

The gameplay of Guacamelee! is the other major reason as to why it’s so much fun to play. You start off with basic attack moves, but as you progress you gain new power moves such as the forward dash and the ground slam, which keep the frantic combat fresh. These moves also enable you to access and explore previously sealed off areas of the map, each of which contain numerous essential upgrades and collectibles. The upgrades come in the form of two types of fragments; one adds to your health bar and the other extends your stamina bar which is needed for you to pull off the special moves. In addition to the upgrades, you can also find chests filled with coins which can be used to buy new outfits that confer special bonuses, or unlock new moves or even buy the aforementioned fragments.

You also gain the ability to switch between the living and the dead worlds, which becomes an indispensable part of traversing the environment in the platforming sections and solving the cleverly designed puzzles. It also becomes a part of the combat, since many a times you’ll face off against foes in both dimensions simultaneously and in those instances combat becomes a tricky affair of dimension-switching for crowd control. While it may seem like having new abilities added constantly will make the combat easier, that never happens. The difficulty is always balanced thanks to new and tougher, or more number of the same, enemies being added to the roster progressively, which require you to think on your  feet and use different moves and abilities on the fly.

These gameplay elements enmesh seamlessly, delivering an experience that is equal parts combat and equal parts fluid, smooth platforming. It constantly blurs the boundaries between the two. It’s really impressive how well the special moves are utilized; they don’t just add to your repertoire of complex combos, they are essential in letting you pull off traversal maneuvers that let you reach those oh-so-close, shiny collectibles.

It is worth mentioning that while you get the Gold Edition on Steam that comes with a challenge level and a few extra costumes, PC is not the ideal platform to play it on, unless you have a controller. The keyboard and mouse control scheme often can’t keep up with the frenetic action, so a controller is highly recommended. And if you have controllers, you can play the campaign in  two-player local co-op, which is a lot of fun.

On top of the gameplay pluses, Guacamelee! looks gorgeous. The vibrant, colourful, distinctive 2D art style befits the game’s hilarious take on Mexican wrestling. The color palette is varied and pops out in every frame, adding a lot to the game’s overall appeal. Each special move is colour-coded and executing one paints out its specific color trail; add that to the already fast-paced, combo-heavy combat and you get a fiesta of colorful explosions that never gets old. The overdose of special effects tends to get distracting sometimes, but it’s easy to live with. The sound design in Guacamelee! is also thoroughly excellent. The Mexican Hat Dance tune, in particular, that plays out each time after you obtain a power is hilarious.

Guacamelee! is a blast to play. It’s as fun as it is funny, delivering an exciting campaign filled with immensely enjoyable characters, combat and exploration. It is filled with solid content and incentives for exploration. The responsive gameplay, the beautiful visuals and the quirky humor all come together to deliver a title that truly needs to be experienced.