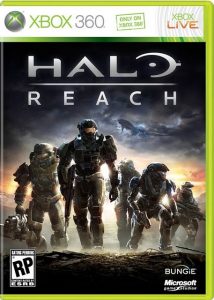 The Halo series has been one of the biggest series for first-person shooters that I can remember. I never was able to justify buying a original Xbox until my friend showed me Halo:Combat Evolved and at the time it blew me away. With a solid main trilogy and other pretty well received games to boot (except ODST), we are finally here after about 9 years with the latest and final exclusive Halo game, Halo Reach. Halo Reach has been the most anticipated game of the year for many gamers. Earlier in the year, Bungie brought us a multiplayer beta that was well received by mostly everyone. I have never been a huge Halo fan, though. I played the trilogy, but didn’t keep in mind the story, or any other part of the lore.

Campaign – I completed the single-player story in roughly 9 hours, playing the whole thing on normal. The second half of the game I played co-op with my fiancee; so the second half was a bit more distracting and frustrating (Sorry Emily, you’re not that great at video games). The story puts you in as a new Spartan on Noble Team, and you are than given the callsign Noble 6. Primarily, your goal is to go around Reach and protect the planet from the Covenant, which, as everyone who has played the other titles knows, ends up failing. Your comrades, as in most Halo games, do most of the talking while you are more silent. Through the whole game, I never felt connected to anyone on Noble Team, and when certain supposedly shocking events transpired in the game, I really could care less about it. The story though is still interesting none the less as you want to see the path taken to the end. The last part of the game in particular makes you really feel as if you are fighting on and struggling to survive.  The game is action packed and there is never really any down time except for your cut scene at the beginning and end of the mission. The game was fun, but sometimes it felt repetitive with all the straight forward shooting. Luckily, right when the game got boring to me, they then broke it up with some vehicle missions. The missions are mostly set-up as “we need to go to point ‘A’ and either secure, defend, or destroy the point, all while covenant forces are attacking.” Once that objective is clear, you are given the task to move once again to another point and do the same thing. It is rather repetitive, but it’s the way they are able to deliver it to you that makes you want to keep going. The fights make a huge difference with certain armor loadouts. New to the game, they add the abilities evade, sprint, active camo, drop shield, armor lock, jet pack, and holograms. Through most of the game the only two loadouts that are given to you are sprint by default and they allow you to switch mostly to armor lock, but once in awhile to the rest. You must pick them up off the ground. So, you really can’t change them up whenever you want. The environments are beautiful, and with the rushed and fast pace you really feel as if you are fighting for your life at some points. Death in this game is not as big of a deal as in past Halo games. Once you get far enough you hit a check point. There are roughly 10-20 check points per level. If you die, you respawn at your last check point and start of with full health and the weaponry that came by default at the beginning of the level.  Co-op mode can be played with up to 4 people either via Xbox Live or through local split-screen. Co-op has been unchanged and keeps it the way that it has always been. When you or your partner(s) die, if the rest of the team can get away from enemies, and away from combat, the fallen partner will be respawned. This works well and keeps the pressure on you when big fights are interrupted from a teammate falling. Also, the difficulty of the game increases depending on how many people are playing with you in campaign mode. So, even though I was playing on normal, my fiancée and I (mostly my fiancée of course) felt that the game was difficult on normal. Another problem that was found was that the A.I. Marines and Spartans did not really help at all. If you got stuck with one of them driving you around, you were pretty much dead before you start driving. On the other hand the Covenant and other enemies were very good about dodging grenades, escaping gun fire and overall were good opponents to be up against. All that being said, it is still the same basic game idea that we have come to know through all of the Halo games. Nothing really different is brought to it, but people who have played Halo before will be able to jump into it with ease, while people who are new to the game won’t have trouble getting adjusted to the game or the control mechanics.

Graphics – The graphics were amazing and a vast improvement over Halo 3, and you can see a very big difference when it comes to them. From what I have read, everything was started and redesigned from the ground up instead of just transferring character models and graphics from Halo 3 and trying to touch it up. If you ever have free time within Campaign or in Multiplayer, look around the attention to details and the overall look of the game will take your breath away. 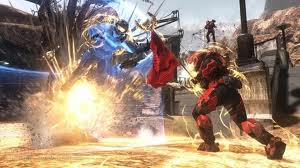 Multiplayer – The Halo series always has been about the multiplayer option. I loved Halo 3‘s multiplayer, but it did have some faults. I didn’t care about the leveling system within multiplayer: no rewards were given to you, and really it was just a bragging right and moved you up in the rank to face harder people. I also did not care about the voting system for skipping a map as it really was just asking if you like this map. If there were enough votes against a map, then you get another map. The modes available in multiplayer vary widely and cover everything including traditional free-for-all, team matches, King of the Hill, Capture the Flag, and Attack and Defend. In Halo Reach, the leveling system has been improved. You now get experience after every match called Cr. This Cr is given out by how many kills you get, general performance, commendations, and luck ( a random amount of Cr is given to you). This is then added to your total Cr, and after you earn enough Cr you rank up. Cr is also used for purchasing things from the armory. In the armory you can buy armor to customize your character.  Unfortunately there is no benefit for wearing different armor, and you are not able to buy special abilities or weapons, which I found rather disappointing. Armor loadouts are also in Multiplayer and each and everyone of them is useful depending on the map that you are on. With the exception of evade and sprint all of them can be used by both Elites and Spartans (evade replaces sprint for Elites. Sprint replaces evade for Spartans). The most commonly used abilities that I have seen from playing multiplayer are sprint, active camo, jet pack, and, depending on if the person is a sniper or not, hologram. when it comes

Final Thoughts – Reach is another great installment in the Halo series. The campaign can be rather short, but is exciting and fast paced, while the multiplayer is still as fun as ever. I think that the multiplayer could have been greatly improved though, and could of learned from other series, as there is really no reward for leveling up besides custom armor. Does this game deserve to be Game Of 2010? NO. It is a fun game, but still delivers the same Halo we have all come to love. That being said, it is a game that is a must have. Everyone I know has gotten this game, and is the only thing that they are currently playing. For the cost of $60 you will get  a good 9-10 hours on single player while the multiplayer will give you endless amounts of time to destroy noobs. This game is defiantly worth the price point. Happy Gaming.