While mk2 was a definite improvement in many ways over the original Hyperdimension Neptunia, Compile Heart and Idea Factory still had a lot of room to improve. A few years after the events of the second game, the story of anthropomorphized console war that is Hyperdimension Neptunia continues, but do the developers manage to improve as much as they did between the original and its sequel?

The story of Victory is a definite improvement over its predecessors, being more humorous than the original while avoiding the awkward moments CFW Trick provided in Neptunia mk2. In Victory, our heroine, the eternally lazy Neptune, is transported from the Gamindustri she knew and dropped (quite literally) into another hyperdimension based on retro gaming consoles. In this retro world, Lowee is the dominant country with a fledgeling Planeptune grasping at straws to hang on to their shares. Lastation and Leanbox arrive on the scene eventually, but all four are put in peril thanks to the plans of the Seven Sages. In this world, Neptune and friends must not only put a stop to the Seven Sages, but also find a way to get Neptune home before she loses all of her shares, and her own Planeptune collapses. 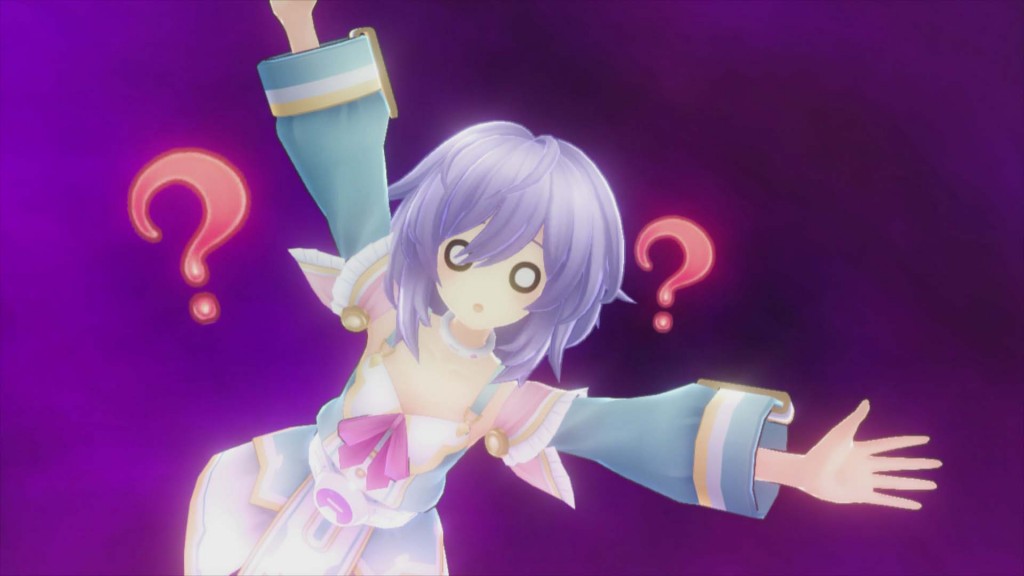 When not just being silly for humor’s sake, the game’s story uses a mixture of breaking the fourth wall, satire and self-deprecating humor to discuss issues that affected the past and present of the gaming industry. Even the trophy set makes a few tongue in cheek comments, as the first story trophy asks “Think any game reviewers won’t get this one?” While intriguing, the story does suffer at the hands of the extensive dialogue scenes which seem to drag on at times. The scenes serve to flesh out the characters’ various motives and personalities, but it could certainly be done more efficiently.

Between these often-extended dialogue scenes, players will mostly find themselves traversing dungeon after dungeon to complete quests or encounter new story points. Most of the dungeons are not every expansive, and many of the aesthetics repeat between dungeons. There are even some dungeons that use almost the exact same layout, making exploration easy, but also somewhat boring at times. Throughout the dungeons, there are various harvesting points for synthesis items as well as a flag which can be triggered to change events that occur there. Of course the dungeons would not be complete without their monsters, which is fortunate as the battle system is one of the most enjoyable parts of Victory.

Like previous games, the enemies appear on the dungeon map and can be attacked to gain advantage in battle. Once battle begins, the team of up to four characters can move around the battlefield to line up their best attacks. Turn order is shown in the upper-right corner, allowing the player to plan their moves accordingly. Victory has four types of attacks that come into play as you fight against parody version of Pac-Man ghosts and dating sim characters along with the more standard bestiary of wolves, fairies and more. There are the standard attacks and special moves (including two more crazy attacks starring Keiji Inafune) and also two types of moves based on the EXE gauge, which builds up by hitting and being hit. Once the gauge reaches certain levels, finishing moves for each character can be added to the end of their regular attacks, and then there are the special EXE moves which will deplete the gauge but do massive damage in return. Having to plan around building and keeping the EXE gauge adds more thought and enjoyment to the battle system. As in previous titles, characters can also transform in to their Hard Drive Divinity forms, giving additional boosts to strength, speed, evasion and for several characters, bust size (one of the many running jokes in the game). 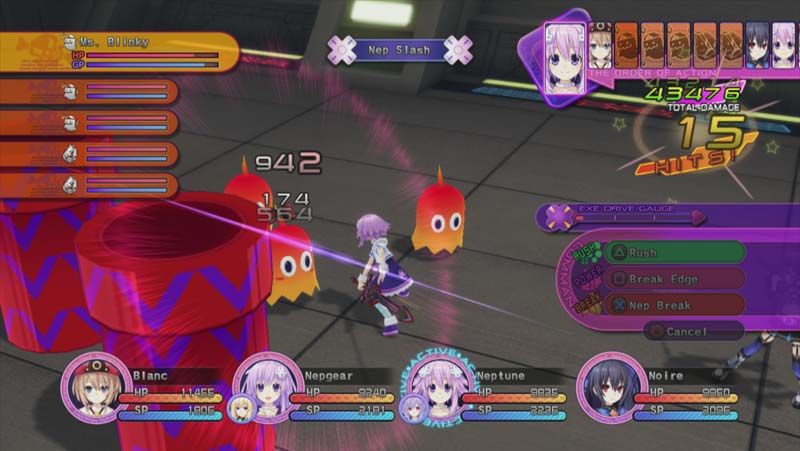 Through the spoils of battle and treasures from exploration, players can acquire the kills and items needed for the quest system. While there are some basic quests which advance the story, the majority of the quests are optional, and there are a LOT of them to do if so inclined. Quest completion is rewarded with more synthesis items or recipes as well as a shift in the popularity of the countries. Managing the balance between the countries is one of the keys to getting the true ending in Victory. Any items that aren’t used to satisfy quests can be used in the item development lab, and can be combined for healing items, weapons, armor and more. The item development system is vital as the game only grants the most basic items in the shop until you create their improved forms via synthesis. The item development system is still somewhat rudimentary, making it easy to follow, but it could use a little flair, like the synthesis systems found in Atelier games.

Victory also adds one more mechanic on top of the traditional exploration system: scouting. As the game progresses, players will meet NPCs who can serve as proxy explorers. By sending these other characters to locations while you progress the story or quest catalogue, there is a chance that they will return with money, items or find new locations. Exploring these otherwise hidden dungeons is the key to finding the synthesis ingredients for the best items in the game and also provide better experience for leveling up.

Graphically, the Hyperdimension Neptunia series has never sought to be groundbreaking, but that doesn’t mean the games are ugly by any stretch. Victory is certainly the best-looking game so far, but the one area where the game suffers graphically is the aforementioned lack of range in dungeon design. With layouts and looks so similar at times, it can make dungeon crawling more of a grind. On the flip side, the in-game sprites look cleaner than past renditions and the character dialogue portraits look as great as ever. The character expressions and designs manage to capture each character’s energy and personality, especially the dramatic difference seen when the sleepyhead Plutia becomes the queen of sadism, Iris Heart. All of the outfit options for characters provide visual variety, too, though they don’t provide any difference in stats. 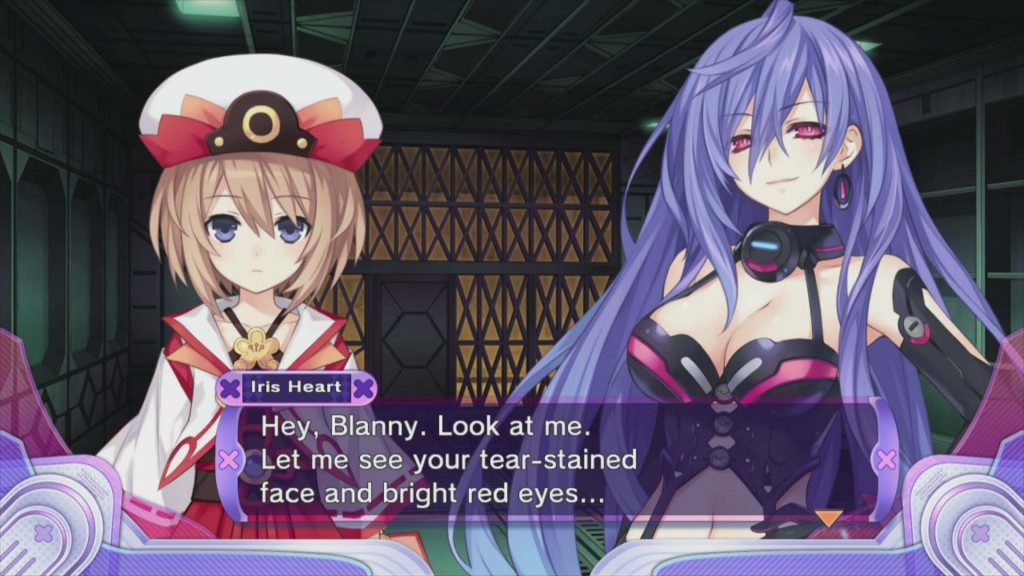 The characters also benefit from an above-average voice acting performance all around, supplemented by a strong localization effort. While some of the scenes do drag on due to sheer length, they rarely suffer as a result of the character performances. A little more variety in battle dialogue would be nice, though after 30 or 40 hours of gameplay, most RPG battle dialogue can become tiresome. The soundtrack, on the other hand, doesn’t suffer at all thanks to the skilled work of Nobuo Uematsu. From the opening theme through the credits, most every track is enjoyable and avoids being repetitive.

While Hyperdimension Neptunia Victory is absolutely a step in the right direction, it still could use some improvements to the dungeon system and method of storytelling. The game is funny and enjoyable to play for the most part, but the sections that drag on might keep this game from being more than a niche success. Fans of the previous games will probably see this as the best one yet, and rightly so. Hopefully, the fourth installment, whatever form it takes, will continue to learn from the past, like the characters in Victory.