I Haven’t had this much fun playing Rock Band in a long time. Everything Really Is better with Legos.

The basic Rock Band setup is still there so I won’t go into details about that. So What’s New. 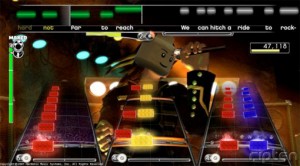 The visuals are hilarious. The partnership with Warner Brothers really shows. Some of the slapstick is straight out of a Loony Toons cartoon.

You’re actually going to care about getting Money (Studs), and fans in story mode so you can buy customizations for your Character, your Loft, and even your Entourage. Speaking of which, you can have more than one employee at a time, and each one gives you bonuses or unlocks new Items and Venues.

You now have the option of Super Easy Mode. For guitar/bass all you have to do is strum. For Drums you can hit any pad or the pedal to play a note. And for vocals you simply have to stay in time with the song, pitch doesn’t matter. And as long as they’re being easy on you, when the crowd meter hits zero you go into Lego Recovery Mode which gives you an opportunity to save some of the score you’re about to lose.

No more playing Tour mode to unlock songs. The entire setlist is unlocked at the start. And if you buy a new copy you get a code that will allow you to rip the songs to the hard drive for use in RB and RB2. Oh Ya, it’s also gonna cast ya $10 bucks for the transfer license. It’s worth it.

On the down side, only songs rated Family friendly will show up in your song lists, or in the Rock Band Store. Not sure what criteria they use to determine this.
NO XBOX LIVE PLAY. Its gone. Guess they finally realized Live is no place for anyone looking for a family friendly environment.

There is a keyword filter when setting names for characters and Band names. Apparently “Ambassador” is out because of “ass” I suppose. So my band is now known as Führers of Roc. Take that 😛

So Do I really need to say it. Its a definite Keeper.