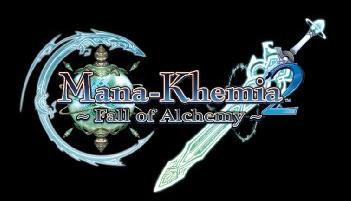 The second PS2 installation in Gust’s lighthearted spinoff series came to North America at the end of August. Mana Khemia 2 was developed by Gust for the PlayStation 2 and brought to North America by NIS America.

In the first Mana Khemia, Al Revis Academy was renowned as the greatest Alchemy school in the world. The flying island on which it was situated was filled with forests and caves offering ample experience for both combat and gathering to budding alchemists. Fast forward ten years, to Mana Khemia 2. The number of Manas in the world has waned, and the island has fallen back to earth. To make things worse for Al Revis, most of the teaching staff has left, and the student body has dwindled. Now, facing budget woes, the school has opened its doors to all comers, offering combat and general studies classes in addition to alchemy. They also condensed the curriculum from 3 years to one (but the length of the playtime isn’t any shorter than the first game). Only a few characters from Mana Khemia 1 make appearances in the one. Flay is the Vice Principal (which should indicate how far the school has fallen), Tony is the alchemy teacher, and Zeppel is the principal.

When you start a new game, you have the option of playing as Raze from the combat school or Ulrika from the alchemy department. Eventually, each one will gather a total of 5 party members to their workshop, some alchemists, some fighters. The two storylines overlap significantly, and after completing one, you can load the clear data to play the other. You can choose to carry over items and encyclopedia information from the first game to make your life easier. Upon completion of both stories, a short epilogue is unlocked. Each protagonist’s storyline takes about 25 hours, and the epilogue takes another few hours to complete. Storywise, Mana Khemia 2 does not take itself very seriously. Throughout the game, you encounter some silly situations and dialogue that make it clear the developers just want to have fun with this game. If you’re looking for a serious epic, you may want to go elsewhere, but if you want a game that makes light of some of the major RPG cliches, you will probably enjoy it.

Each story is broken into 9 chapters, and each chapter consists of classes, a school event, and some free time. If you do well enough in the early classes, you gain extra free time. During free time, you can do odd jobs for money and develop the stories of your support characters. It is pretty much the only way you gain insight into many of the characters since the focus of the main story is Raze and Ulrika. The format does get kind of repetitive once you reach the end of the game, unfortunately, but anyone who has been to high school knows that there just isn’t a whole lot of variance to a school schedule.

When you’re not attending class, your time will be split between your workshop and the field. In the workshop, you get the chance to save your game and perform alchemy. Alchemy is a staple of both Gust’s Atelier and Mana series, and share some similarities. You collect ingredients while out in the field or purchase them from the school store, and combine them using recipes that you buy or find. Depending on the quality of the ingredients and how they are added, you can create different effects on your items. Once created they are added to your “Growbook.” The system is pretty simple to learn and use, and as long as you keep up with your recipes, your battles will be at least reasonably easy.

The character leveling system in Mana Khemia 2 is a little different than most RPGs. You don’t actually gain levels, instead, while fighting battles, you will occassionally gain HP and MP, but there is no indicator to let you know when it will happen. In order to gain your other stats (attack, defense, and speed), you must unlock them in your Growbook using AP gained from battling. Speaking of battle, there’s quite a bit of battle to be had. As you navigate the various environments, you will see red blobs of various sizes, which represent enemies. You can avoid most of them by running around or jumping over them; so you can choose just how much you want to fight. This is a much better option than a random battle system that slows you down. Once in battle, Mana Khemia 2 has a turn based battle system, but incorporates a support system that is remeniscent of a tag-team fighting game. Once a character attacks, you can swap in a benched character who will also attack in combination. The same can be done on defense. It’s a fun system, and very powerful once you know how to use it. Perhaps my only complaint about the battle system is that sometimes, the camera isn’t in the best place; so some text end up overlapping each other, but that’s fairly rare.

Graphically, Mana Khemia 2 will not wow you. It uses anime-style sprites, like every other Gust game. There was only minimal graphical improvement over the first game, but while it definitely doesn’t push the limits of the PS2, it certainly doesn’t hurt the game. The character designs are cute, but the sprites are not extremely detailed. The character pictures that show up during dialogue and in the status screen are pretty well done, and offer a variety of emotions. The soundtrack for Mana Khemia 2, while upbeat and fun, does get a little repetitive by the end of the game. Unfortunately, since much of the game takes place in a few areas, you will be hearing the same songs over and over again for a while. Fortunately, after you beat either Raze’s or Ulrika’s story, you do get the option to change the battle music, which is a nice option. That is not to say that the music kills the game, I do enjoy the opening theme song, it’s cute and catchy, and some of the character themes are great. Pepperoni’s theme is probably my favorite.

Speaking of the characters, the English voice acting has its amusing moments. Personally, I like the voice acting of Ulrika’s group to be better than Raze’s with the exception of Ulrika herself. Chloe and Pepperoni were probably the two best, but they also did a good job of capturing Goto’s essence.

All in all, Mana Khemia 2 is a pretty average RPG, but the support battle system definitely offers a nice break from the traditional turn-based system. If you like Japanese RPGs, you will probably enjoy Mana Khemia 2.