Mario and friends are back for another sports title on the 3DS. Camelot committed a double fault with Mario Tennis Open, but how did they fare when they hit the links? Is World Tour a hole-in-one or did they shank this one into the trees?

Coming out of the clubhouse, you’re greeted with the one major issue that World Tour has–a sometimes-clunky interface. When you first start up the game, you’re given the option of playing Mario Golf, subtitled “Quick Round”, and Castle Club, subtitled “Play as a Mii.” These monikers are misleading, as Quick Round actually houses the challenges that unlock characters as well as new courses, which are then playable in Castle Club. Castle Club meanwhile houses the game’s “story mode,” where you play tournaments against Mario, Bowser and everyone in between . Inside Castle Club, you will find yourself bumbling around a bit at first, as where you need to go isn’t readily apparent, either, but once you figure out where everything is, things get a lot better.

World Tour offers a number of different gameplay options within the world of golf. There are the standard 18-hole stroke-play courses where your goal is to get the best score, of course, but in addition, there are 9-hole courses where you can use items to make your ball fly higher or farther. There are also shorter challenges where the goal is to hit the ball through a series of rings or collect a certain number of coins in only a few strokes. Some of these challenges will net you star coins, which will unlock new courses, but all of them will rack up coins that can be spent in the pro shop. The pro shop will unlock clubs, balls and clothes for your Mii to wear in Castle Club as you play, and you can purchase these items using the coins from playing. The items can help increase your drive length and accuracy, though most of them provide the same bonuses, so once you buy a few, it becomes more about choosing your personal style than major changes to your abilities. 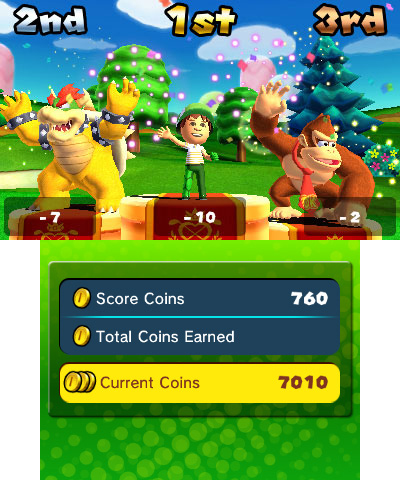 All of this single-player gaming is fun, and there is local multiplayer as well, but for many, the big draw is going to be playing in online tournaments. These tournaments are played asynchronously: you play your round alone and then upload it to Nintendo’s server where your score is compared against everyone else’s. These tournaments use many of the modes available in the single-player game, offering up coin collecting and stroke play matches as well as a “near pin” tournament where you get a single shot with the goal of getting as close as you can (or hole-in-one if you’re good). You can try any of these tournaments as many times as you want and upload your best score, which purists might hate, but since there are thousands of prizes, it’s not going to make or break things for most people. After you upload your score, you can check out the standings, but don’t be surprised when the upper eschelon are getting scores of -20 or higher on an 18-hole course. Even a 13-under-par in the Americas tournament is only good enough for 2800th (which is a silver trophy and 11,000 coins), and my 12-under par garnered me somewhere in the 5700s (again, silver plus 9000 coins) in the worldwide tournament.

The game offers two levels of control, making it accessible for newcomers and skilled players. Controls are switchable from stroke to stroke, so if you want to try the expert control set, you’re not stuck with it for a whole tournament. In easy mode, you simply have to line up your shot and control the power meter, and this is more than sufficient to get through all of the tournaments in Castle Club. Once you move to playing in online tournaments, though, the extra control offered by the expert mode is the only way to consistently place high on the leaderboard. The expert controls allow you to set topspin or backspin on the ball, allowing for a lot more control over where the ball rolls once it lands; however, if you’ve never done it before, it can take a little practice getting all the timing and coordination down. 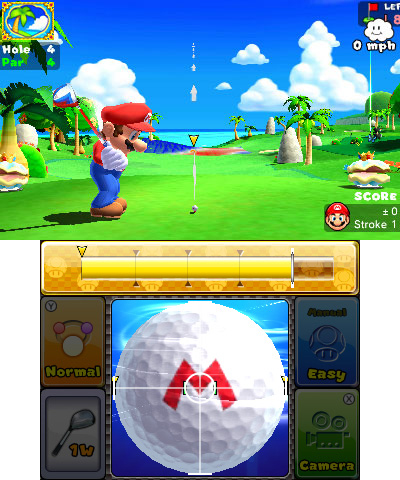 If your skills aren’t up to par yet, or if you want to try out the expert controls, the game offers some very helpful practice areas. The three practice programs are definitely more helpful than a lot of other sports game tutorials, and each is designed to help with a different segment of your golf game: tee shots, approaches and putting. If you haven’t played a lot of digital golf, these should get you used to aiming and teach you how to control for wind and slope of the terrain. Even if you don’t take the time to practice, though, it’s not too hard to figure out the controls, as they are pretty intuitive and the bottom screen shows you what all of the buttons do when you’re out on the course.

The graphics for the game are solid, and each of the courses offers its own touch. The standard course offers trees and bunkers; the mountain/desert course features cacti and large rocks as obstructions; and there is even an underwater course. While some of the color schemes are a little off-putting (way too much pink in Peach’s course), none of them are horrendous. The characters and animations are cute and perfect for a Mario sports title. The audio is decent, but wasn’t as catchy as other Mario titles. Each course has its own musical themes that fit pretty well, but after a few rounds at the same course, I found myself wanting to put something else on in the background while I played.

After the mediocre showing of Mario Tennis Open, fans of the Mario sports games were concerned about the quality of Camelot’s work moving forward. However, those fears can be put to rest, as Mario Golf: World Tour is a considerable improvement over Camelot’s other recent efforts.