With the 3DS’ launch well behind us, a new iteration in the long-running Mario Kart series was inevitable. While most fans maintain that their favorite entry happens to be the first Mario Kart game they played, the series has maintained a strong following over the years, with Mario Kart Wii being the second best selling game on the ever-aging Wii. But Mario Kart has fallen into leagues with Call of Duty, as each iteration rarely changes the formula that originally started back in the 90’s, leaving you hard pressed to find the changes between your first Mario Kart experience and your latest one. Thankfully, while it doesn’t reinvent the wheel that it spins on, Mario Kart 7 is part iteration, part innovation, making for a refreshing experience that can be enjoyed on the go.

In terms of gameplay, the fundamental action that you have come to love (or hate) is still intact, with power-ups, drifting, mini-turbos, boost pads, and tricky shortcuts providing the backbone to good old fashioned kart racing. Granted, Nintendo has thrown in some new abilities and features to keep the ball rolling. Tracks now feature air and underwater sections. When you drive off specially marked turbo-ramps, your kart will sprout a glider, allowing you to take the race to the skies for a brief period. On the flip side, many tracks will feature underwater sections, which you can navigate and drive through with ease, thanks to the propeller that each kart is fitted with. While the flying portions are fun and do a great job of keeping you engaged, the underwater sections don’t really stand out, and are more of a gimmick than a meaningful addition. Mini-turbos make a return, but they have been handled differently this time around. Unlike Mario Kart Wii, players can no longer choose “Automatic” or “Manual” driving settings, which originally had a role in how drifting and mini-turbos work. Small boosts can be activated by drifting for a period of time, regardless of what type of car or what character is used. However, drifting at a sharper angle allows you to build up a mini-turbo more quickly, which provides a greater incentive to improve one’s driving skills, rather than relying on items. Speaking of items, they’re back. While you have the standby shells (blue ones included), banana peels, and bombs, two new items have been thrown into the ring. The Lucky 7 provides those who are trailing behind the pack with seven random items, which can be used at their disposal. The Tanooki Tail also makes an appearance, allowing you to “grow” a tail for a short period of time, and spin it to deflect oncoming shells and banana peels. Coins also make an appearance; collecting coins now provides a speed boost, and collecting 10 coins permanently increases your overall speed for the remainder of the race. However, getting hit by an item or falling off course will cause you to lose coins, which only emphasizes their usefulness. 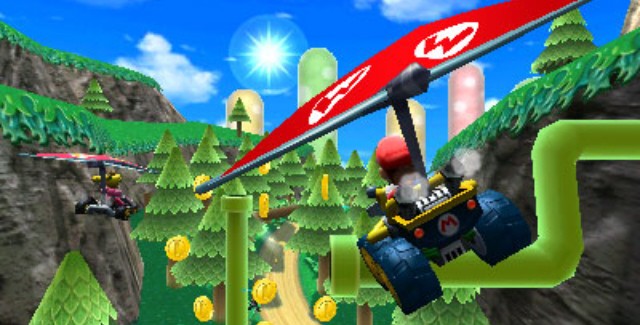 Despite the new additions, many of the same balancing issues that have plagued the series for years return once more. Granted, Mario Kart has never placed an importance on balancing, as it aims for item-driven hectic action, but there are only so many times you can overlook getting blue-shelled right in front of the finish line. The rubber-banding AI is back, but is only noticeable on higher difficulties. Players can unlock kart parts (wheels, frames, and gliders) by collecting coins in races, which allows them to create their own kart for racing. Granted, one can create a kart that changes the preset stats of certain racers, but that means you can play with your favorite racer, regardless of their preset weight. For example, Yoshi normally has  low speed, high acceleration, but it is possible to create a kart that has high speed, low acceleration.

Single player mode features 32 tracks (16 new, 16 retro), which you can run as single races or compete in Grand Prix cups (which consist of 4 tracks) . Battle mode returns, but having to play against bots won’t keep you coming back for more. Unfortunately, the mission mode that was present in previous titles does not return this time around. To be honest, apart from finishing 1st (on the higher difficulties) in the Grand Prix cups in order to unlock extra characters, the single player mode ends up feeling like a one-trick pony. However, the online and local multiplayer options is where the heart of the game lies. Online multiplayer has been revamped and is a definite improvement over Mario Kart DS. You can connect to the Internet via Wi-Fi and join friends, rivals, or random opponents for single race matches. Thankfully, the process to join a game has been smoothed over; the menus are easy to navigate, and the player cap is now set at 8. When playing online, players can now join matches that are in progress; while you wait, you can watch a match live, as opposed to sitting around in a menu. Each player has a VR rating tied to their name, which indicates their relative skill. While the game might match you up with someone who is much more skilled, it usually only throws one or two veterans into your match, meaning you won’t be bogged down by 5 or 6 better players. Furthermore, the VR rating is similar to TrueSkill or the Elo Rating system, meaning lower ranked players can actually go up in rank, even if they outright lose, since the game might realize you were playing against tough opponents. While there is no lag, and you are able to vote on maps, the social element is still lacking. In order to add someone on your friend’s list, you must add their friend code first, which eliminates the ability to make friends on the fly. Furthermore, there is no voice chat, even between friends. These basic features make the online play less compelling, but local multiplayer makes up for it. You and up to 7 other friends can race together, and single cart download allows for every track to be played, though those without the game will have to race as Shy-Guy in a default kart, meaning they better like a high acceleration/low speed setup.

What’s most impressive about Mario Kart 7 are the graphics. Sure, it doesn’t look as good as Mario’s previous 3DS outing, but the game runs at a solid 60 frames per second, even during online play, or when 3D mode is enabled. The 3D effect works nicely, adding a layer of depth, which works well considering you are constantly driving into the screen. The soundtrack features a lengthy set list, with each track having its own theme. The music is standard fare, but don’t expect to find yourself whistling these tunes throughout your day.

Despite the game’s penchant for adhering to the formula too much, Mario Kart 7 has moments where it exceeds your expectations by executing that formula flawlessly. Assuming you have friends to play with, or don’t mind slugging it out online with strangers, Mario Kart 7 makes for a great time.