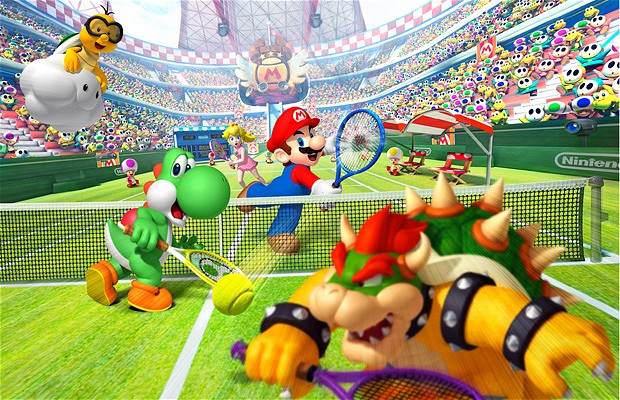 After a few years off the court, Mario and friends have returned to toss up a few serves, and this time, they are taking their matches online. While the game attempts to be accessible, it ends up faulting more often than not, leaving you with a product that is too short, too easy, and too laggy.

When it comes to down to the core tennis, developer Camelot has provided a bare-bones version that works, but lacks any sort of identity. Gone are the days of character-specific abilities, and if you enjoyed the intro animations from Mario Power Tennis and other Camelot titles, you’ll be sorely disappointed. The basic tennis works well, though. There are a variety of shot types that can be pulled off by using the touch screen or the action buttons. While the game fails to explain what each shot does, the game’s manual provides a colorful infographic which gets the job done.

In an effort to produce a casual game, Mario Tennis Open includes an optional gyroscope mode. When activated, the camera will move to an over-the-shoulder viewpoint, allowing you to move the 3DS around to swing the camera. While this concept is novel, the execution creates a significant balancing issue. When playing with the gyroscope mode on, you have the option (by not touching the slide pad) to have the game take over your character’s movement. This, coupled with the fact that the touch screen will highlight the recommended shot type for each volley, means that you can breeze your way through the competition with a few taps. While you can turn this option off in single-player (though the game never remembers this, meaning you will have to turn off the gyroscope every time you play a new match), there is no way to filter out opponents online by control type, which essentially removes any form of competition from the online modes. 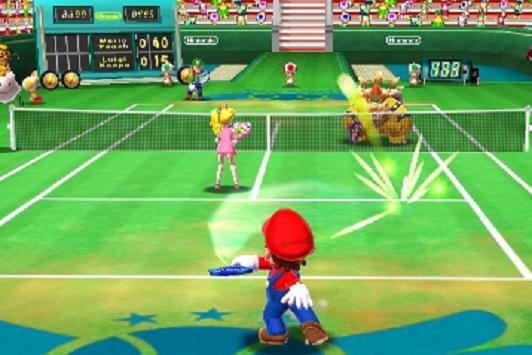 Therein lies the biggest problem with Mario Tennis Open: the balancing. During my run through the game’s eight tournaments, I never lost a match. This isn’t helped by the game’s solution to the lack of individual character abilities: chance shots. Throughout a match, you’ll have the opportunity to pull off a powerful shot, by running to a spot marked on the court, and using the appropriate shot type: red circle for topspin, blue for splice, etc. The problem that arises is that the chance shots are very overpowered, especially in single-player. In later levels, they are necessary, but it eliminates the strategy that is normally required for tennis, and you’ll find yourself keeping your eyes peeled for chance shots, rather than employing any sort of thought process in order to win.

Off the court, there are a few distractions that will keep you busy for a while, but will grow old. The clubhouse allows you to purchase new tennis equipment, but customization is limited to your Mii. Unfortunately, the pie charts that are used to represent stats on each item are very confusing. There is no option to compare the stats of one item to another, and you’ll find yourself picking random items just to see what works. There are a handful of mini-games to play, which unlock coins that are used to buy items in the aforementioned clubhouse. Ring Shot, a staple mode of the Mario Tennis franchise, makes a return, with newcomers Ink Showdown and Galaxy Rally falling short of fun. The standout mode is Super Mario Tennis, where you will play through stages from the original Super Mario Bros. 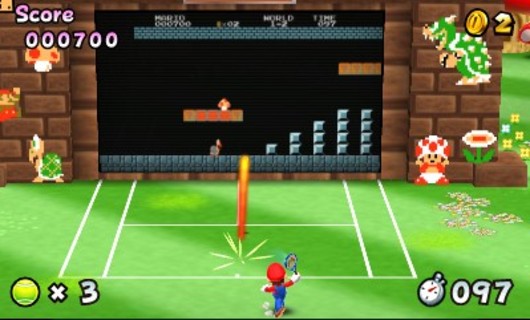 Gameplay doesn’t fare better online. You can jump into a singles match with a random opponent or friend, but doubles mode is restricted to friends. Unfortunately, online play is terribly laggy, even with a good connection. Graphically, the game looks good, with sharp character models and smooth gameplay, though the framerate suffers during online play. However, the 3D effect is pretty weak, and while it would have worked well in gyroscope mode, 3D mode is automatically disabled when using the gyroscope. The game’s soundtrack is adequate, but there are no standout tracks, and it would have been nice to have seen more music from other Mario titles. Character voices grow old very quickly, and a voice is given to your Mii during play, which is a bit of an odd choice.

Unlike Mario Kart 7, Mario’s last 3DS outing,  Mario Tennis Open fails to deliver a meaningful experience, both offline and on. If you can get over the lack of any RPG mode, you might want to give Mario’s latest game a try. Just remember to stick to local multiplayer.