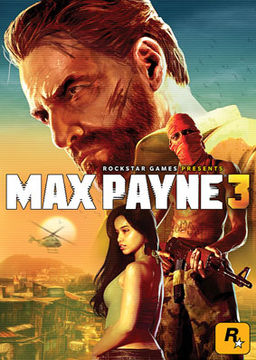 Max Payne is, to put it very lightly, a troubled man. After having his wife and daughter brutally murdered and waging a one-man war against the scum of New York City, Max has slipped into a destitute life of alcoholism and pill addiction. The opening shots of Max Payne 3 reveal a man who has been battered by life at every turn, a man wondering why he still bothers to face the day while still wearing the bruises of yesterday. No matter how many numbing substances Max tries to bury them under, he is still haunted by the demons of his past. Rockstar, having inherited the series from creator Remedy, presents a darker, more miserable Max Payne, and I fell in love with their version of the brutish action hero.

With nothing left for Max in New York but a seedy apartment and a steady supply of alcohol, he accepts a job offer from his friend and fellow cop, Raul Passos. The gig isn’t much—play the hired gun for the wealthy Branco family in Sao Paolo, Brazil—but for Max it represents a chance to start over. Of course, it all goes to hell rather quickly for the hero: family head Rodrigo Branco’s trophy wife is kidnapped by what appear to be common thugs, galvanizing Max into action. From there, the grim narrative escalates in a winding fashion, weaving in and out of flashbacks and revealing double-crosses, betrayals, para-military groups, human trafficking, and more shootouts than you could possibly count. And at the center of it all is the out-of-place American, Max Payne, who is driven forward by a bitter cocktail of guilt, painkillers, booze, and an unrelenting, if not slightly warped moral code.

The story is dripping with all the touches you’d expect from Rockstar: tight pacing, sharp dialogue, slick direction, and impeccable presentation. Cutscenes in particular are a joy; ditching the static graphic novel styling of the first two games, Max Payne 3 employs dynamic multi-frame cutscenes that bounce off the screen, with the occasional phrase of dialogue appearing visually to add dramatic emphasis. Screen deformations like blurs, static noise, and discoloring add a disorienting feel to the action, constantly reminding you what it’s like to be in Max’s drug-addled head. They can be overdone at times, and may even be a turnoff completely for some gamers, but they mostly work very well.  A strong mix of rustic synth tunes and thumping dance music accompanies the story, adding a unique flavor that suits the game well. 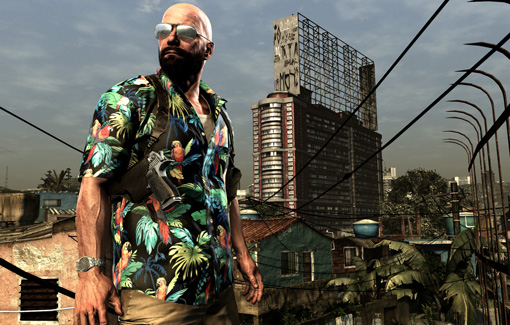 While the story is great in its own right, it would be nothing more than a typical blockbuster without Max as the central figure. The hard-boiled hero’s dryly sardonic internal monologues (voiced again by James McCaffrey, whose exasperated grunts fit Max perfectly) serve not only as an often hilarious gateway into his thoughts, but as a connective device for the player. With every bit of self-loathing Max felt, the more I was drawn to him. Considering the many catastrophic failures he endures over the course of this game (not to mention those of his past), I wanted only for Max to succeed. I cheered for Max in the same way I always cheered for John McClane—and in fact, when Max shaves his head midway through the game, he bears more than a passing resemblance to McClane’s latter day look.

Of course, there’s one place where Max has always succeeded, and that’s in firefights. Rockstar skillfully marries the classic elements of the series to modern day shooter tropes to create some of the most satisfying gameplay I’ve ever experienced in a shooter. Bullets fly nonstop throughout the campaign, and Max often finds himself up against seven or eight enemies at a time. Thankfully, he can even the odds with Bullet Time and Shootdodges, both of which slow time to a crawl, giving Max a temporary edge. The original Max Payne birthed this mechanic into the gaming world, and despite the countless imitators in the intervening years leading to Max Payne 3, it’s clear the mechanic is still at its best in this series. Bullet Time and Shootdodge are implemented wonderfully, and little touches like lying prone in slow-motion after a Shootdodge to drop enemies make both mechanics feel fresh. 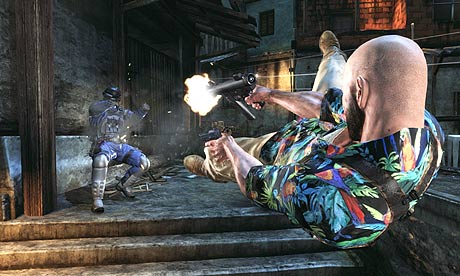 The addition of cover is a nice nod to modern shooters that works well. But worry not, purists: Max Payne 3 retains a comfortable balance between conservative and aggressive styles of play. Stay behind cover too long and the intelligent AI will flank you (it’s not an empty threat this time) or chuck grenades to flush you out. On the flip side, running-and-gunning is still very much a viable (and hugely fun) option thanks to tight controls, the ability to aim down the sights (but again, purists, it’s not a necessity), and multiple aiming types (free, soft lock, and hard lock), all of which are integrated nicely.

At its core, Max Payne 3’s gameplay hasn’t evolved much in the nearly nine years since Max Payne 2, and that’s not a bad thing. The differences, however, lie in the dressings surrounding the chaotic shootouts. Rockstar’s excellent implementation of Euphoria physics adds a weighty heft to gameplay; Max is an old, slightly overweight man, and he no longer turns on a dime. You’ll feel the strain he feels at every turn, like when you Shootdodge too close to a wall and Max thuds painfully against the surface, forcing you to wait a few crucial seconds to fire while Max refocuses. Guns feel powerful, as their bullets cause enemies to crumple around hits and often stumble around before collapsing in a heap. It’s a brutal yet sickly satisfying sight.

Gunplay also benefits from top-notch level design. Rockstar proves they are equally as adept at building smaller and more focused environments as they are at building sprawling open worlds. Each level is photorealistic and begs to be explored, if only to marvel at the astounding attention to detail. Shootouts quickly decimate environments though, as bullets crack surfaces and tear through objects, leaving a mess of debris in their wake. This effect intensifies firefights, bolstering the breathless, kinetic experience. 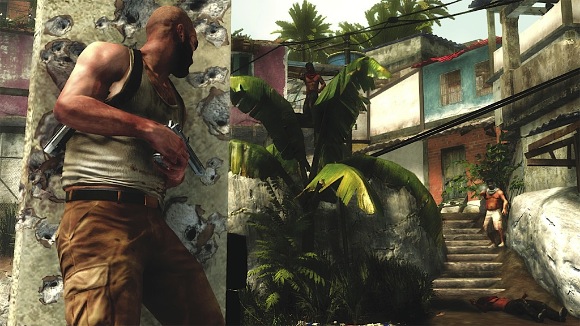 Surprisingly, the challenge matches the brutality of the gameplay. Even on Medium, the default difficulty, I found myself popping painkillers nonstop, countering the absence of regenerating health (a good thing). Last Stand, which allows you a few seconds to shoot your assailant to prevent death, mitigates the difficulty to some degree. But poor checkpoint placement creates an artificial sense of difficulty, especially in later stages where you’re forced to go back pretty far after being killed by a cheap armored boss.

The single-player campaign runs for an energetic twelve hours, after which your attention can be turned to Max Payne 3’s shockingly addictive and deeply rewarding multiplayer. Up to sixteen players can participate in chaotic free-for-all or team deathmatch modes, which are elevated above similar modes in other games by Rockstar’s triumphant translation of Max’s slow-motion theatrics into the multiplayer sphere. Shootdodges can be triggered at any time, and as long as a player has at least half a bar of adrenaline, time will slow for anyone in that player’s line of sight. It’s tricky to get the hang of at first, but once you get it down it adds a cinematic flair to what would otherwise be boring modes.

The real standouts are the unique Payne Killer and Gang Wars. Payne Killer rewards the first two killers by turning them into Max Payne and his partner, Passos, complete with top-tier weapons, two painkillers, and a load of Bullet Time. The rest of the players then enter an exhilarating chase to take down the powered-up juggernauts for a chance to wield their power. Meanwhile, Gang Wars is a multi-round mode that pits two rival gangs against each other with shifting objectives. It’s supposed to be a story-driven mode, but the real thrill comes from how the disparate objectives build toward a final showdown that feels duly climactic. 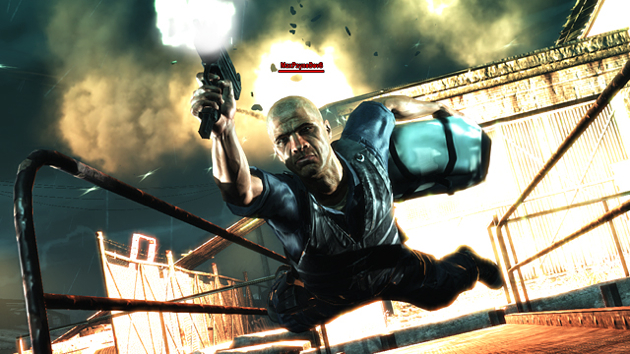 Stat junkies will be pleased by the depths of stat-tracking to which Max Payne 3 plunges, and a rich upgrade system offers plenty incentive to farm experience. Moreover, the integration of Social Club community features (allowing for the creation of Crews, which lead to in-game feuds with rival Crews) and innovative ideas like personal vendettas add to the addiction. Max Payne 3 has a real chance at building long-term appeal, as long as the community takes to it.

There’s no question that Rockstar faced an enormous challenge in trying to reboot Max Payne for the modern era. In the years since the first two games, the landscape for third-person shooters has changed immensely, but Max proves he can keep up with the best of them. At once a classic return to form and a brilliantly crafted shooter for the Uncharted and Gears of War age, Max Payne 3 wraps a gripping story, a convincing character study, slick presentation, remarkable gameplay, and addictive multiplayer into one glistening, grimy package. Simply put: Max Payne 3 is the best action film in years.