Mimana Iyar Chronicle is a role-playing game for the PSP that was localized and published by Aksys. The story starts when a young girl named Sophie hires the main character Crais to escort her to seven different parts of the world so she can collect gems. You spend most of the game going from the central town through various dungeons to collect these gems. Along the way, you meet others who join your quest for various reasons and gain some snippets of insight into what made Crais the wretch that he is today, but it’s a very generic and unrewarding plot. Unfortunately, the dungeons are winding and bland with no distinguishing features, much like the story; so you’ll often end up doubling back on yourself without realizing it. This becomes all the more tiring because the encounter rate is a little higher than it should be; so, you’ll be spending a lot of time in battle when you just want to get through the dungeon. At the end of each dungeon, you face off against a boss monster who protects one of the seven gems. These battles are harder than the general ones but still not very tough. Neither the bosses nor the random enemies are rarely difficult in terms of stats or abilities, but the battles take longer than necessary because…

Unfortunately, the battle system is pretty terrible, too. Once battle begins, you enter a screen where battles take place in in real time. You only control Crais during battle and the majority of your battle will be spent performing his 3-hit sword combination. You run up to an enemy and hit the X button three times, then run away before the enemy can counterattack. If you’re lucky, your attacks will have lined up properly and hit, if not, you’ll be standing there looking stupid while the enemy swings and misses back at you. Meanwhile, your other party members are controlled by artificial intelligence, but I use that term very loosely. You can set the other party members to heal or attack with magic or physical attacks; however, the AI does not try to stop them from getting hit. So, if you tell one of the characters to concentrate on healing, the computer will make them consistently cast heal spells, but they will stand there and get surrounded by enemies. You can also manually force the other party members to perform an attack, but the interface is rather clunky and many times it’s not as effective as your sword attack. Thus, most of your battle will be spent keeping enemies away from your compatriots since they can’t adequately fend for themselves.

The game would be a lot more enjoyable if the characters weren’t so grating. Crais, a penniless mercenary, is the first main character in a long time I’ve genuinely hated. He is a misogynist and often insults or berates his female party members for no reason. It’s hard to understand why they would want to stick together with him, even if the fate of the world rested in the balance. Most of the other characters have their quirks that bring some humor into the game, such as the sorceress who wants to see Crais naked and then dissect him, or the obsessive berserker with a terrible temper, but these are not strong enough to counterbalance Crais’ personality flaws. 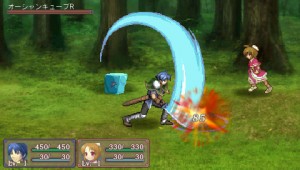 Perhaps the highlight of Mimana Iyar is the voice acting. Aksys did a fantastic job of the localization and the voice actors they used did a great job getting into character. Had Mimana Iyar been an anime series with these voice actors, it would have been fantastic. The characters and story are outlandish enough to make an entertaining series, but unfortunately, they are trapped inside of a very mediocre game. The music is mostly forgettable… when it’s even playing. There are many times where you will be travelling in a dungeon and there is no sound at all, which makes it hard to get engrossed into the game. During the dialogue sequences, the character portraits that are used look great, but the same can’t be said for the sprites used during battle. At times the battle sprites look decent, but sometimes they look a little funny. The sprites used when travelling the towns and dungeons are even further reduced in quality.They seem pretty low-resolution and grainy, which is unnecessary in today’s games, even on handhelds.

If you’re a masochist, the game does offer replayability in the form of endings with each girl in your party, but I wouldn’t recommend it. When it starts, Mimana Iyar Chronicles has a lot of potential as a game that could bring back those feelings of playing RPGs from the 90’s, but it unfortunately squanders it due to a sub-par battle system and a lackluster story. Aksys did a fantastic job on their end, but unfortunately for them, as the saying goes, you can’t make a silk purse from a pig’s ear.