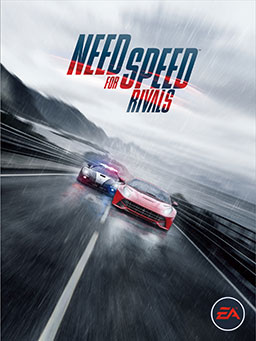 The Need For Speed series has proven consistently successful at two things: jumping from developer to developer and making the player feel like he’s about to break the sound barrier. Need For Speed: Rivals, the latest iteration, does both of these. Cool? I mean, that could be the whole review, right there: you drive expensive cars really damn fast and hope you don’t crash into immovable objects—screw you, cement walls—same as always. If all you wanted to know was, “yes, you’ll go fast,” you rascal, then you can stop reading here and buy the game.

However, if you’re so inclined to know, Rivals also does a whole lot more. The thing is, it’s not always clear why.

The selling point of Rivals is that it features an open world. Is it Skyrim with cars? Well, no. Despite the fact that the vast terrain—the miles and miles of winding roads—is basically a replication of the infrastructure of California, it starts to feel really small, really fast. Since you’re always Sonic-ing, you’ll cover the entire map in an hour, maybe two. If memory serves me right, it takes a minimum of 6,000 hours to cover all of Skyrim’s terrain.

The whole open world racing game thing has been before, in games like Burnout: Paradise—remember that subpar series?—and Need For Speed: Most Wanted. The kick in Rivals, however, is the connectivity. Log in to the EA server, if you can or dare, and you’ll find yourself put on the field with a bunch of other random racers!

So, then is it Battlefield or Call of Duty with cars? Well, no. Even though Ghost touts interconnected playability, it falls extremely short of the mark. I guess you could say, har har, that it missed the starting gun.

You and five other racers will be in the map. That’s… six? On a map of this size? Rivals is like playing a dying MMO. It teases you with the possibility of racing around the map, frequently getting rammed and slammed by fellow players—some fellow racers, others, cops. Instead, it’s a slightly lagged version of the normal game’s world, with the same, infuriating amount of AI-operated cars.

These cars—ugh, fuck these cars. It seems, at points—and, by points, I mean the entire games—that Ghost decided to create a a code for AI cop cars to be relentless, invincible, and just downright evil. I understand if police start cracking down on drivers going 160+ mph, but there have been many occasions when I’m traveling at or under the speed limit, and a gang of PoPo will try to ram me off a cliff and watch my carcass—both the smoldering flames on, and the life force within, its torso—suffocate on the bottom of the sea. 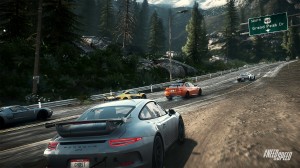 Rivals, unlike the many racing games before it, will make you feel the pain and brutality of every crash. Sure, every racing game, ever, has the cool graphical feature of sending a car spinning and flipping through the air upon impact. Burnout even turned their cars into myriads of shredded metal and glass. Rivals, however, takes it a step further.

Ironically, it is due to the game’s intrinsic beauty that the player will feel borderline-literal pain upon failure. I know, I know: the “Holy Shit Next-Gen Graphics Guys!” card has been played, by me in particular, like, a thousand times. But it’s a damn good card, that’s why. So, I’ll say it again: The game is a sparkling, iridescent slice of graphical design. This renders—pun absolutely intended—a world that looks more real, seems more real, and ultimately feels more real than any other racing game.

Then you hit meridian at a billion miles per hour and do eight barrel rolls before you crash into a tree, and realize that it’s only a game.

Just a pretty good one.

It seems I’ve been harping on this game, no? If that’s the impression you got, you’re right! I was harping. Still, the game is fun. For any of the randomly generated, or randomly online, cars that whiz by, you have the option to drive near them and challenge them to a one-on-one race. The game will procedurally generate a random race course; first to the end wins.

I’ve racked up a whole lot of silver medals from these.

In addition to these events, there are time trials (player races the clock), races (player races several other racers), hot pursuits (player races several other racers while avoiding, like, a thousand cops), and interceptors (player effortlessly tries to escape cops within a given time frame; getting anything but gold on any of these is honestly pathetic). You can access any of these events through three ways: aimlessly driving through the world, EasyDrive (more on that later), and the hideout-accessible world map.

Hideouts are your haven. They are your home. They are your safety. You will love them more than you loved your childhood home. From the hideout, you can personalize your vehicles—right down to an Adobe Creative Suite level of color customization—and pick where to begin your drive or race or whatever. In addition, if you’re being relentlessly pursued by Channing and Jonah police, you can enter a hideout, and the pursuit will end. Finally, hideouts are the only places you can fully pause the game. 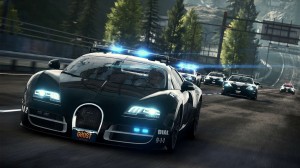 Oh, yeah. You can’t pause the game. I purposefully withheld this information until now, dear reader, because I figured you’d have thought, haha, fuck that, and clicked your little way to a different page. In any case, glad to know I still have your attention!

Not being able to pause really isn’t that bad. It contributes to that aforementioned realism—and the accompanying bone-shattering death that comes with it. You can’t pause the road in real life, after all. As you drive around in Rivals—note: this doesn’t happen in real life—you accrue Speed Points™. These are used to unlock and upgrade cars. Some cars get really expensive. Some runs you take, around the driving world, will accrue a lot of Speed Points™, which you’ll need to unlock these expensive cars. Totaling your car or getting arrested will make you lose your accrued Speed Points™ from that run, which is infuriating. At the same time, the Hideouts, when you successfully make it to them, add an ethereal sense of accomplishment to earning these Points™, you know, if you’re into that sort of thing.

If you’re not near or at a Hideout, there’s one last, awesome feature that will help you find races: EasyDrive. EasyDrive is an on-the-go system that allows you, albeit dangerously—because you really shouldn’t text and drive—to select and highlight routes to race events, Hideouts, and other players in the world. It’s a brilliant subversion and replacement of the traditional pause menu. EasyDrive takes a little bit to get used to—you’ll crash or get arrested a lot, at first—but, once you master it, it pays off. Trust me, trust EasyDrive, and you won’t even miss the pause menu.

All in all, Need For Speed: Rivals is a fairly decent, visually above par, and at times inventive racing game. You know exactly what you’re getting. It’s an “open world, ooo,” so maybe there’s a bit of a surprise every now and then. Ghost tried a few things, with no rhyme or reason behind them, forcing the player to take a step back and ask, Why?, and then subsequently answer his own question:

Why the hell not?

(Full disclosure: this review was written on a bus traveling, at most, 35mph.)